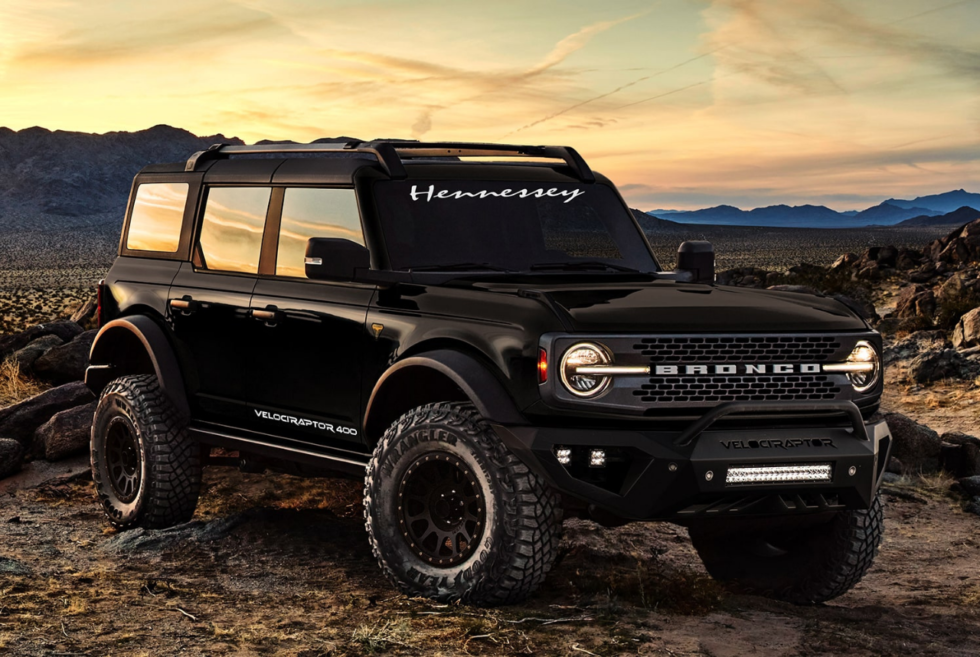 We knew that after the launch of Ford’s highly anticipated SUV, it was only a matter of time before aftermarket tuners would unleash something badass. Sealy, Texas-based outfit Hennessey Performance got their hands on one and worked their magic. What came in as a stock model now rolls out of their doors as the Velociraptor 400 Bronco.

Ever since the Blue Oval gave in to the demand of its consumers, the hype surrounding the new Bronco has been over the through the roof. After confirming its release date, preorders were reportedly overwhelming.

After showing us just how far they could push it in 2020 with the 750-horsepower VelociRaptor V8, Hennessey Performance is ready for another run. This time, work begins with a 2021 Bronco Badlands. The range-topping trim then receives a new intake and exhaust system on top of expert tuning.

This adds 75-horsepower and 88 lb-ft of torque to its 2.7-liter twin-turbo V6 power plant. What follows is an extensive calibration to squeeze every bit of performance out of everything. With these upgrades, the VelociRaptor 400 Bronco now boasts 405 horsepower at 5,700 rpm with 503 lb-ft of torque.

This 4×4 SUV also comes with an in-house Off-Road Package that includes 18-inch Hennessey wheels. These are then shod in thick 35-inch off-road rubber. Other rugged add-ons include retractable side steps, VelociRapter bumpers on both ends, and special badging.

Hennessey Performance keeps all of the SUV’s original off-road systems intact. You can order the VelociRaptor 400 Bronco in two or four-door configurations. If you want to own one, better hurry now because only 200 units are up for production.