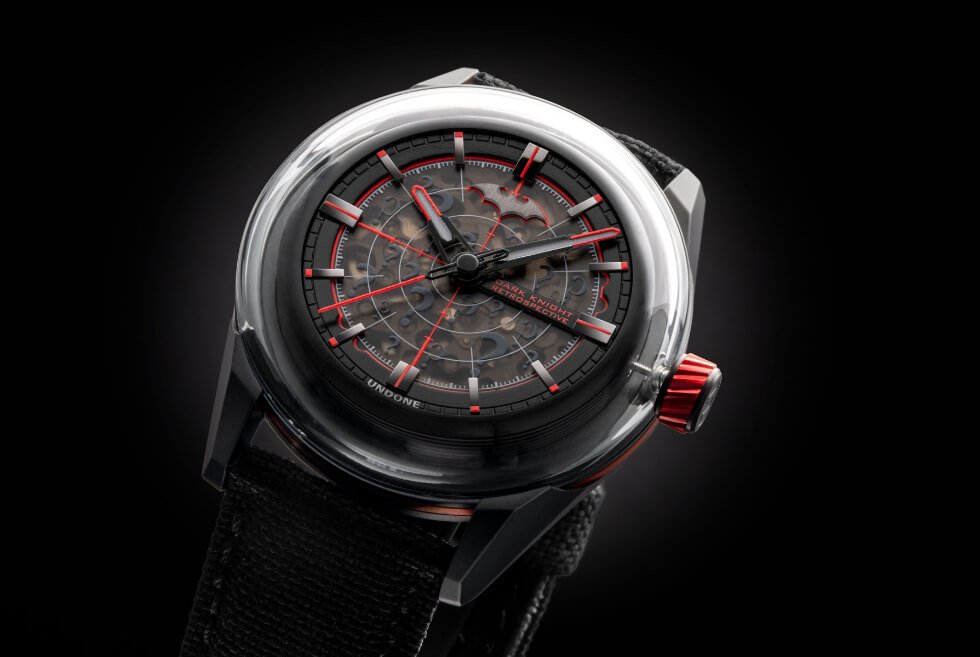 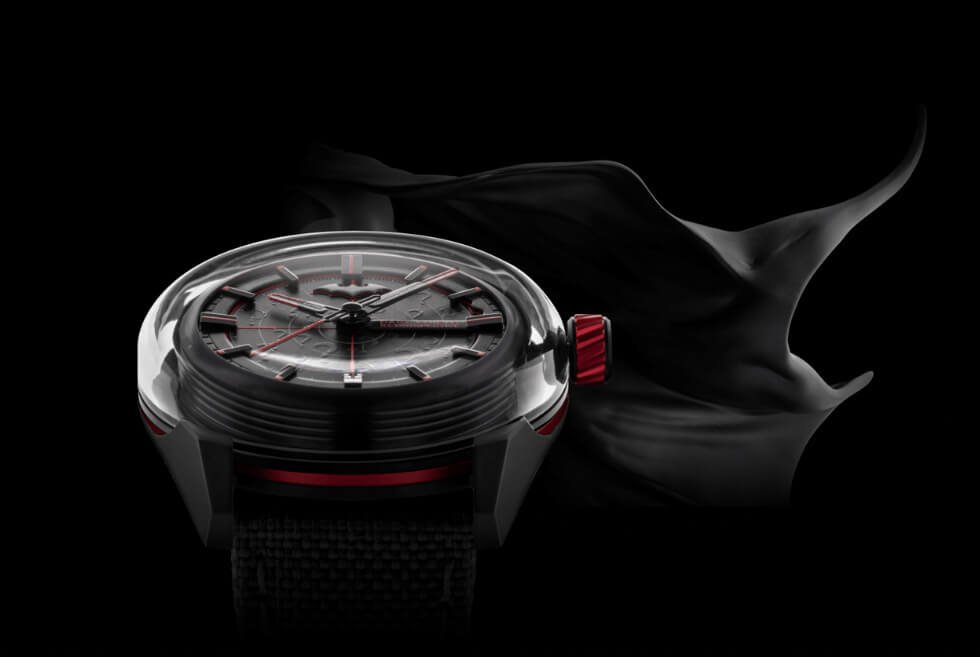 Batman fans rejoice! UNDONE is ready to spoil us once more with another timepiece tribute to Gotham’s stealthy superhero. The crime-fighting badass is back and will face a new villain in the upcoming film. But, before the movie drops, we have the Dark Knight Retrospective to look forward to. For this creation, the Hong Kong-based watchmaker goes with an avant-garde aesthetic.

Over the years, we’ve seen several models that pay tribute to both the villains and the Caped Crusader himself. We have several favorites among the bunch and this latest release just made our list. UNDONE says the 1960s Batmobile serves as the inspiration for the design. The donor vehicle was a 1955 Ford Lincoln Futura.

Up Close With The Dark Knight Retrospective 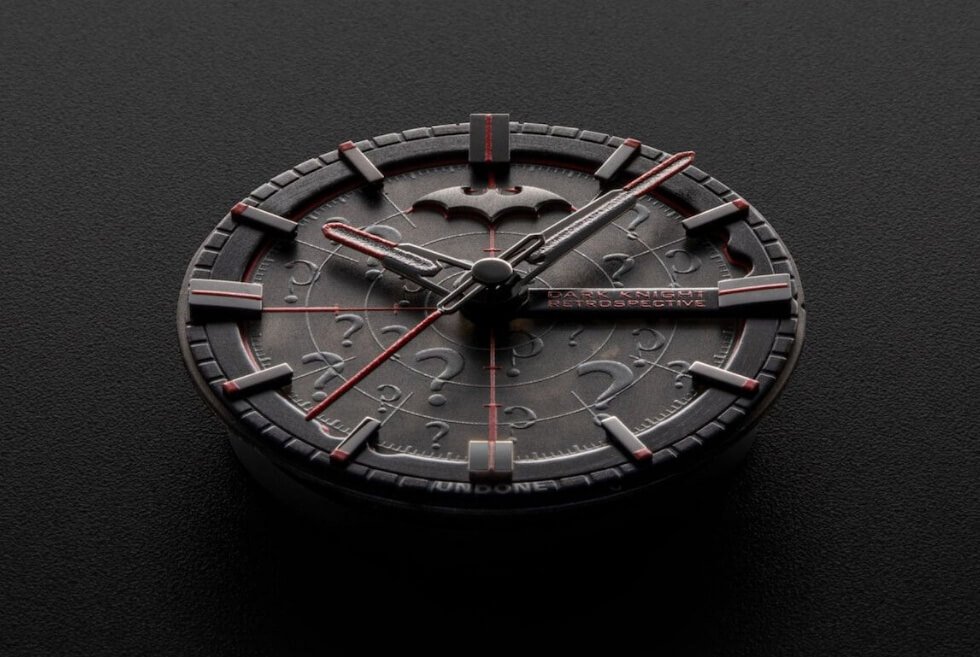 Look it up on Google and you’ll understand what the red accents are all about. Instead of going for a fully murdered-out colorway like their previous outings, UNDONE endows it with splashes of crimson. You’ll find these on the aluminum ring around the K1 crystal dome, the rifled band on the crown, and various elements within.

The 316L stainless steel case features a black DLC coat which gives it remarkable resistance against corrosion and the occasional bumps. The Dark Knight Retrospective measures 42 mm x 13.25 mm with a lug-to-lug length of 51 mm. What follows is the dial – crafted to resemble the Detect-A-Scope.

This tool was on the classic Batmobile’s dashboard back when Adam West portrayed Batman in the campy 1960’s TV series. Then there’s another awesome piece of the puzzle here as The Riddler is represented by multiple question marks. The lume lights up in the dark along with the hands, hour markers, minute track, and more.

Get up close and personal so you can view the inner workings of its sophisticated Japanese TMI NH72 mechanical skeleton self-winding movement rated with a 42-hour power reserve. To see more of the caliber in action, let’s flip on to another section of the Dark Knight Retrospective.

UNDONE’s black DLC coating extends all the way here as the exhibition case back reveals an outline of the Batman logo in red. The serialization is printed right under the badge which numbers up to 999 examples only. Finally, UNDONE equips the Dark Knight Retrospective with a black Cordura strap and a pin-buckle closure.

Our thoughts on the Dark Knight Retrospective 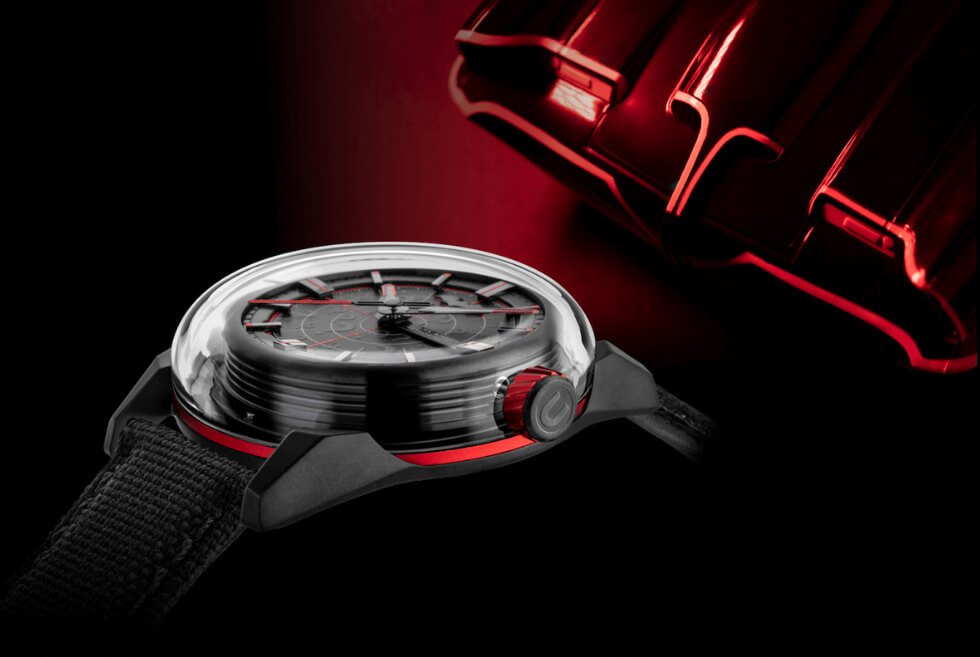 It’s clear from the overview that we can’t contain our excitement for this timepiece. We love how UNDONE continues to spoil us with regular refreshes based on the beloved franchise. The Dark Knight Retrospective is another must-have item for Batman addicts. Watch collectors, on the other hand, can’t go wrong with this purchase. So snap it up and rock it with your outfit when “The Batman” hits cinemas in early 2022. 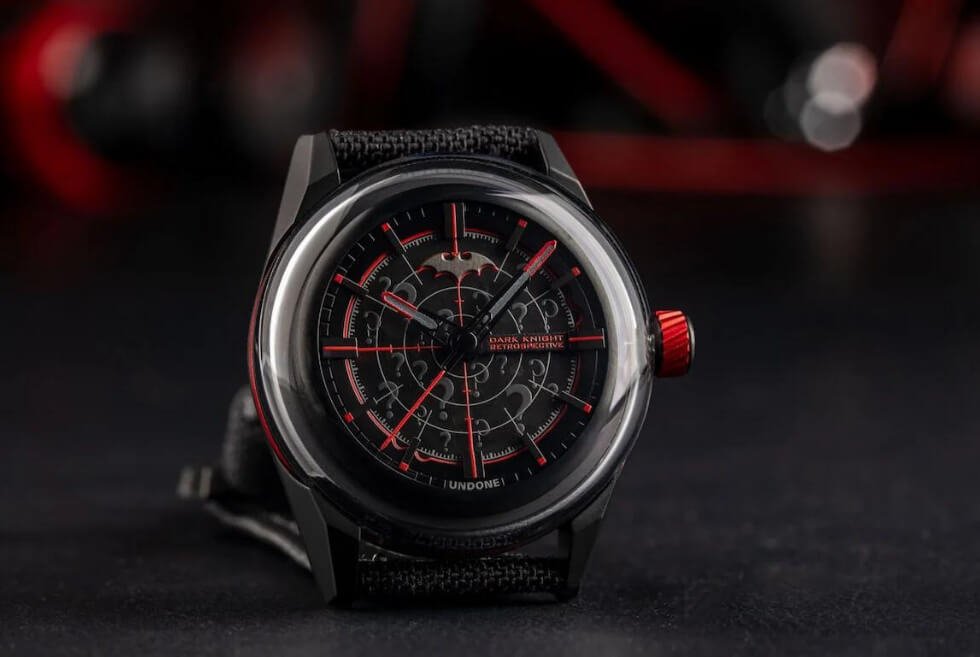 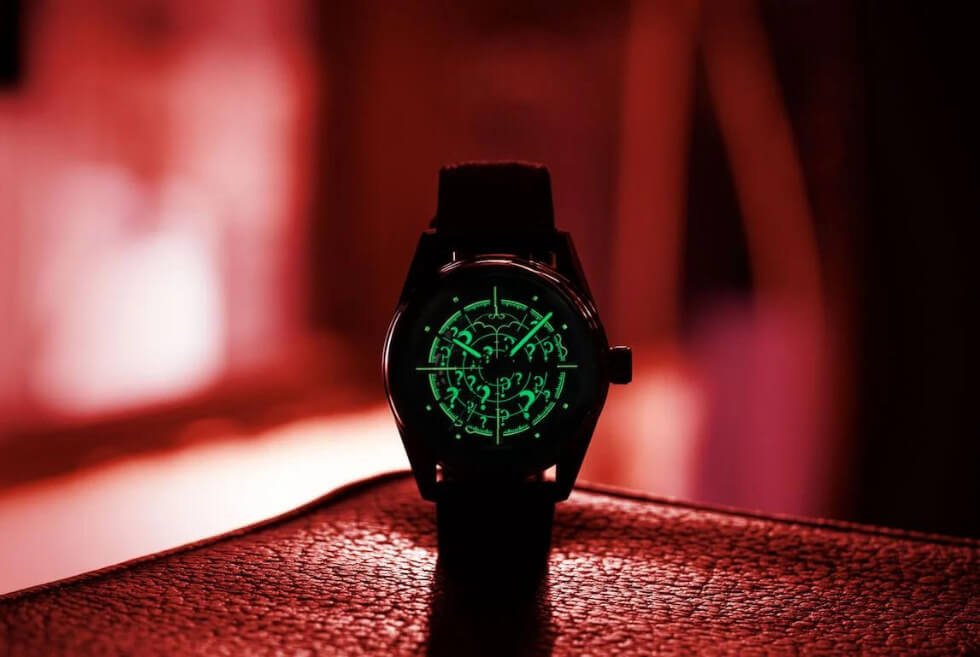 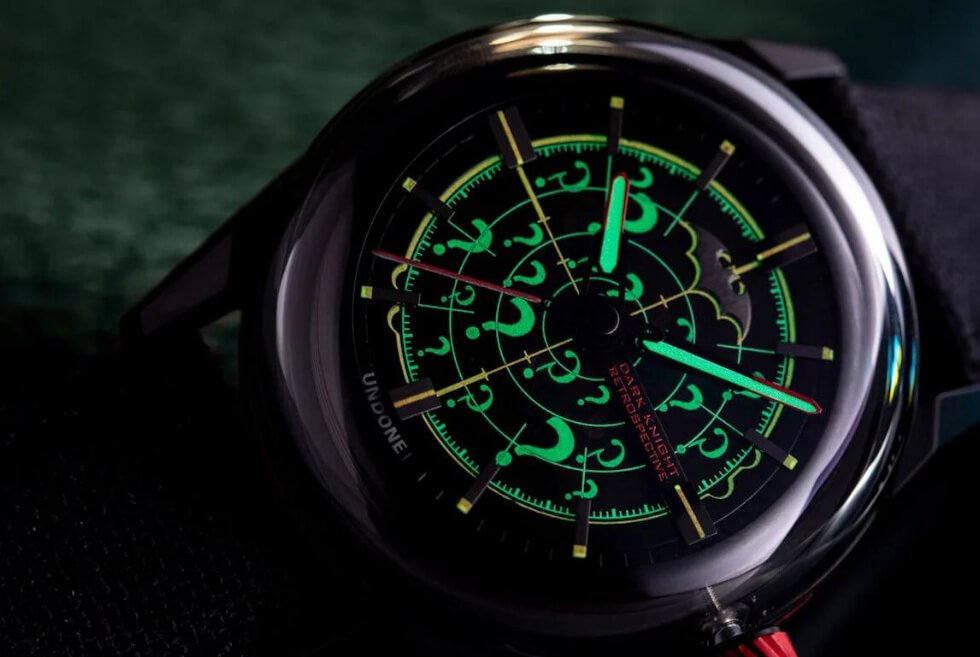 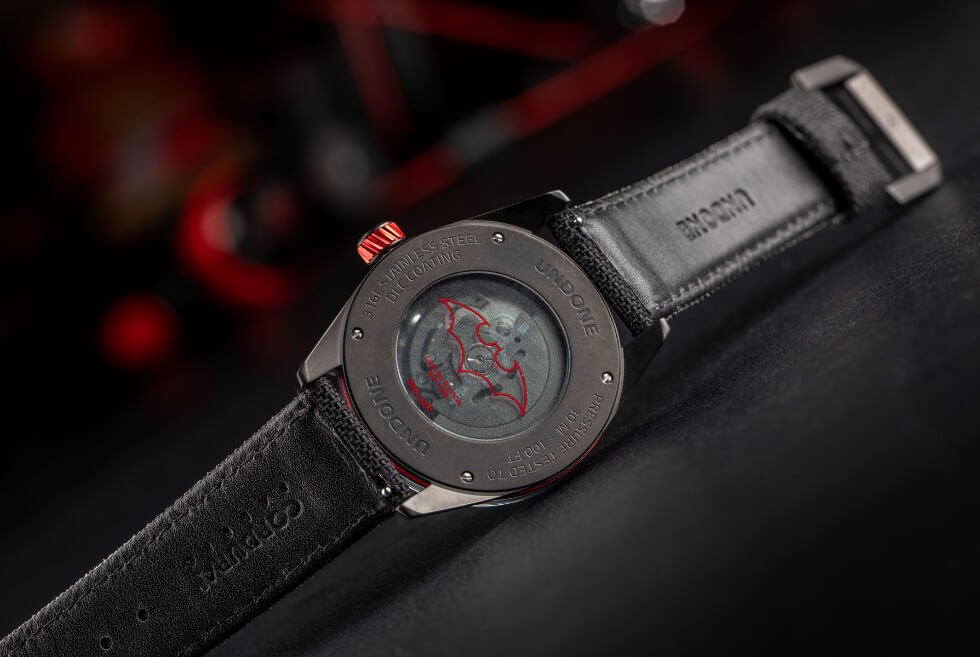 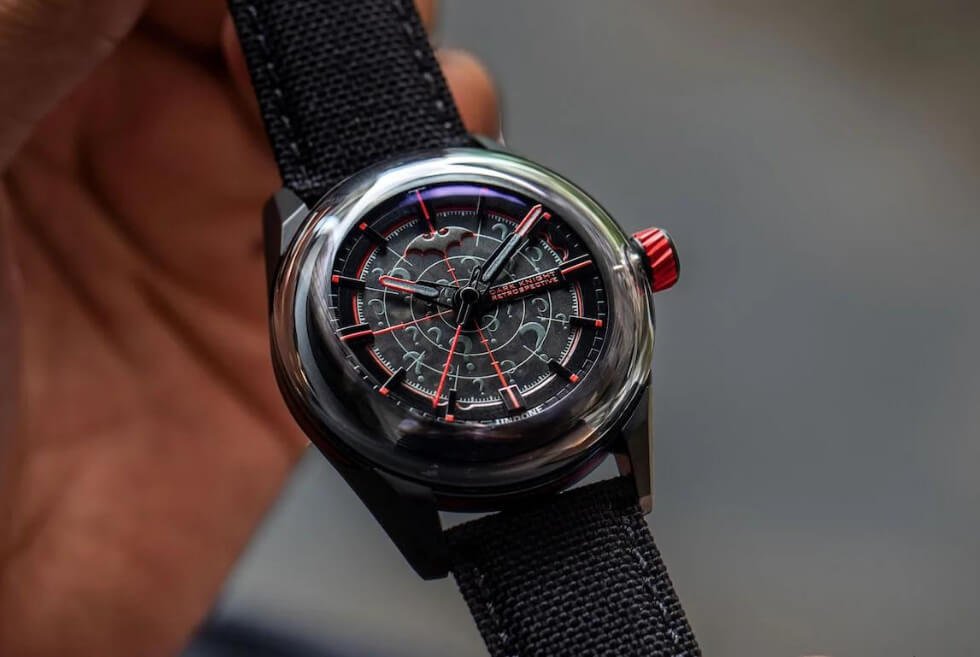 After the tasty "Neapolitan" colorway of the Air Max 90 Futura a few months ago, Nike goes for a simple white/red combo this season.

Uncharted Supply Co.'s The Seventy2 Survival System is a waterproof backpack that contains food, water, a first aid kit, warmers, electronics, and other essentials to stay alive in the critical 72 hours.