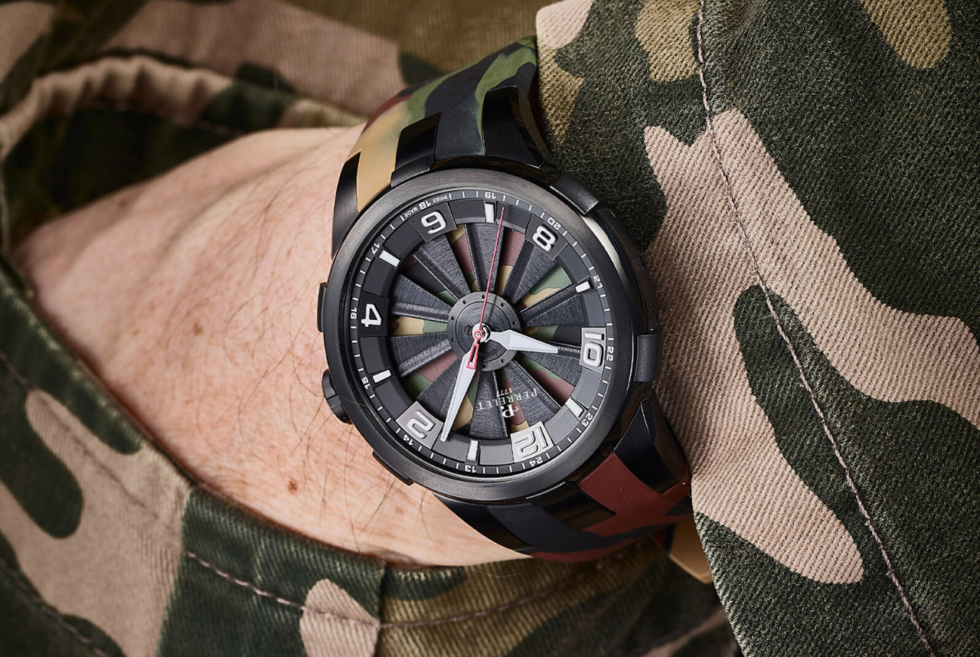 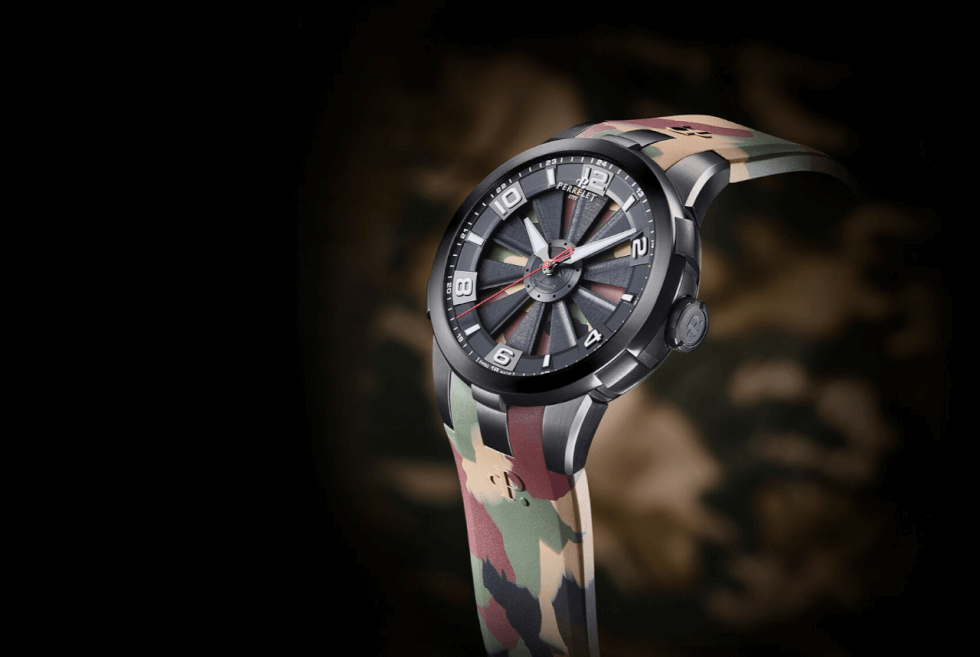 Aside from its reliable movements, Perrelet makes its mark courtesy of the stunning designs of their timepieces. Just recently, we had the opportunity to showcase the latest additions to its Weekend GMT lineup. Now, we have the pleasure to once again introduce a new entry into its prestigious catalog of watches. Recently making its debut is the Turbine Camo, which boasts a bold and modern aesthetic that will appeal to many.

Recognized among Haute Horlogerie circles as the creator of the automatic movement. A lot of improvements have been discovered and applied since the brand’s namesake – Abraham-Louis Perrelet – crafted the first self-winding calibre. Nevertheless, the performance and quality remain at the top of its class even to this day.

The principle of delivering excellence in watchmaking continues to this day. With the Turbine Camo, it shows Perrelet’s willingness to adapt to modern trends. Hence, this ensures that buyers like you always have something fresh, dynamic, and modern to look forward to. 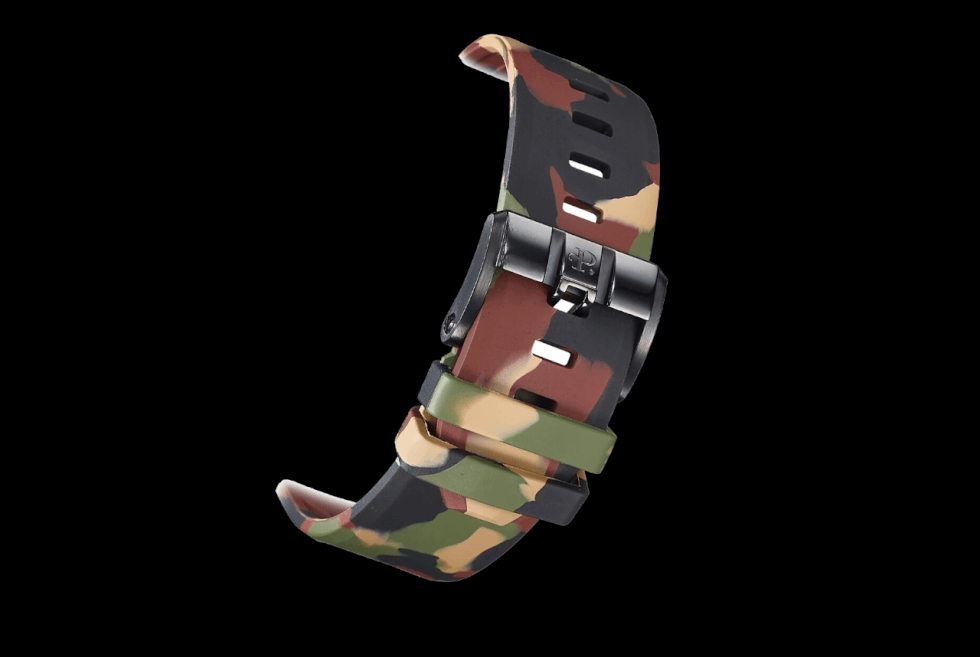 Those who were closely following Perrelet over the years will know that the Turbine first saw action in 2009. Since then, there have been many versions that were added to the original collection. The Specialties section now welcomes the Camo as the newest member of the family.

“Camo refers to Camouflage, a specific colouration or pattern that blends in with the surroundings for concealment. Used by many animals as a natural defence mechanism to avoid being spotted by predators, it was adopted by hunters in the early 1800s to blend in with the surrounding environment.” As defined by the company.

While the iconic palette of colours reminds us of the military, many fashion labels are adopting it quite stylishly. Perrelet executes its application with finesse as it blends with the robust elegance of the series. Furthermore, it allows the Turbine Camo to immediately stand out instead of going unnoticed. In other words, it becomes a wearable conversation piece for the user. 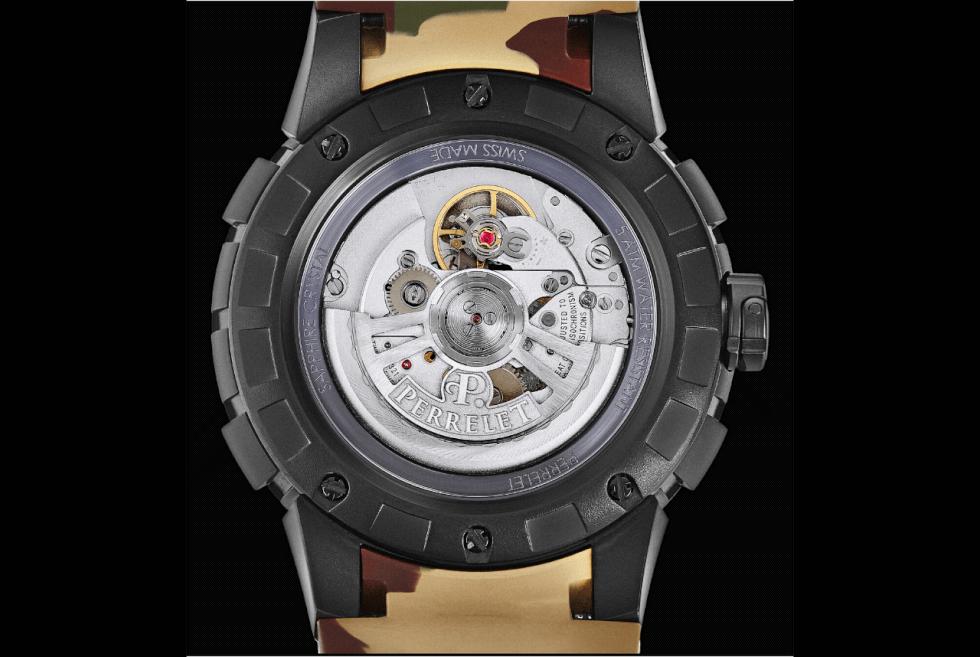 Since even the most rugged timepieces house intricate and sensitive components, watchmakers ensure that everything receives top-notch protection. For this model, Perrelet uses stainless steel but adds a black PVD coating to give it a stealthy matte finish. Meanwhile, the case band features vertical grooves that line the sides as well as the crown engraved with the brand’s emblem.

The round case measures 44 mm in diameter with a thickness of 13.3 mm. For superior readability even in direct sunlight, the sapphire crystals on the Turbine Camo have an anti-reflective coat. This gives users outstanding clarity as well as impressive resistance to scratches which come from normal use.

A glimpse of the open case back shows the limited-edition serial number engraving as well as six screws that hold everything together. The watch flaunts a 5-ATM water resistance rating, which is normally a standard for a timepiece of its caliber. 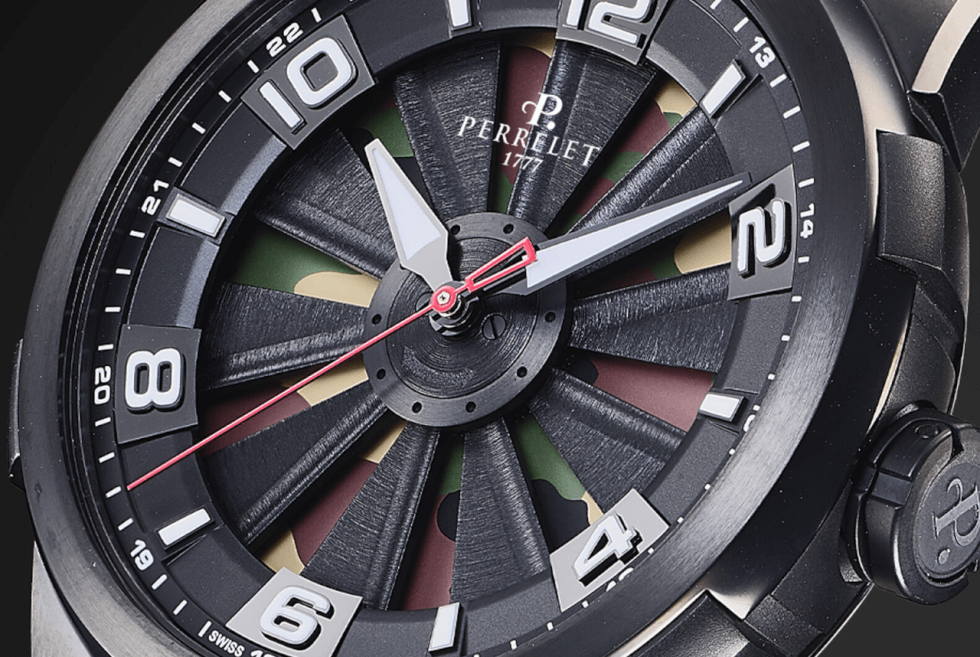 From afar, it might seem that the camouflage design is only on the rubber strap. However, upon closer inspection, you’ll see that the sub-dial behind the dynamic turbine dial sports its namesake pattern. Moreover, this becomes even more perceptible when the blades are in motion. This is perhaps one of the most mesmerizing mechanical elements you can get on a watch.

The Turbine itself moves in tandem with the oscillating weight. There are a total of 10 anodized-aluminum blades with tungsten counterweights. Much like the case, these also receive a black PVD coating not only for looks but also for protection. 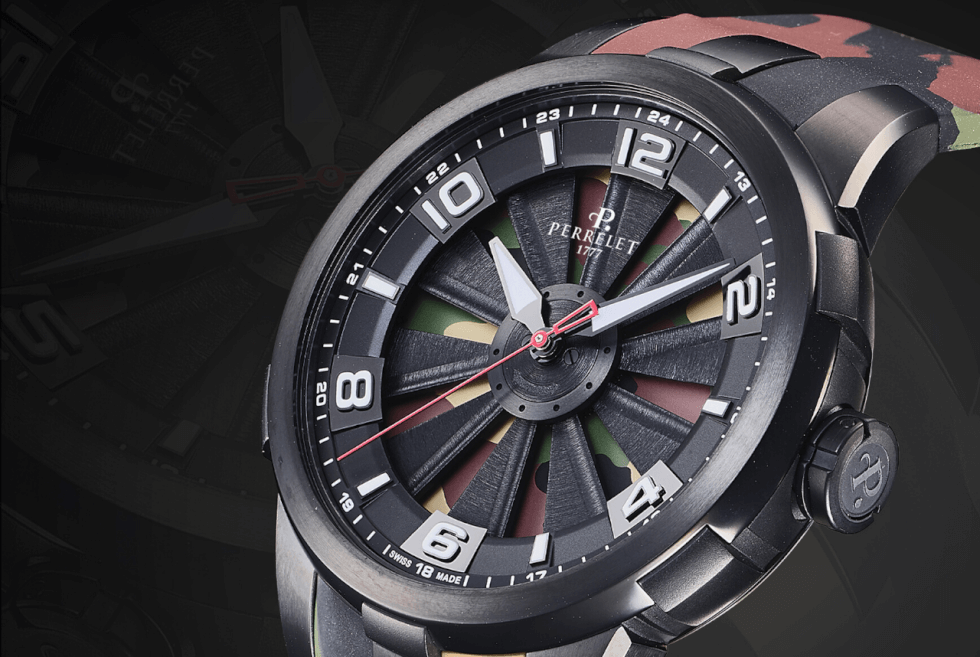 As for the indices, these are a combination of Arabic numerals and batons on each hour marker (1-12) on the inner section of the flange. Those on the outer ring (13-24) are all in Arabic numerals. To keep the details visible even in low-light conditions, the hour and minutes hands receive a coating of white Super-LumiNova in addition to the indices. Equally notable, is how Perrelet adds a subtle contrast with the second hand in a shade of crimson. 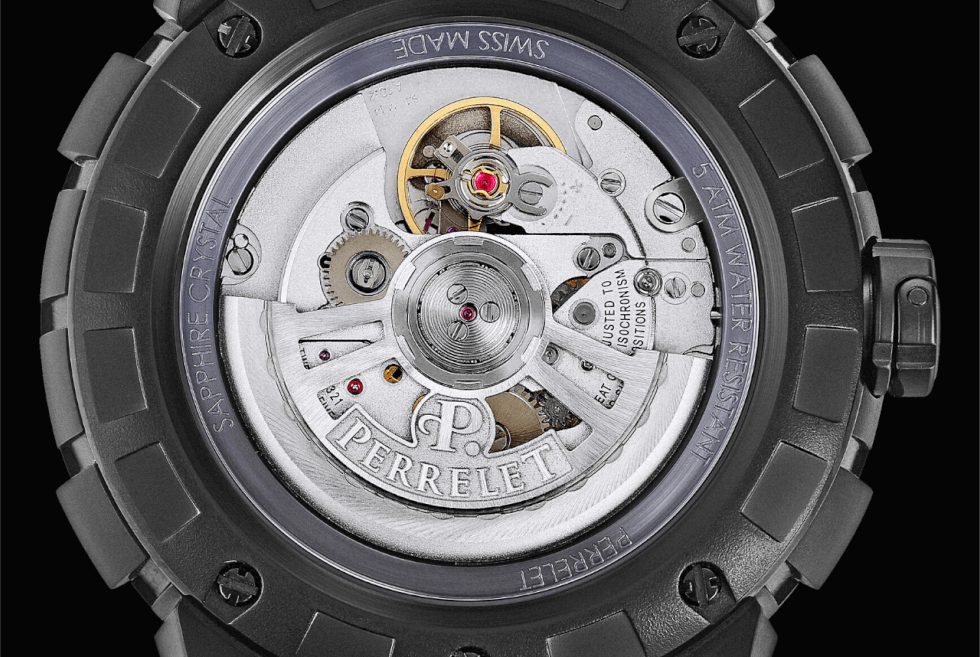 For a watchmaker that specializes in automatic movements, its commitment to quality assures owners the best experience. Therefore, this timepiece houses Perrelet’s self-winding Calibre P-331 with Turbine Technology. The 25-jewel movement runs on a frequency of 28,800 vibrations per hour (vph).

Earlier, we highlighted the unique spinning blades on the dial. The mechanism responsible for its movement is the openwork rhodium-plated rotor which is ornately embellished with the house logo. It’s on full display along with the 42-hour power reserve indicator through the exhibition case back. We’ve given you all the right reasons to own the Perrelet Turbine Camo already. Hence, we urge you to take action as soon as possible because only 100 examples will see production. Collectors will undoubtedly want one and it won’t be long before each one is spoken for.