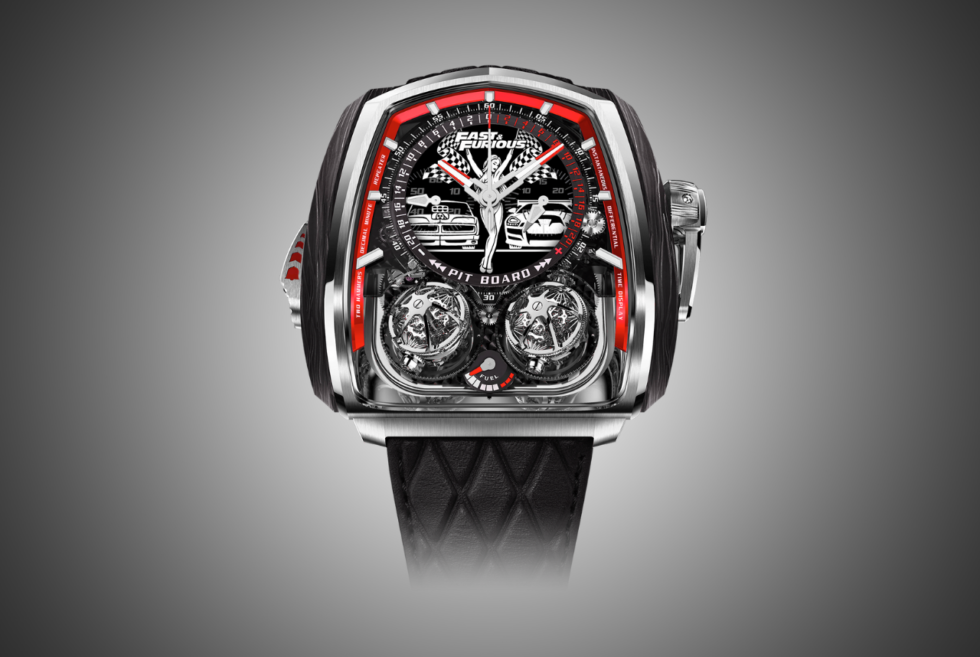 Jacob & Co makes some of the world’s most intricate and luxurious watches. What sets them apart from their contemporaries is the avant-garde designs of their timepieces. Moreover, the intricate details that go into each one are remarkable. Their most recent release is a tribute to a long-running movie franchise. The Fast & Furious Twin Turbo lives up to name with its automotive theme.

This watch does not only boast a high level of luxury you associate with the brand. The features it packs are likewise impressive. According to Jacob & Co, it’s the first time four sophisticated complications are packed together. There’s a monopusher chronograph, a twin triple-axis tourbillon, and decimal repeater.

Many experts point out that the latter is a grueling task for any watchmaker to handle Moreover, this makes the Fast & Furious Twin Turbo a very special 832-component model. Generating the horsepower behind the scenes is a Jacob & Co JCFM05 manual movement with a 50-hour power reserve.

It is an awesome expression of high watchmaking for the elite and fans of the films. The visuals on the semi open-work dial show a lovely lady holding two checkered flags with two iconic vehicles ready to race. Meanwhile, Super-LumiNova coats the indices and hands for superior low-light visibility.

Then there are the two triple-axis tourbillons flanking the power reserve indicator which looks like a fuel gauge. The Fast & Furious Twin Turbo sports a 57 x 52 x17 mm titanium and carbon case with a curved sapphire crystal.

The exhibition caseback lets you view the caliber in action. Finishing it off is a black leather strap with a titanium deployant buckle. Jacob & Co is only making 9 examples of the Fast & Furious Twin Turbo to commemorate the release of the ninth film in the saga.

Outerknown's Chroma Blanket Shirt comes in a 100% heavyweight organic cotton fabric that's not only cozy and comfortable but also wrinkle-resistant.

The Teva Hurricane Verge Sandals Is For All-Terrain Wear