Ever wondered where the blessed black elixir of energy, otherwise known as coffee, came from? We love it, we enjoy it daily, but do we know it? Apparently, the history of coffee can be traced back to the 15th century, though some legends and tales speak about its existence even before the 10th century. Most experts agree that its origin was in Ethiopia, from where it gradually spread across the globe: first to the Middle East, then Europe and Indonesia, and finally the Americas.

From the very beginning (as far as history shows), coffee was served not only in people’s homes, but also in various public establishments, which were early versions of today’s always crowded coffee houses. People would gather there not only to enjoy the energizing drink, but also to socialize, play chess, watch performances, or just chat.

There were several periods throughout history when drinking coffee was banned by various conservative institutions because of its obvious stimulating effects. But nothing could replace the wonderful aroma of freshly roasted coffee, and people always found their way back to it.

Today the coffee culture is so widespread that there is virtually no country you can go to where the delicious hot drink is not available. Furthermore, people’s tastes have become more discerning over time, which means that regular consumers are increasingly picky about the variety of beans out there. We are happy to tell you a little something about some of the best coffees in the world.

The story of the award-winning Esmeralda Special Geisha coffee is truly remarkable. The trees that produce its uniquely-flavored beans have been on the Petersons’ coffee farm for decades, but the owners didn’t know that for a very long time.

They were already producing excellent coffee at their Panama estate, and as part of the quality management process, they had regular tasting sessions. It didn’t take long for them to notice that about one in one hundred cups had a distinct and delicious flavor of jasmine, sweet orange and milk chocolate. It was amazing, and they didn’t know where it came from. So they decided to find out.

After a thorough search throughout the farm – one that lasted for about a year – they finally identified the source of their best coffee beans. It was a batch of trees that turned out to be of ancient heirloom. How the variety ended up in their farm has remained a mystery, but their magic beans have been carefully harvested ever since. They produce what some people believe is the world’s best coffee. It certainly is one of the most expensive.

Large companies need to battle one another at auction in order to secure a few lots of this sparkling coffee. With bids starting at $15, there is no telling how high the price can go. In 2013, for instance, the Beijing Wholly Coffee Company won the bidding war with $75 per pound, meaning that they ended up paying $22,650 for 300 lbs. of the rare Esmeralda Special Geisha.

Popularly known as civet coffee, this is arguably the most expensive coffee in the world, but also quite possibly the most disgusting one. What makes Kopi Luwak so special is the fact that the beans are sourced from animal feces, more specifically Asian palm civets. The process is quite straightforward: the cute little mammals eat the red coffee berries, and later on they eliminate them. The coffee beans are still intact after digestion, so all they need is a good wash and roast. 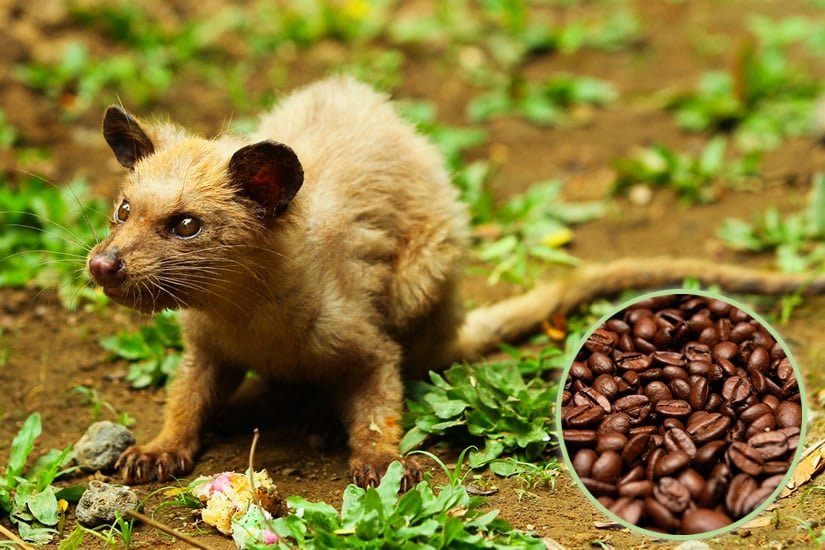 Unappealing as that may sound, the digestion process reportedly increases the flavor of the coffee, giving it a unique heavy taste with hints of chocolate and caramel. Not everybody agrees on that, as quite a few experts have stated that Kopi Luwak is famous not for its quality, but for its interesting story. 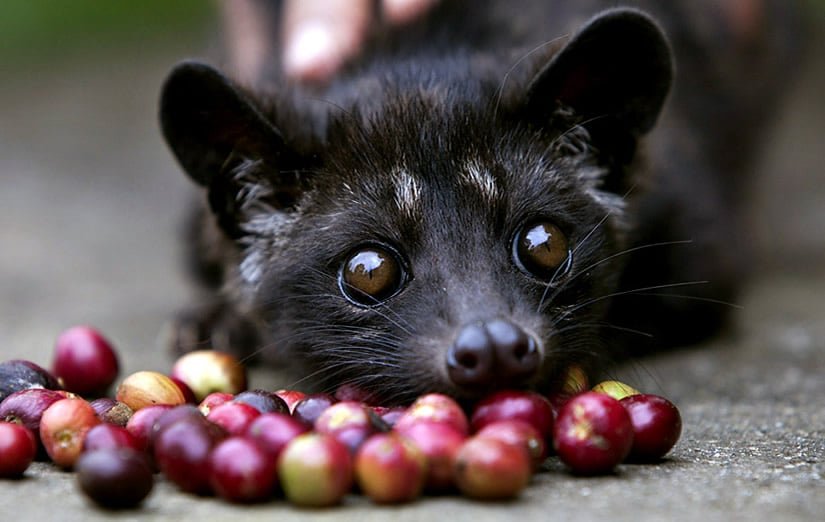 Prices can go as high as $1,500 for one pound of civet coffee, and that was originally justified by the rarity of the beans. People would go and look for civet feces and collect them by hand, which took a lot of time and effort. In time, though production has shifted from wild civets to caged ones.

This has led to a decrease in price, but also in quality, as the animals are usually kept in poor conditions. Also, the caged civets are force-fed, which means that they no longer get to choose the ripest and most appealing of berries. In order to avoid animal cruelty situations, some producers have started to replicate the natural digestive process and replace it with various enzyme baths for a similar effect on the actual beans.

The first Green Tipped Bourbon Coffee seeds were brought onto the St. Helena Island back in 1733. They blossomed beautifully on the island and the locals used the beans to brew a truly delicious coffee. However, the world-wide fame St Helena Coffee now enjoys is not only due to its superior taste, but also to a fortunate Napoleon quote. When exiled on the island in 1815, the emperor found only one enjoyable thing in his predicament: “The only good thing about St. Helena is the coffee”, he famously once said. 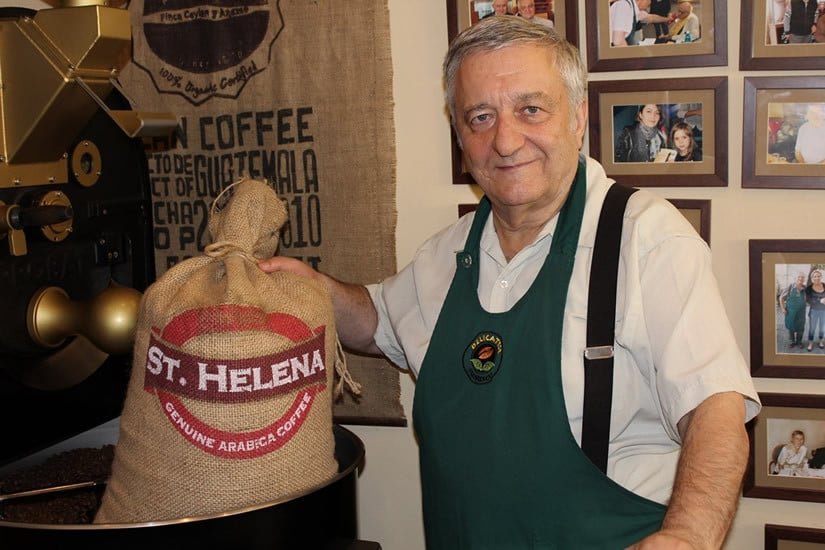 Soon afterwards, the delicious yet rare coffee began its journey to Paris and other cities of the world. Due to its scarcity and unique fragrant bouquet of caramel and fruity hints, it quickly became the world’s most expensive coffee, selling for a record 1d (old British pennies) per pound in 1845. 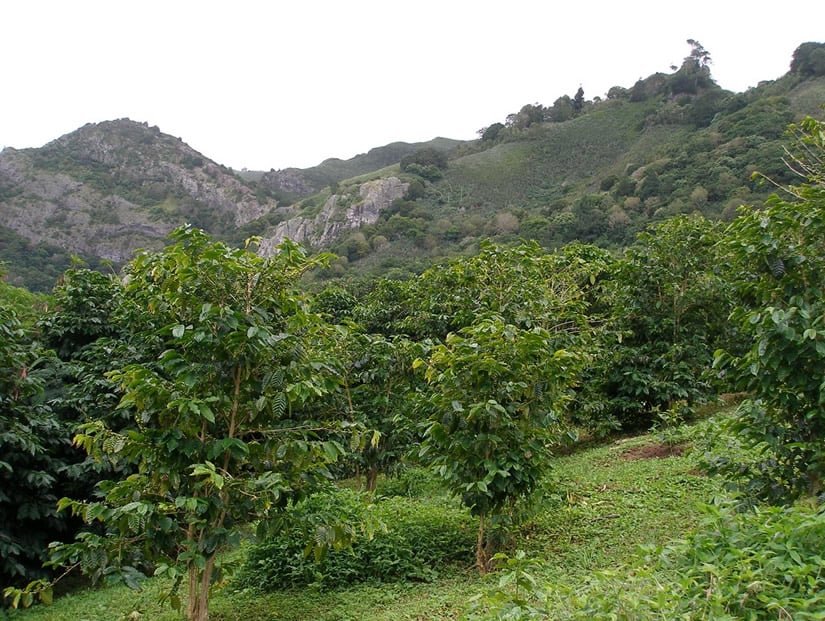 Still one of the rarest and most expensive varieties on the market, St. Helena Coffee’s production involves a remarkably rigorous quality control. Given that it is farmed in relatively small quantities, the process allows for more thorough testing than what the industry usually ensures. There is virtually no such thing as a “bad batch” of St. Helena Coffee. 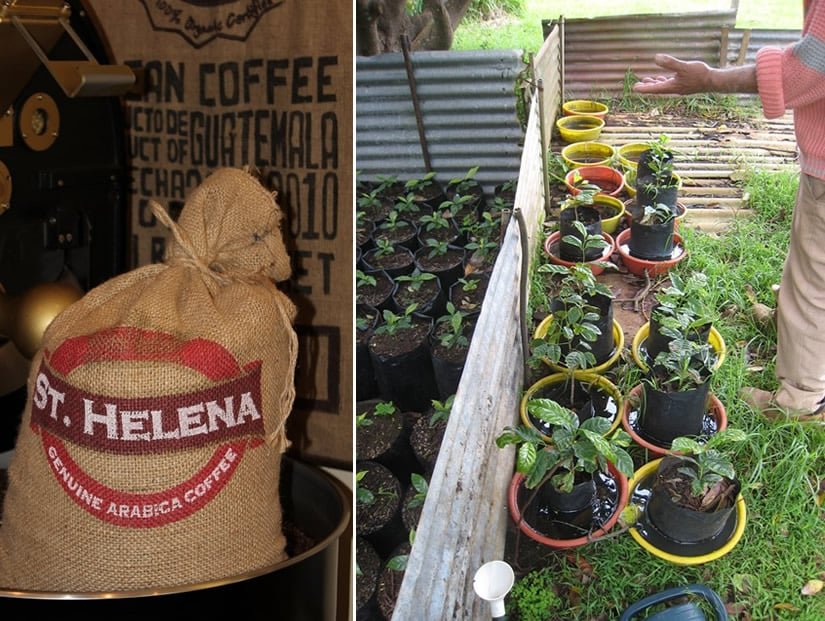 The only US territory with perfect conditions for coffee farms is Hawaii: it has the ideal climate and soil for the trees to thrive in. Unsurprisingly, some of the world’s best coffee beans can be found there, in a number of varieties. One of them is the world-renowned Molokai Coffee, which grows on a 500-acre farm.

Moloka‘i Coffee plantation from the air

Its rich aroma enchants with floral and berry hints, as well as a touch of caramel and herbs. Slightly acidic, it lingers on with a lovely chocolaty finish. This is a rare organic coffee, which makes it one of the most expensive coffees in the world, priced at around $50 per pound. Because Molokai Coffee is difficult to come by, the surest way to get some is to order it directly from the company website. 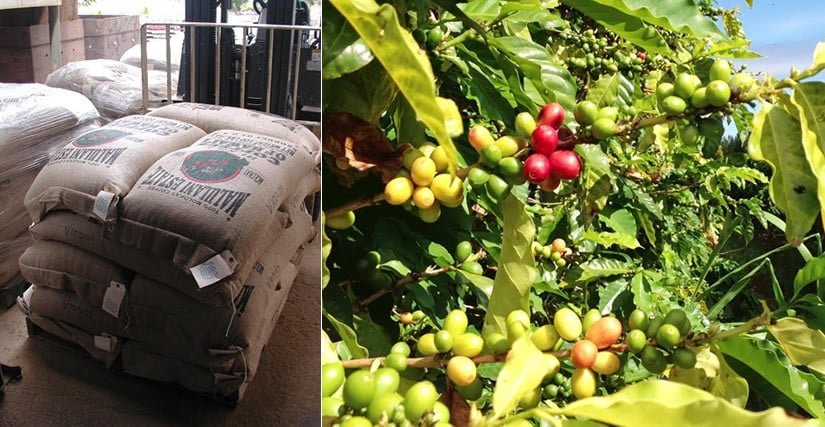 Growing at high altitudes in the Blue Mountains of Jamaica (5,000 feet above sea level), the coffee trees are blessed with plenty of rainfall, which gives their berries and beans unique properties. The high levels of water in the atmosphere and soil plump up the plants, which is the main reason for the famously mild and non-bitter aroma of Jamaica Blue Mountain Coffee. It is also the reason why people love it and are willing to pay about $50 for one pound of coffee.

The cultivation of these particular trees is carefully monitored by the Coffee Industry Board of Jamaica, which is also responsible for deciding which beans are allowed to bear the globally protected label of Jamaica Blue Mountain Coffee. Consequently, as a customer you can always be certain that the exquisite smell of freshly roasted coffee is always matched by the deeply satisfying taste that follows. 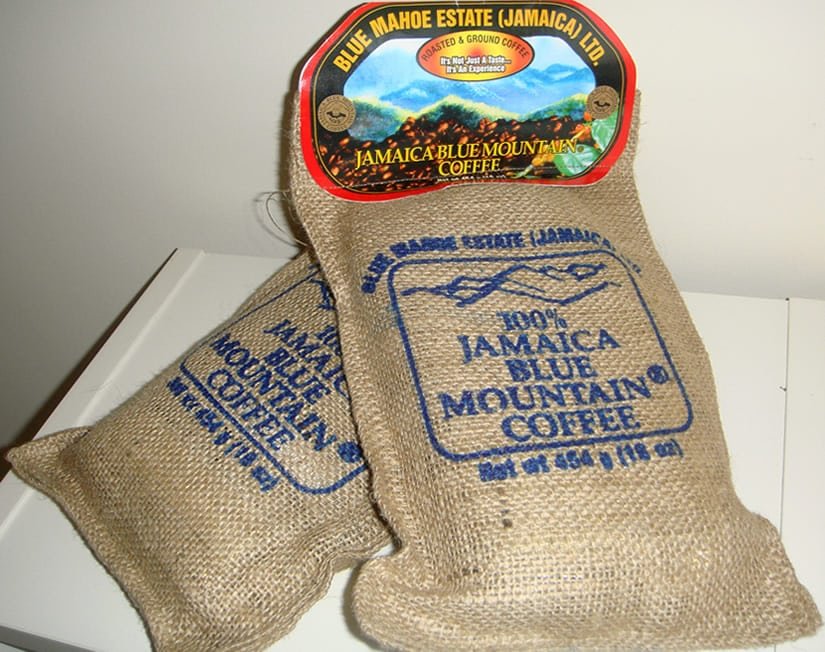 337 Belvedere Avenue: Luxury Island Living Can Be Yours For $31 Million

The 337 Belvedere Avenue home is seven floors of opulence that even boasts exceptional views of the bay and more.