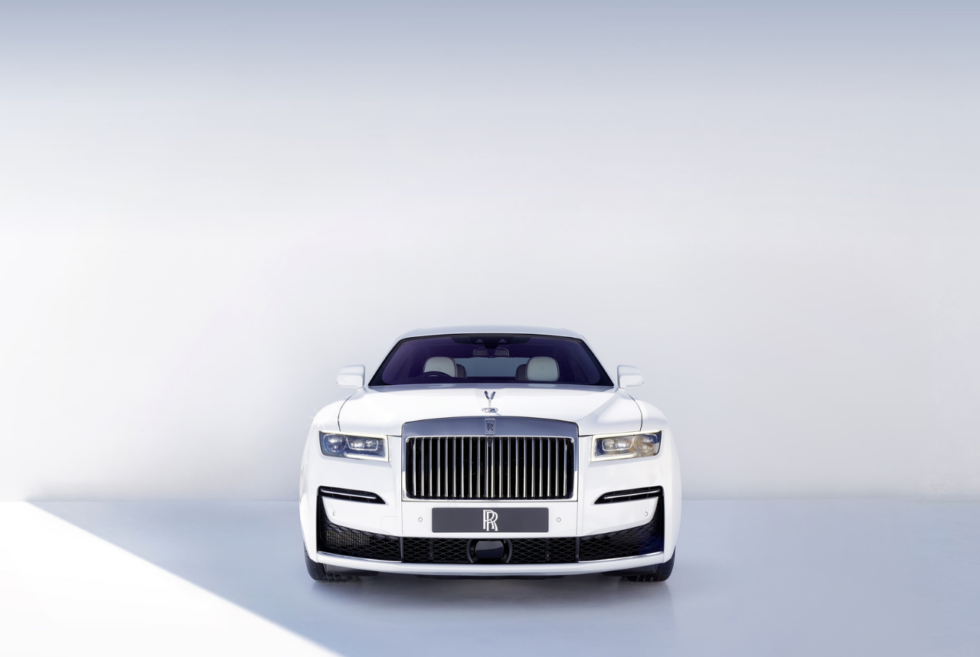 In the build-up for releasing its all-new Ghost, Rolls-Royce is doing a masterful job of releasing just enough information to whet our appetites. The luxury car manufacturer recently revealed an illuminated fascia feature that looks like it’s going to be stellar, and we can’t wait to see the finished product.

The new feature is a follow-on of the sought-after Starlight Headliner that incorporates between 600 and 1340 hand-placed fiber optic lights in the car’s interior roof lining. The fascia expands on this starry night sky theme on the passenger side of the dashboard.

Designed to resemble a cluster of stars in space, the illuminated fascia results from 10,000 hours of hard work in two years. It uses 152 LEDs, light guides, and other materials to create the nameplate’s 850 stars. When off, the stars are invisible, but it creates an impressive night sky display on the car’s interior when activated. In addition to this dashboard feature, the Starlight Headliner will now include eight shooting stars in its design.

The British marque has kept quiet about almost everything else, which means that most of what has been written about the car that is soon to make its debut is educated guesswork.

This is our take on the Rolls-Royce Ghost.

From what we’ve seen so far, the 2021 Ghost will look similar to the outgoing model – at least from the outside. This will be one case where looks are deceiving because it will be entirely new, from the underpinnings up. We’ve got a feeling that the starry fascia is the tip of the proverbial iceberg and that the cabin of the new model will be far more luxurious than what we’ve seen previously.

Getting Under the Hood

Until now, the first and second-generation Ghosts used the same platform as the F01 BMW 7 Series. According to reports, Rolls-Royce confirmed that as many as 20% of the Ghost’s and the BMW’s parts are identical. That will change with the launch of the new Ghost, which gets a new platform of its own.

As far as the engine is concerned, it’s likely that the vehicle will be powered by a V-12 that surpasses the Cullinan SUV and Phantom. Both these models boast a 563 horsepower, 6.7-liter V-12, with 664 lb-ft of torque. The outgoing Ghost has a 6.6-liter V-12 modified from the BMW N74 V-12 and clocks in a top speed of 155 mph. However, even with a more powerful engine, the car is not a sports sedan. It remains a luxury ride, a powerful one, but a luxury ride nonetheless.

The manufacturer hasn’t said anything about the new Ghost’s fuel economy yet, but we wouldn’t be surprised if it will be in a similar league to the outgoing model, which travels 100 miles on 7.1 gallons of fuel.

A Cabin That’s Out of this World

The starry dashboard is the only clue to the new model’s interior that Rolls-Royce has given us. While some commentators think that the cabin’s interior will surpass the opulence we’ve seen before now, others believe that the manufacturer has gone in a post-opulent direction. The luxury will be there, but it will be understated rather than showy.

There is no question in our minds that the brand has used only the finest materials and will ensure the traveling experience will be indulgent for both driver and passengers. However, the ride will be dignified rather than pimped. We’re expecting to see massaging seats, fine leather, beautiful metal and wood accents, and a ridiculous amount of space. No doubt, the onboard entertainment will also be top-class.

The outgoing Ghost has some impressive safety features, and we think it’s highly likely that Rolls-Royce will take them up a notch in the new model. A few of the outgoing model features include Electronic Stability Control, Roll Stability Control, and forward-collision warning. Airbags and airbag occupancy sensors and a back-up camera come standard too, and satellite-assisted transmission is one of the driver-assist features. We suspect the new model will retain those features and will see the addition of others. Lane-keeping assistance, lane-departure warnings, adaptive cruise control, and automated emergency braking with sensors to detect pedestrians could all be integrated.

Rolls-Royce hasn’t skimped on connectivity or infotainment in previous models, so the new Ghost is likely to have features that will make our jaws drop. The outgoing model gave rear-seat passengers the ability to use the navigation system and control the radio from the dual-screen entertainment system. We expect to see more of the same, as well as the addition of features such as Android Auto, Apple CarPlay, and a Wi-Fi hotspot.

Previous models of the car have come with a four-year warranty and unlimited mileage maintenance package. We expect that the same will be in place with this vehicle.

The original Ghost made its debut at the Geneva Motor Show in 2009, when it was unveiled as the Rolls-Royce 200EX. In the same year at the Frankfurt Motor Show, the vehicle was named the Ghost in honor of the manufacturer’s Silver Ghost, a car first produced in 1906. The Ghost was designed to be a smaller version of the brand’s Phantom, making it something of an entry-level car – for those who can afford it.

After BMW licensed the rights to the brand name in 1998, the production of Rolls-Royce cars shifted into high gear. The manufacturer introduced its premium style and manufacturing precision that is now seen in cars like the BMW M4. In 2014, the Series II Ghost was introduced at the Geneva Motor Show, featuring various changes inside and out. A tapered wake channel was added to the bonnet, the front air intakes were enlarged and had chrome inserts added, and the headlights were given a sculpted makeover. The interior saw new seat designs and re-angled rear seats, the clock fascia and instrument dials embellished with polished chaplets, and natural grain leather for the A and C pillars. Series II also included new rear hydraulic axle bearings, re-designed front and rear struts, new steering gear, and adjusted dampers.

There’s no doubt in our minds that the new Rolls-Royce Ghost will be a thing of beauty and luxury. Like its predecessor, it’s sure to deliver a luxurious driving experience that inspires greatness and creates an everlasting expression of the exceptional.

The Now is currently just an idea in digital space, but Piredda & Partners will likely find someone crazy enough to fund it into reality.