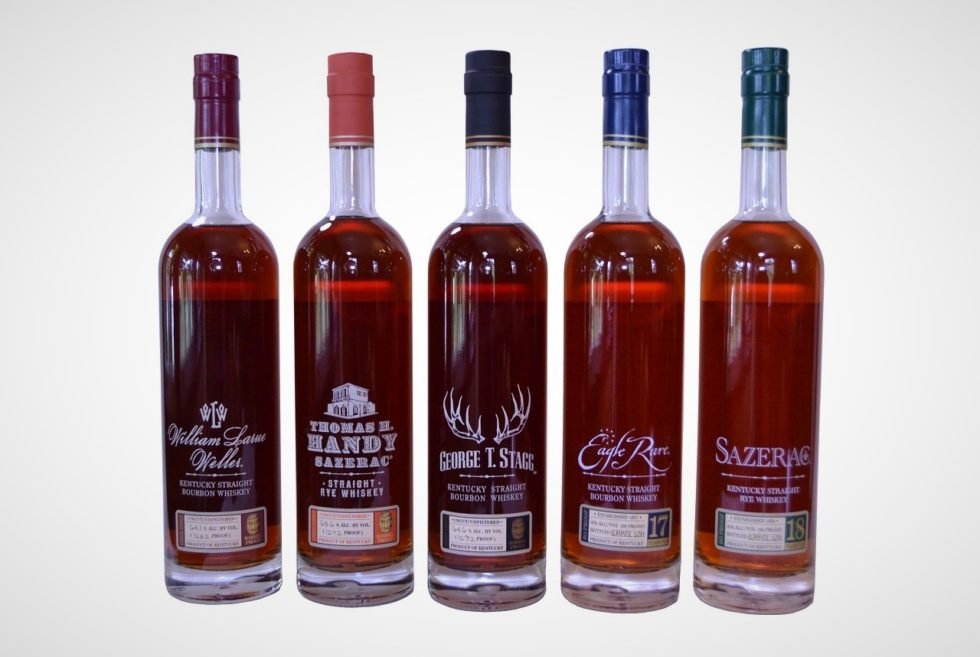 Kentucky’s Buffalo Trace Distillery has once again gathered an exquisite selection of five of their rare aged whiskeys to fill the rolls of their 2017 Antique Collection.

Filled in 2002, the 309 barrels of uncut and unfiltered ‘George T. Stagg’ weighs in at 129.2 proof. Notes on this Kentucky bourbon whiskey include the tastes of espresso, chocolate fudge, and tobacco.

The ‘William Larue Weller’ is a wheated recipe bourbon that was distilled in 2005 and registers 128.2 proof. Flavor notes are of toffee, marshmallow, and leather.

‘Thomas H. Handy’ is an uncut, unfiltered straight rye whiskey they distilled in 2011 at 127.2 proof. The flavor has been described as figs, allspice, and cinnamon.

The ‘Eagle Rare 17 Year Old’ bourbon, begun at the turn of the century, has been bottled at 90 proof and is described as tasting of oak, tobacco, toffee, and vanilla.

The fifth selection, the ‘Sazarac Rye 18 Year Old’ was barreled in 1998 and finished in a stainless steel tank in 2016. It is said to taste of leather, clove, and allspice.

Available in October, the Buffalo Trace 2017 Antique Collection is distillery priced at $90 per 750 ml bottle.

The all-in-one LĒVO II can infuse up to 16 ounces of liquid with a mix of your favorite herbs minus any unhealthy additives.

With the CREAMi in your kitchen, say goodbye to store-bought ice cream and say hello to fresh homemade ones anytime you want it.