From the same folks that built a vinf on the bater, this Bridge House hovers above a small river on a farm. Don’t take the placement a precarious choice, though. This thing can apparently withstand harsh winters. It’s in Russia, too, and we all know how intimidating winters are there.

According to BIO-architects, the firm who designed this quaint piece, it took them only one look at the area to decide on a house that spans the river. They prefabricated the Bridge House nearby and delivered it to the site for assembly.

It features mostly wooden, with its main structure heavily reliant on the material. But it’s also got plenty of glazing. As the name suggests, it doubles as a bridge, which means it provides access to either sides of the riverbank. Yes, the owners can actually enter one side and emerge on the other, thereby crossing the river. Pretty neat idea.

Inside, there’s 150 square meters of space, but that’s mostly taken up by a spacious kitchen and dining area. There’s also a minimalistic but still lavish living room set-up with chic seating. And a piano, to boot, probably for entertainment purposes.

Elsewhere you’ll find a loft bedroom above the kitchen entered via a ladder. There are also a couple more bedrooms on the ground floor, one of which boasts its own tiny kitchen. There are two bathrooms, plus a partially covered deck outside.

The whole house features generous helpings of insulation, so much so that you won’t need any heating even when it’s as low as -15 degrees Celsius outside. 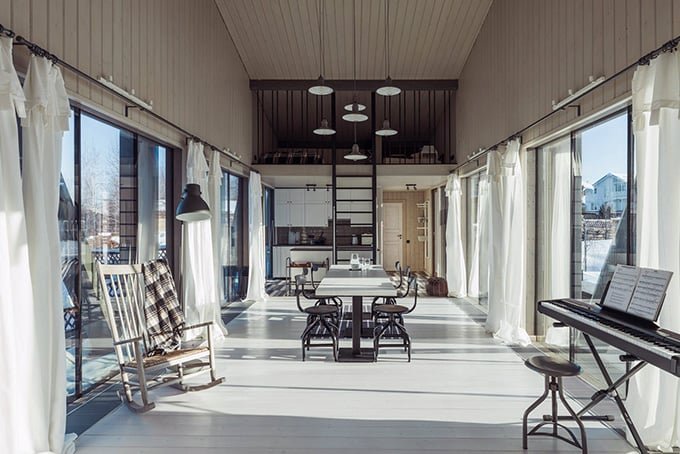 Parasol House: A $3.2 Million Residence In Palm Springs You Can Own Now

The Parasol House stands on a 3.74-acre lot with a structure that spans 2,600 square feet and comes with a waterfall feature.

The Red Cave occupies an area of roughly 3,875 square feet and spans three levels for guests to work out and relax at the end of the day.