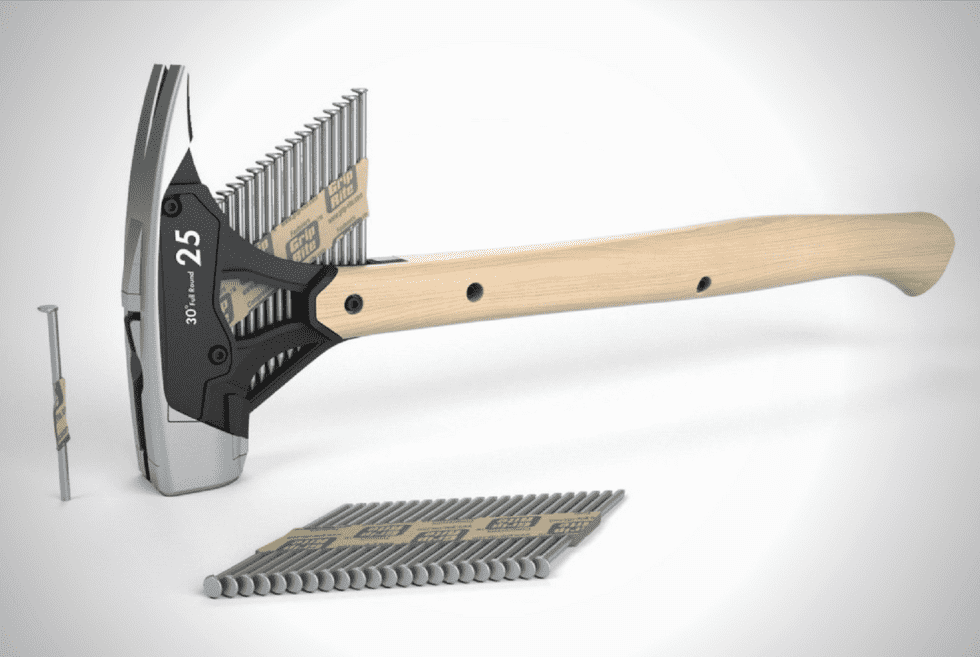 For a long time, the AutoAdvance Hammer has been Michael David Young’s “mad scientist project,” having worked on it for six years. After many failed prototypes, Young, a freelance automotive designer, ultimately produced a functional unit and tried shopping it around to major tool companies.

The AutoAdvance Hammer is an economical take on the nail gun, but it’s probably more fitting to call it a serviceable alternative to the tool. Design-wise, it’s less bulky and rugged-looking than your everyday nail gun, and much more portable, too. But what truly sets it apart is the fact that it doesn’t require electricity to work.

Users simply have to preload a nail strip, tap once to load, hammer once to set the nail, then continue driving the nail in. There’s a safety switch built-in to prevent injury, and loading sets seems to be pretty simple. Of note is the nail-advancement mechanism that prepares the next nail in line when the user is ready — a total time-saver.

It won’t completely replace the nail gun, however. Instead, it’s meant to be an upgrade over the traditional hammer and could be useful if you just need to drive a few nails when a nail gun is inaccessible. Also, it’ll probably prevent a lot of people from accidentally pounding their thumbs during construction or other DIY projects.

As he details in his Coroflot page, Young’s initial attempts to sell the AutoAdvance hammer failed. Finnish consumer goods company Fiskars had shown interest and called it the best idea they’d ever seen, but eventually decided it was too complex for their lineup. He got close to selling the idea to Craftsman but their deal fell through when Sears acquired the company. On a positive note, Young says the product seems to be gaining traction in Russia, so we’ll see how that turns out.