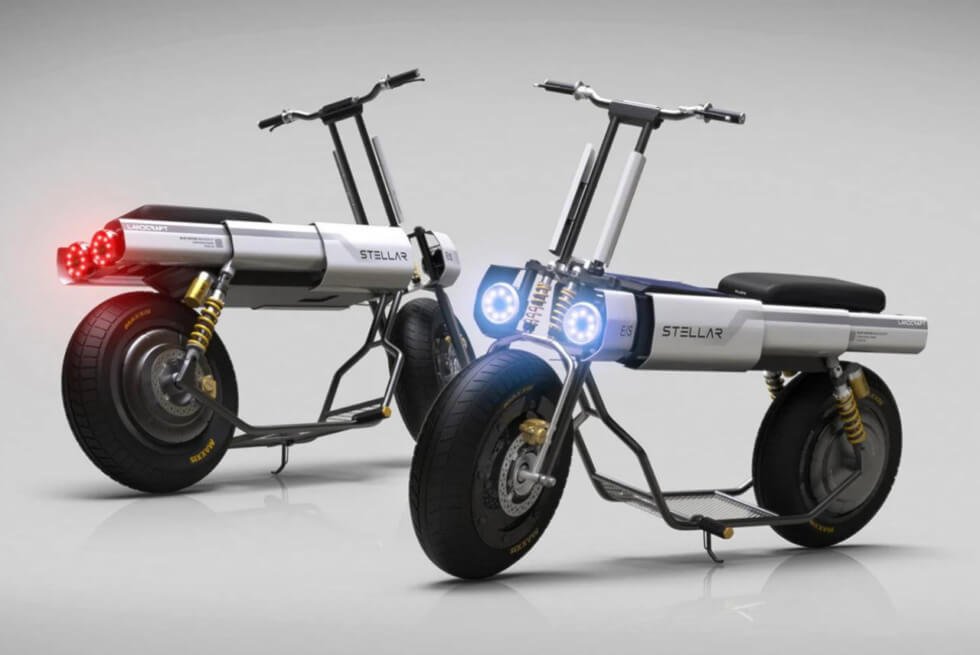 The way environmental activists see it, the shift to all-electric powertrains is the only way we could reverse climate change. As experts point out, we are already at the tipping point, but the damage is still reversible. In the industry’s quest for sustainability, we could see more electric scooters like the Stellar as solutions to green urban mobility.

These days, even leading carmakers and motorcycle manufacturers are gearing up for an emission-free future. We’ve seen a lot of unique and exciting production/concept e-scooters before, but this two-wheeler lives up to the name. Many liken its look to that of a spacecraft, but it is a land-based platform instead.

Designer Fajar Ismail states that the inspiration behind the Stellar is the Quest Atom Alpha. If you put the two side by side, it’s clear which elements are taken from the latter. However, the former features fairings, twin headlights, shocks, a perforated panel underneath the frame, and more.

Just in front of the seat is a solar panel, which will keep the 240 Wh battery pack recharged in sunny weather. The front holds a double-spring fork, while the rear wheel sports Öhlins shocks. The Stellar’s robust suspension system should keep rides smooth even on slightly more challenging terrain.

There are a pair of HELLA LED headlights and two red LED taillights that mirror its placement at the rear. A digital instrument panel on the handlebars will display the e-scooter’s speed, battery level, and status. The empty space below lets owners haul cargo and still maintain optimal handling. Its two wheels are wrapped in Maxxis tires. Since the Stellar is just a concept we don’t have that many details about its performance yet. BRX is already testing the T1 version, while Prodrive Hunter T1+ is under construction with a delivery date sometime this September 2021.