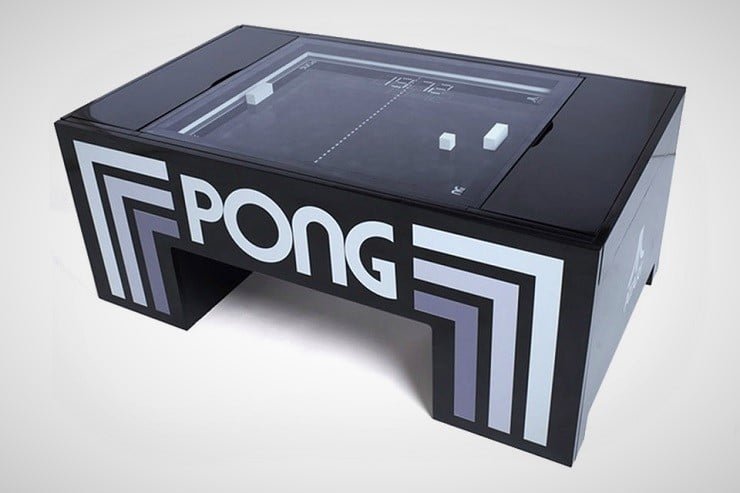 Forty-five years ago, the fledgling company Atari released their first video game – PONG, which was based on tennis and helped create the burgeoning video game industry. Now a group of inventors from Uruguay have taken that old 2D game and developed it into a three dimensional playing experience that is housed in a multi-functional coffee table.

The Atari PONG Table ($1,000) uses electric motors and magnetic fields to manipulate the pixel shaped ‘ball’ and the rectangular ‘paddles’ under a clear top. Instead of a joystick, the PONG table has dials that direct the paddles. For a modern enhancement, there are also buttons that can ‘curve’ the ball or affect the other player’s controls and flowing border lighting to make the game even more challenging.

But the PONG table is more than just a piece of furniture with a game inside. The cabinet includes speakers for game sounds as well as Bluetooth streaming. There are four USB charging ports available to help keep all your devices up and running, and the table also sports a digital clock on the playing surface. Available in four color choices, and if you miss the scramble for coins to play, you can even commission a coin-operated version for old-time’s sake!

The FUTO Collection is curvy, organic in form, and based on human-centric principles so seating on them feels like getting a hug and a sense of psychological safety.