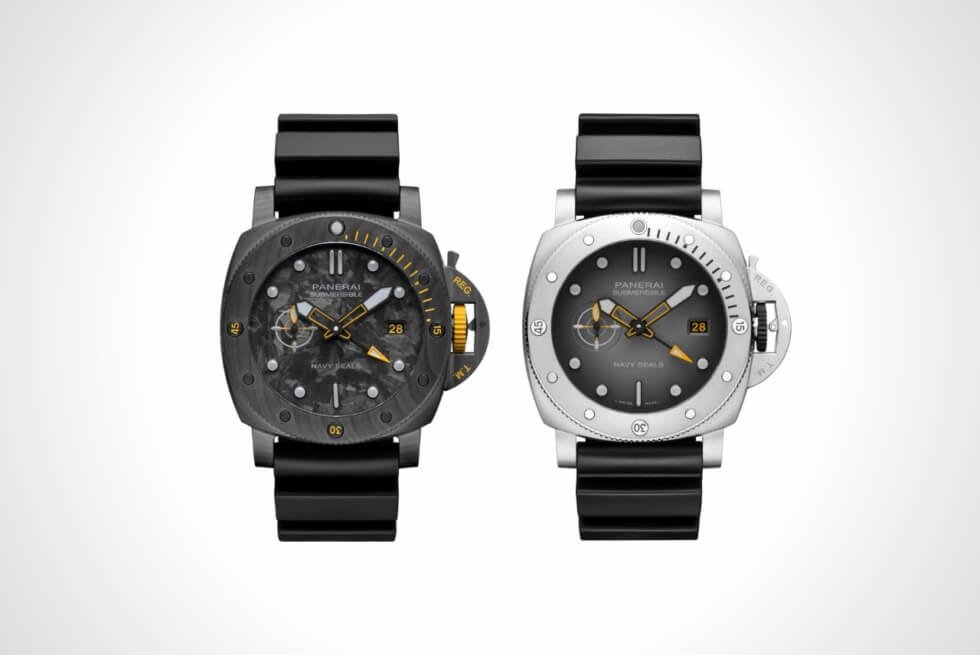 Panerai gave fans of military-inspired timekeepers a treat in 2022 when it launched the Submersible Forze Speciali. Both versions of the model were a tribute to the Italian special forces. The reception must have been outstanding at the time as the watchmaker revisits the theme once more in 2023. We have another two variants for the Submersible GMT Navy SEALs.

As it says in the name, the Italian group has partnered with the United States Navy’s special operations force. There are two designs available, and each is a limited-edition release. As for design and functions, the two are the same except for the materials in their respective construction.

Panerai offers the Submersible GMT Navy SEALs in 316L steel and Carbotech. Both cases measure 44 mm, but the latter is the more striking option. Next up is the titanium case back which sports an engraving of the United States Navy SEALs emblem. To the right is a yellow crown with Panerai’s iconic lock to give it up to 984 feet of water resistance.

Meanwhile, its bezel is also Carbotech but with a slightly more uniform pattern and yellow dive scale for contrast. As for the dial, it is forged carbon fiber which endows it with an intricate pattern akin to that of camouflage. It uses a mix of round and stick hour markers, while a date window occupies 3 o’clock and a small seconds for 9 o’clock.

Luminous coating is on the indices, hands, and 12 o’clock dot on the bezel for low-light visibility. The Submersible GMT Navy SEALs runs on an in-house 23-jewel, 171-component automatic P.900 caliber with a 72-hour power reserve. The 316L steel version is limited to 500 examples, while the carbotech is limited to 162 units only. Grab Your Victorinox I.N.O.X Professional Diver Titanium Limited Edition Before It Sells Out

The I.N.O.X Professional Diver Titanium Limited Edition ships with a Swiss Army knife with scales in a matching colorway as the dial.

This Victorinox I.N.O.X Titanium Looks Classy And Rugged With Its Red Paracord Strap

Beneath the sapphire crystal of the Victorinox I.N.O.X Titanium is a gray dial with a date window between 4 o’clock and 5 o’clock.