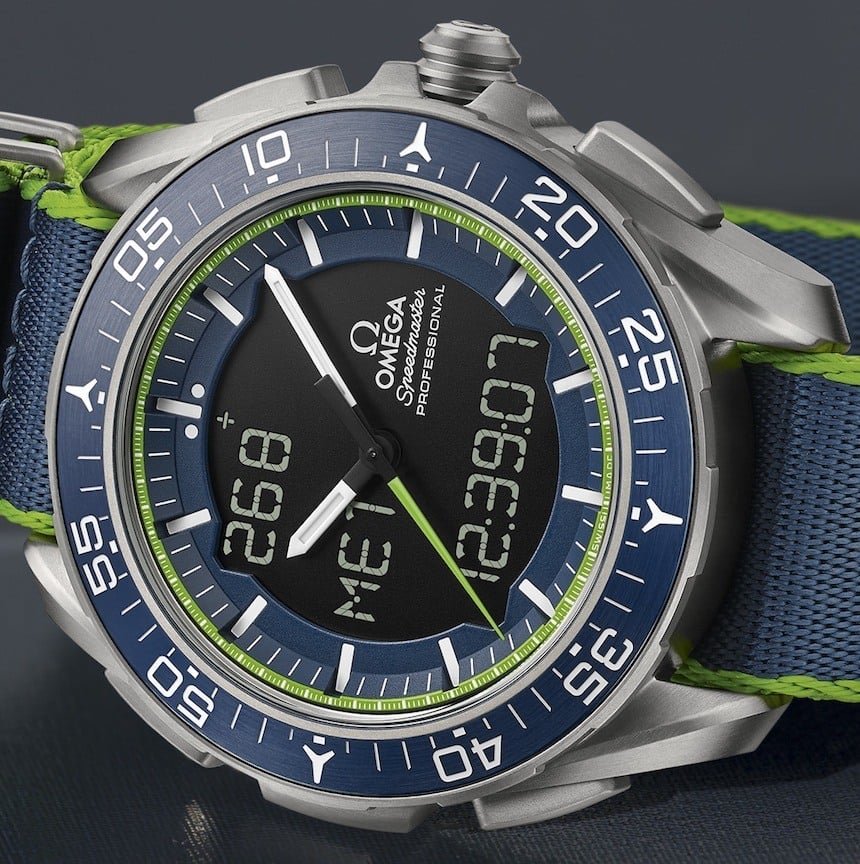 Inspired by a remarkable project called Solar Impulse, this limited edition timepiece is a more colorful version of last year’s Omega X-33 watch. Solar Impulse is the name of an entirely solar-energy-based airplane which will soon (in March) take off from Abu Dhabi to fly around the globe. Powered only by the sun, the plane will need five months to complete its mission, which will be the world’s first solar-powered circumnavigation of Earth.

The first ever round-the-world flight happened in 1924, and Omega decided to limit the production of this new wristwatch to exactly this number. The 45 millimeter case is crafted from grade 2 titanium and has a beautiful blue ceramic bezel. Blue and bright green rings go around the dial, evoking the fascinating image of our planet as seen from outer space. The Nato strap continues on the same color scheme.

Powering the Speedmaster Skywalker X-33 Solar Impulse is the in-house caliber 5619 multi-functional quartz chronograph movement that features a thermo-compensated integrated circuit. Even though you get analog hands with this model, there is also a grey-on-black liquid crystal display you can check for the time, alarms, countdown and chronometer functions, date, and mission timers.

The back of the watch bears the name of the watch, the number of each individual example, and the words “Tested and Qualified by ESA” (European Space Agency). It is also stamped with the green project’s “Around the World” patch. Each unit will be priced at 4,900 Swiss Francs, which is approximately $5,200.

Freenote Cloth's Midway Wool CPO offers style and warmth in a soft fabric made from a combination of wool, polyester, nylon, and acrylic.

Baltic says the first 200 examples of the Tricompax chronograph will ship with an engraving of its number in the series.