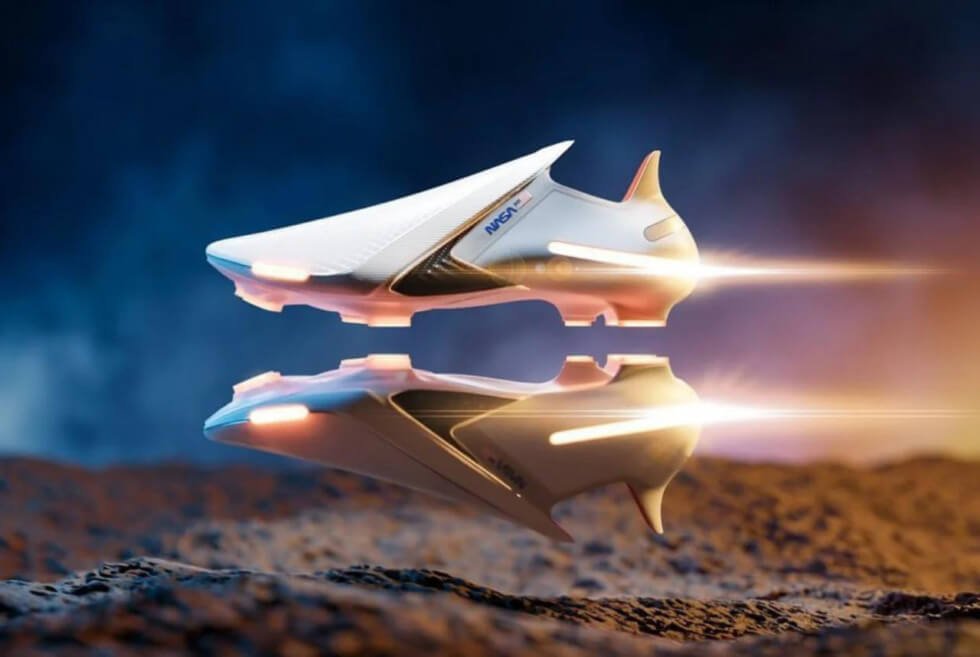 Share Tweet
Playing a game of football in space may still be pretty far into the future. But with the advent of space exploration, it’s not too early to design footwear that’s specifically for that purpose. Take for instance this pair of NASA-inspired football shoes from designer Hussain Almossawi.

When it comes to space, the first thing to consider is gravity. After all, you can’t be kicking and cartwheeling at the same time. As such, the idea is to use materials that are from space. Called “material innovations,” the construction is meant to defy gravity. The studs light up to activate gravity resistance sensors and enhance ball shot accuracies.

This NASA-inspired football shoe features a “Zero Gravity” label to assure the wearer that he can basically walk, kick, and run in space. It even has a space-inspired sheen to its basic colors of red, blue, white, and silver. It boasts a sleek silhouette with a futuristic design.

Almossawi begs the question, “‘What If?’ NASA started creating football boots?” with his football shoe concept. Speaking about his design, he calls it “a fun future driven concept” that blurs the “lines between the digital and physical worlds.” He describes the aesthetics as “futuristic and minimal, with material innovations from outer space, that has everything built-in and ready to make you defy the rules of gravity in space.”

This NASA-inspired football shoe may just be a concept for now but it’s interesting nonetheless to think of its possibility. Now the only thing left is to find a habitable planet in outer space and design gravity-defying balls as well. The Monaco Special Edition comes with a black alligator leather strap for an elegant ensemble for your wrist.

Look Cool This Summer With A Heather Henley From Faherty Brand

Faherty Brand's short-sleeved Heather Henley is a warm-weather essential with its breathable cotton fabric made from yarn that's spun using a special technique for long-lasting softness.

The Teva Hurricane Verge Sandals Is For All-Terrain Wear