The creators of these hybrid earbuds bucked nearly every trend in true wireless audio to bring us these insane new earbuds. And those risks are paying off.

Mobi is unlike any other earbuds. They feature new Hybrid ANC tech that that plunges you into full-frequency sound-proof bliss. Then, the AI takes over to analyze your music and calibrate your experience in real-time.

It’s like having your own Cortana (not the Microsoft digital assistant—the real Cortana) to make your music and calls clearer.

It also features massive 12mm speakers — more than 2x the size of drivers in other earbuds — to deliver body-enveloping sound. It came at the cost of making these buds a little chunkier than normal, but the designers banked on headphone fans caring more about sound quality than looks.

Meanwhile, the craziest thing about Mobi is the price. If you pre-order these earbuds on Kickstarter, you can get a pair for just $75. That’s 70% less than a pair of AirPods Pro, and Mobi has bigger speakers, better ANC, a longer battery, and a higher IP rating (IPX6).

Mobi might look like normal earbuds, but inside, they’re mad science all the way. We’ll explain why below. 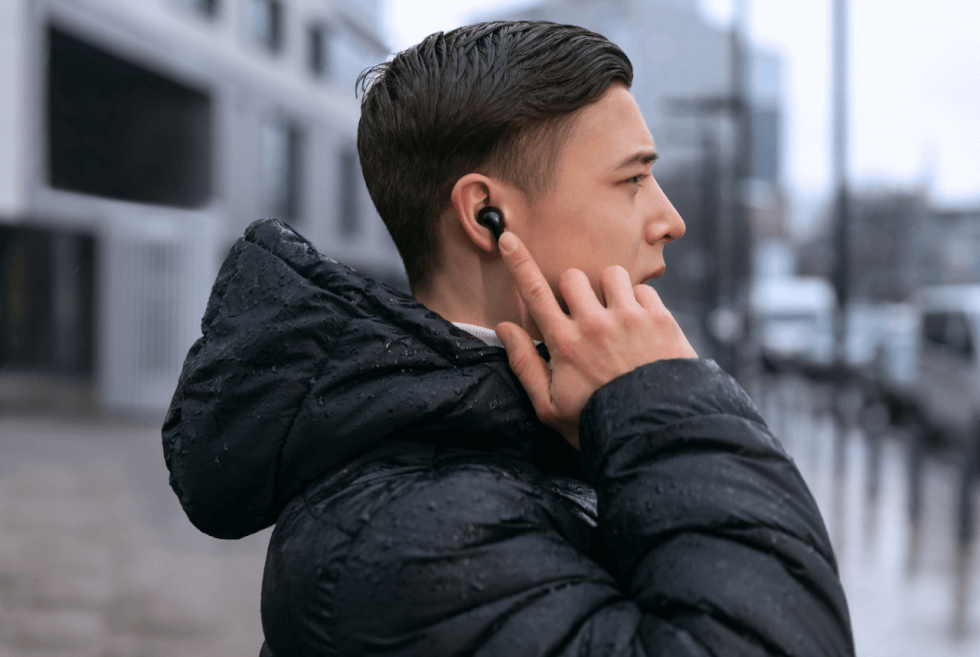 Standard hybrid ANC is pretty straightforward. Mobi is anything but.

First, let’s review what hybrid ANC is all about.

Normal hybrid ANC combines both types of ANC (feedforward and feedback) by including two mics on each earbud.

One feedforward mic captures ambient noises and cancels them. A feedback mic reacts to the ANC from within the earbud and cancels any noises from the perspective of the listener (aka you).

Until now, this was the most comprehensive form of ANC.

Mobi has taken it a step further by adding an additional feedforward mic on the exterior of each earbud. So, Mobi has an unprecedented 3 mics per earbud.

Does another mic even do anything? Actually, yes.

One feedforward mic is ok. But with two, Mobi can perceive depth and motion using its microphones. The ANC understands where a sound is coming from, and it can accurately detect sounds in a 360˚ field around you. This allows for the first full-frequency noise-canceling feature from true wireless earbuds.

And we haven’t even discussed the feedback mic yet. Mobi’s feedback mic works with AI assistance (more on that in a sec) to hear your music as you hear it and react to any imperfections or non-canceled sounds.

The ANC is so good at detecting noise that it can even detect the sound of the earbuds in the ear canal, and it can cancel the sound of the headphones shifting as well as noise caused by air pressure changes.

It really sounds like the world just turns off. You have to try it out.

If you have other premium headphones by Apple or Sony, it’s not the same. At 30 dB of ANC power, Mobi’s ANC is 50% more powerful than these top brands, so you’re getting an entirely new listening experience. 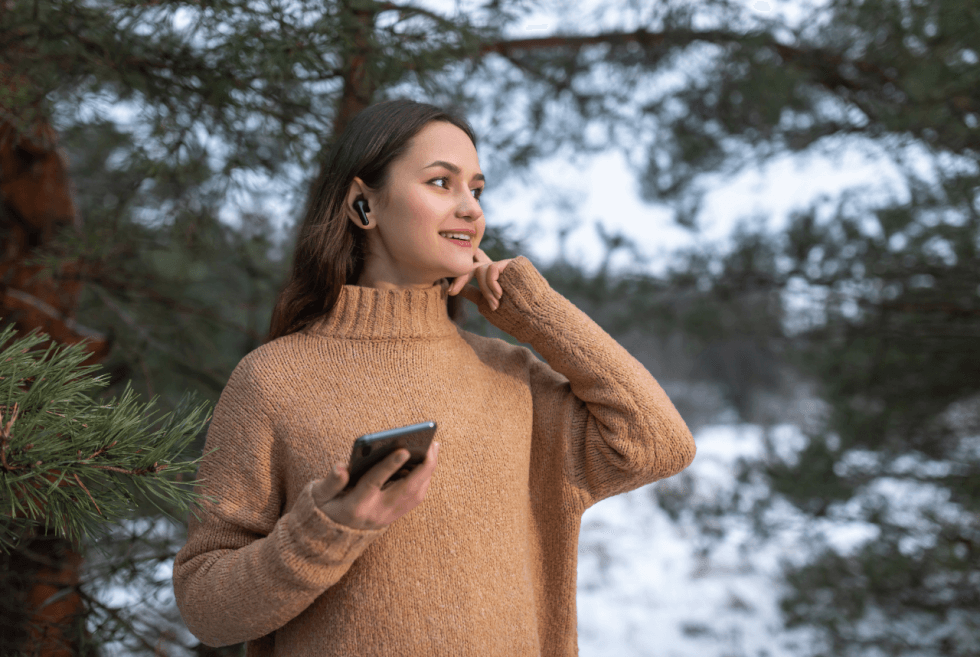 Ok, we know you want to hear more about the artificial intelligence. While Mobi isn’t quite on the same level as the Terminator, they’re pretty close.

As we mentioned above, Mobi’s AI listens to your music and calls in real-time. The algorithm recognizes 6000+ unique sounds, so it’s more effective at reacting to your music than other ANC feedback programs.

It knows exactly what’s supposed to be coming from the speakers and what isn’t, and it hears and adjusts every sound before it reaches your ears. This guarantees cleaner audio with no ANC glitches.

The AI also adjusts the ANC power for each neutralized sound. It doesn’t just put up a wall of ANC as other headphones do. It only uses the power it needs for each incoming sound. Think of it like an automated defense turret, but instead of shooting lasers, it shoots neutralizing waves at incoming sounds.

The AI uses the precise amount of power that it needs, so it actually conserves battery power compared to other headphones despite the fact that it uses more mics and more advanced tech. Transparency Mode is another ANC mode that you can toggle on and off. In this mode, the AI uses its sound database to allow certain sounds to pass through the ANC barrier to your ears. These sounds include sirens, alarms, voices speaking to you, your Alexa or Google Home, and other critical noises.

Transparency mode allows you to enjoy Mobi’s powerful ANC while remaining aware of your surroundings to a degree. This keeps you safer if you’re walking down a busy street, biking, or jogging. It also means you won’t have to remove your headphones or press pause when chatting with a neighbor or ordering a coffee.

Bigger Sound from (Too) Big Drivers 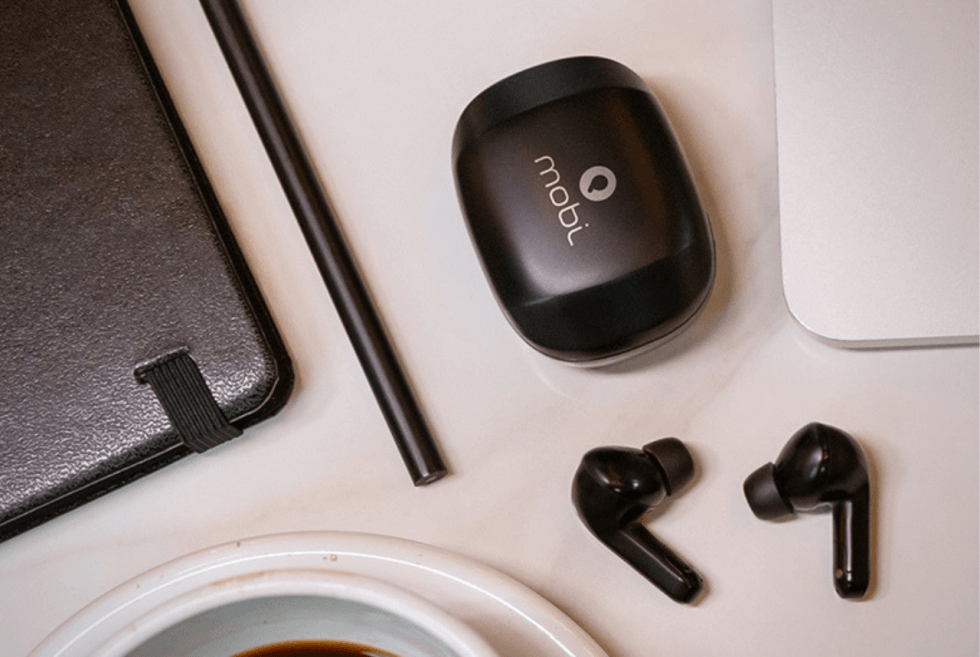 Are the speakers in the Mobi too big? Some might say yes. But not us.

Mobi was made for those who care more about sound quality than looks. Sure, they don’t look bad. But they’re definitely beefier than other earbuds.

This was the only way Mobi’s designers could fit massive 12mm drivers into each earbud. That means each earbud contains a speaker that’s about a half-inch in diameter.

Why does it matter?

Any audio nerd will tell you that driver size is directly related to sound quality. Bigger drivers are able to reverberate more air molecules, which delivers bigger, richer sound.

Most earbuds have drivers that are 4-8mm in diameter. Even when they’re close to your ears, this sound is still tinny and flat compared to over-ear headphones.

With Mobi, you can finally experience that body-hugging audio sensation that you get from studio headphones.

The best part? The bass, baby. True wireless bass usually sucks. Yet, Mobi’s bass beats thump all the way down to your gut and back—just as the bass was meant to do. 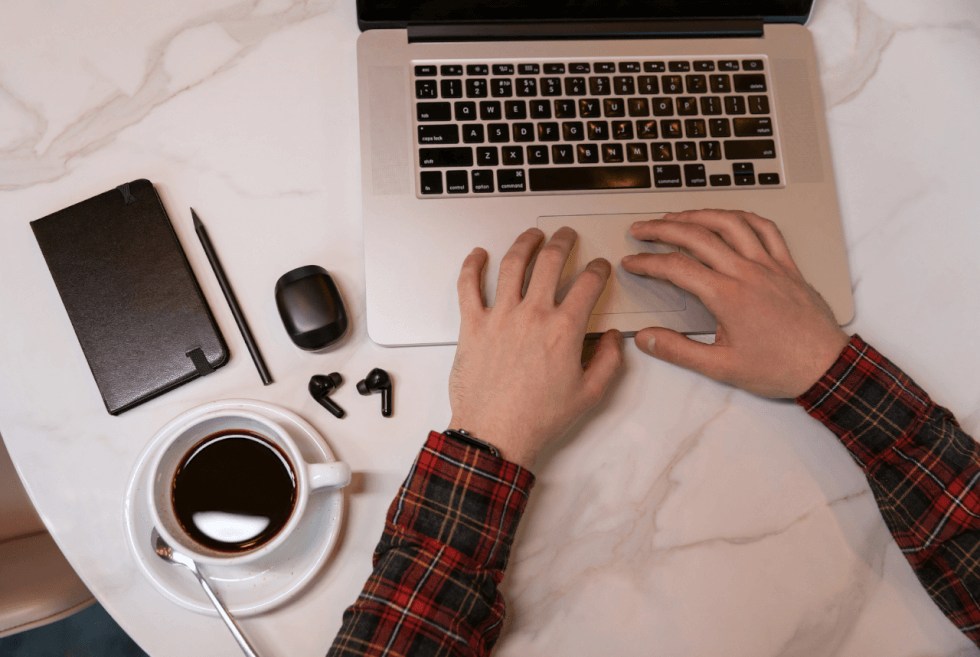 Mobi has one of the longest-lasting batteries in the industry. At 10 hours of playback per charge, they waste Apple and Sony. And, there are an additional 90 hours of playback in the carrying case, so you won’t have to hook anything up to a charger for months at a time.

Thanks to Mobi’s AI, you get more features and more battery. Mobi uses power more efficiently, so you can do more for longer. By comparison, you can only get about 4 hours of battery life from AirPods Pro with its ANC active. Mobi can do up to 9 hours with its much more advanced hybrid ANC active.

When it comes time to charge, the earbuds can gain 6 hours of playback with just a 15-minute rest in the carrying case. The case also charges quickly—100 hours of playback from just 2 hours plugged in (USB-C). Or, you can charge it wirelessly on a Qi pad. 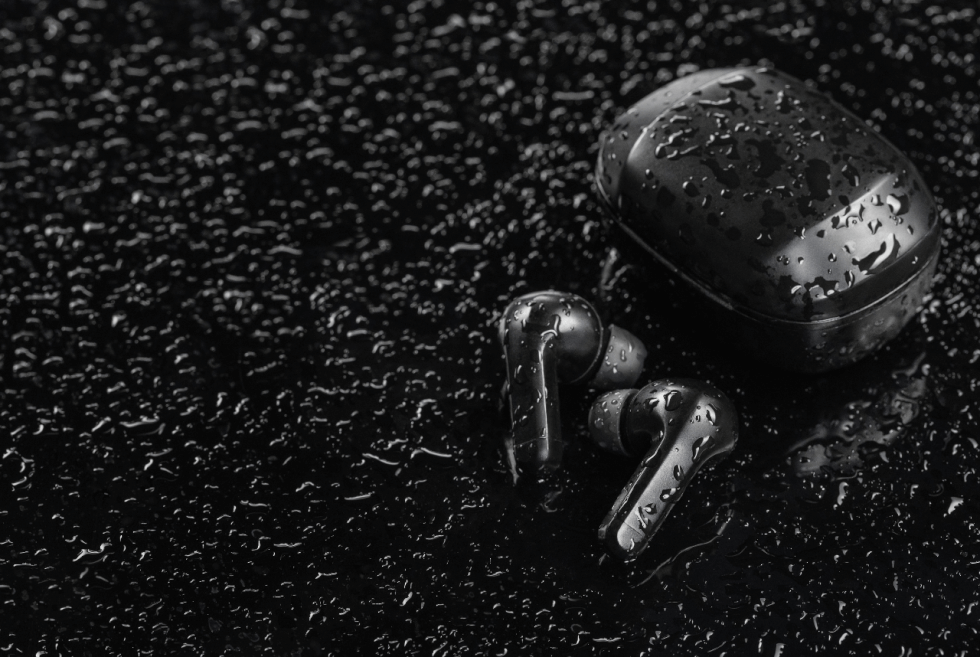 You can wake up, put Mobi in, and leave them in all day long. The battery can handle it. And so can the rest of the hardware.

No need to them out for rain, hail, snow, or the apocalypse. You can even wear them in the shower.

The Mobi has an IPX6 waterproof rating, which means you can put them through anything except full submergence. They’re also sealed and button-free, so no debris will get inside if you take them to the beach.

You’d Be Mad Not to Get Mobi 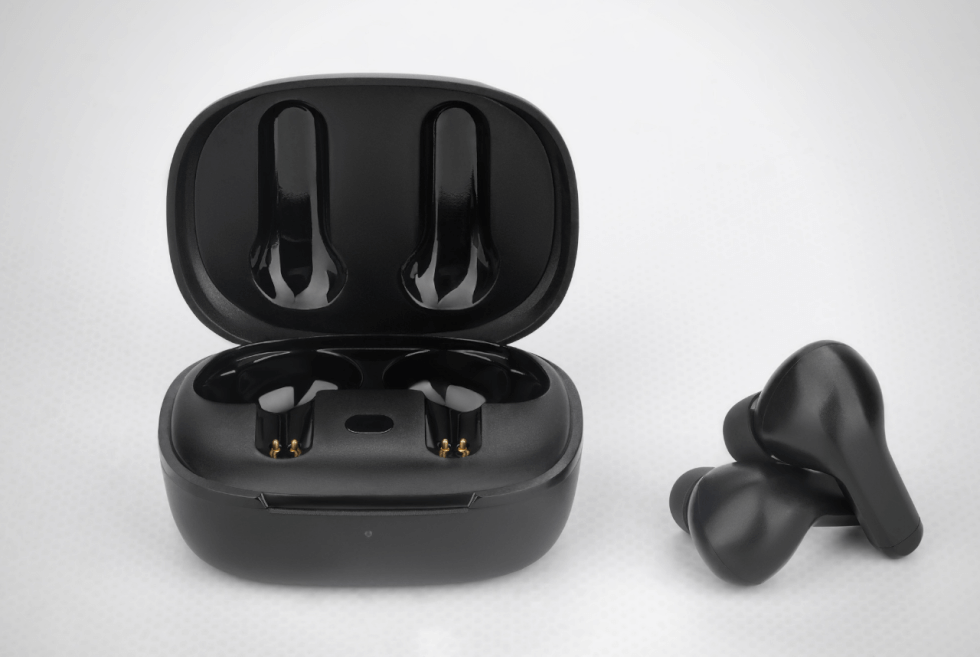 A little mad science made Mobi into the most affordable and advanced headphones on the market. But they won’t be affordable for long. They’re priced at an insane $75 a pair ONLY during the pre-order run on Kickstarter.

Do not wait to get yours, because early-bird perks are drying up fast. Claim yours here now!

Don’t worry, the earbuds are already fully funded, and there’s a money-back guarantee on every order. So, you’d be crazy not to toss a few bucks at them.

An offer like Mobi doesn’t come around very often—a premium pair of earbuds for a discount barrel price.

Show your support for this project and pre-order your Mobi buds now at mobiearbuds.com.

Cleo Robotics encloses the Dronut X1 in a composite and foam shell to protect its sensitive flight systems for versatile use anywhere.

Ultimately, what makes the Shelby Destroyer an awesome toy is the durable build quality and reliable performance backed by a 25-year warranty.