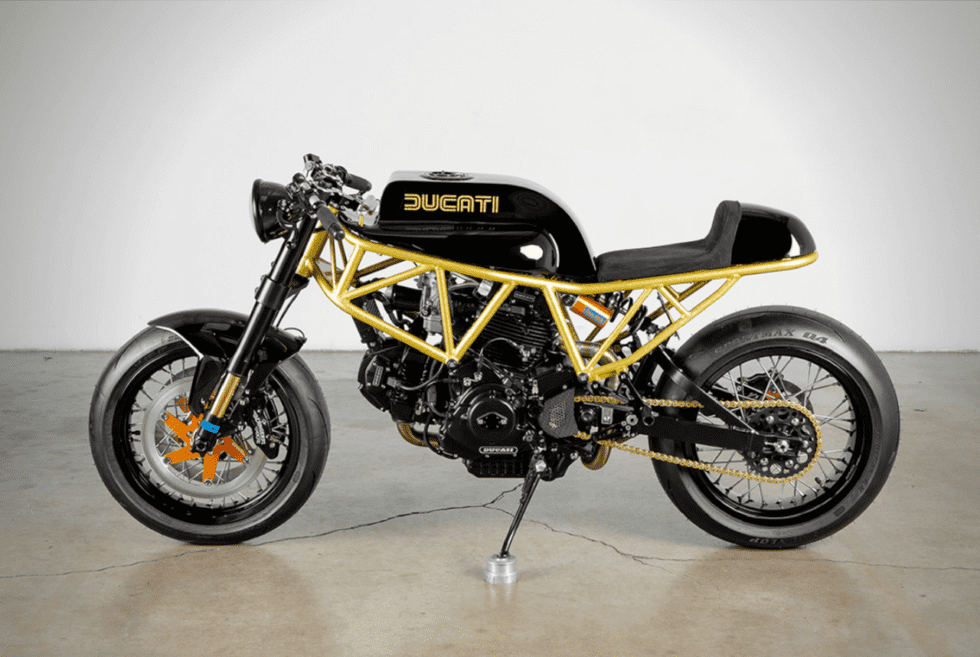 Jay LaRossa has been running Lossa Engineering since 2007. It’s a small Long Beach, California shop that makes custom café racers based on Japanese, Italian, and British bikes from the ‘60s and ‘70s. Though he’s been plenty busy with manufacturing hot rods and customizing trucks of late, he recently returned to form with this tuned Ducati 900SS.

LaRossa purchased the bike in 2009 for a “dirt-cheap” price but spent years figuring out how to customize it. Some tinkering fixed stuff the previous owner couldn’t, but the bike was toast. So he called up Scott Waters at Motoservizio to help him with splitting the cases, prepping the whole bike, then reassembling it.

Waters gave the cylinders new Nikasil coatings and put a pair of high compression pistons. He also ported and polished the heads, fitted oversized valves, and “degreed” the cam. It all came together with APE heavy-duty cylinder studs and an STM crankcase breather. Waters then upgraded the transmission, a known weak point of the Ducati 900SS.

Why stop there? LaRossa took it further, turning the 900SS into an ultimate performance beast. “I scored a 999 front end and bought a new Öhlins rear reservoir shock and steering damper.” He knew it should have a proper Öhlins setup, just like any Ducati.

It took LaRossa nearly a decade to finish this project. To be fair, he not only tried to settle the upgrades, he also battled cancer twice, and hit development roadblocks. He almost gave up on it, too. Thankfully, LaRossa heard an upcoming about a bike competition called The Golden Bolt show. He decided to finish the passion project, but he only had two months left. He did manage to finish the bike. Unfortunately, he didn’t win.

“But I met a bunch of good people. Miguel Galluzzi was the third judge, and I believe the only one who really got what this bike was about,” said LaRossa.

Porsche Commemorates Its 75th Birthday With The Vision 375 Design Study

So far, there are no hints of a production model of the Porsche Vision 375 in the pipeline, but it’s remarkable, nonetheless.