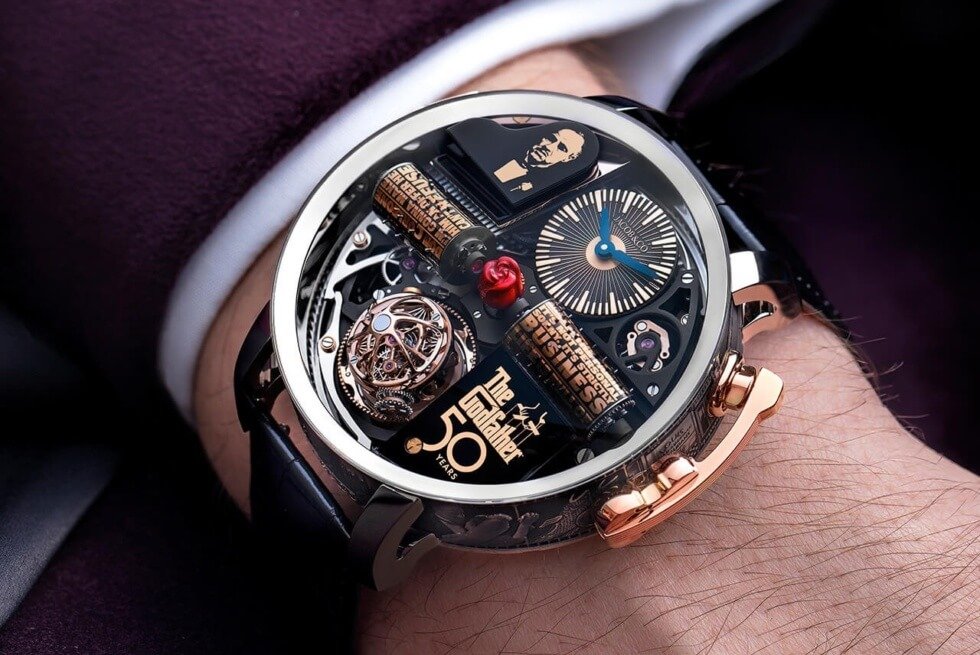 Fans of Francis Ford Coppola’s American crime trilogy mark its 50th anniversary this 2022. Earlier this year, a special collector’s edition re-release came out. Meanwhile, others may want to consider the Opera Godfather 50th Anniversary timepiece instead. As long as you have $500,000 to burn, this fancy timekeeping instrument is up for grabs from Jacob & Co.

It’s brimming with features and aesthetics that pay tribute to the cinematic masterpiece. Moreover, it’s one hell of an accessory to have on your wrist that is an instant conversation piece in any gathering. This stunning timekeeping instrument will instantly make you the envy of everyone else.

Jacob & Co. are crafting only 50 examples of the Opera Godfather 50th Anniversary. As with any of their exclusive releases, it won’t take long to sell out. There’s a lot to take in but let’s start with the 49 mm white gold case. The case middle flaunts various scenes from the movies in stunning detail.

The watchmaker is using a femtolaser to etch the images onto the precious metal. At 12 o’clock of the Opera Godfather 50th Anniversary is a sub-dial in 18K rose gold with piano key patterns that form the indices. Blue hands indicate the time. Meanwhile, at 6 o’clock is a triple-axis gravitational flying tourbillon.

Next are the music box barrels at 3 o’clock and 9 o’clock with engravings of legendary lines from the trilogy. A pusher at 10’clock activates the complication which plays the iconic theme music of the films. Everything frames a hand-painted figurine of a rose in the middle. After Nike announced the Canvas Dunk Mid in "Pale Ivory" earlier this month, a darker "Off Noir" colorway is likewise on its way.

Casa Nido: A Sustainable Luxury Home In An Exclusive Gated Community Is Up For Sale

Casa Nido promotes sustainability with its use of low-emissivity glass and solar cells to harvest energy from the sun.