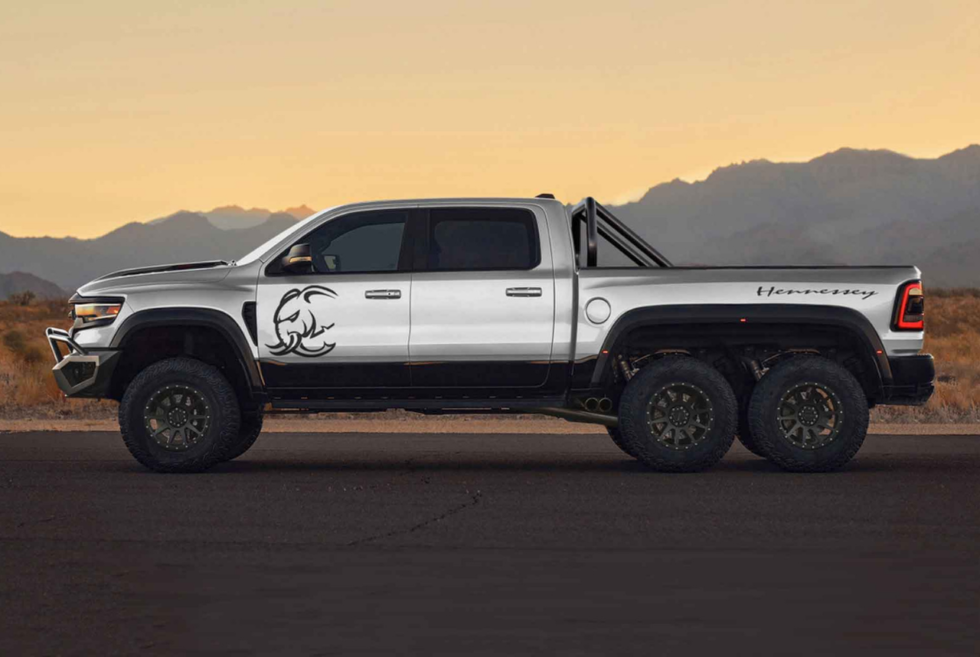 For a glimpse of some of the most jaw-dropping automotive builds, look no further because Hennessey Performance is where you want to go. We’ve seen their work on muscle cars, supercars, SUVs, and trucks among others. In the past, the shop already gave us several 6×6 behemoths that are nothing short of breathtaking. Now, it’s ready to impress yet again with another. This time, its naming the new project the Mammoth 6X6, which is fitting for the whats awaits lucky owners of this beast.

The donor vehicle is a 2021 Ram TRX, which, in its stock configuration is already one capable platform. It’s ships with a 6.2-liter HEMI V8 engine capable of 702 horsepower with 650 lb-ft of torque. Nevertheless, it does not seem enough for Hennessey Performance so out it goes. Instead, the team is slotting in a Mopar Hellephant power plant that will deliver a staggering 1,200 horsepower.

Of course, similar to its predecessor, the bed is getting an extension to accommodate the extra set of wheels. This 6-wheel drive behemoth should be able to handle all types of cargo without breaking a sweat. Aside from the aforementioned conversion, the Mammoth 6X6 is also kitted out with enhancements to match its menacing output.

Hennessey Performance is not stopping there. The front and rear bumpers of the Mammoth 6X6 get bespoke replacements. To help with low-light visibility. They’re also slapping on a set of LED lights that should match the overall aesthetics. Then there’s the off-road suspension to keep the everything smooth while driving, Finally, the interior will likewise get a bespoke treatment. Only three units will be available and each retails for $500,000.