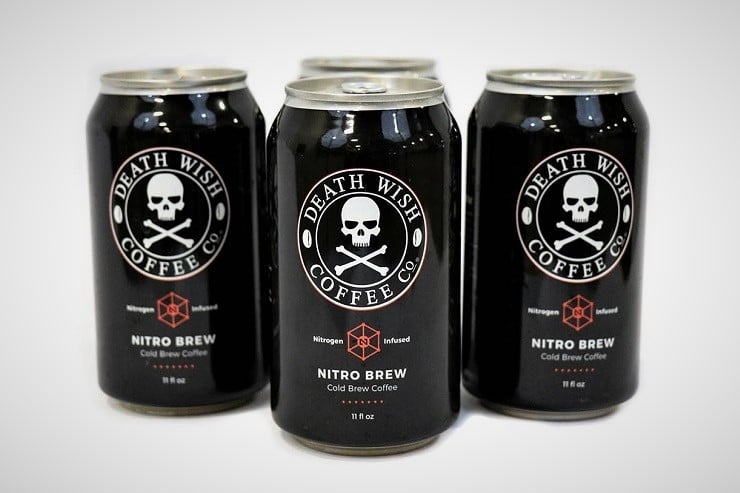 Death Wish Coffee Company has won the war against sleep by creating the most heavily caffeinated coffee in the world.  Using Arabica and Robusta beans from India and Peru they have found a roasting method that exudes the maximum caffeine from every bean.

Now they have given their signature coffee a new twist.  The Death Wish Nitro Brew Cold Coffee  ($15) has been infused with nitrogen to create a creamy tasting brew that features a frothy head. As with all Death Wish Coffee, this too is made with no preservatives and no cream or sugar.  Sold in 4-pack, 11 oz. cans, this potent cold brew must be refrigerated for best effect.

It does come with warnings about the extreme caffeine levels and the need to know your limits. Caffeineinformer lists Death Wish Nitro Brew as having 381 mg per ounce.  That works out to 3,844 mg. per 11 oz. can.  When you figure the average cup of coffee from McDonald’s averages 9 mg/oz and Starbuck’s at 20 mg/oz, you begin to see why drinking responsibly isn’t just for alcoholic beverages anymore!

The shot glasses and decanter in the Asprey Hexagonal Liqueur Set are expertly mouth-blown to perfection then handcrafted with a hexagonal finish.

The Johnnie Walker paper bottle is 100 percent recyclable, food-safe and its contents still taste as great as it does in a glass bottle.

The Bock Hog: Harpoon and WhistlePig collaborate once again for the holidays

The brewery is offering the Bock Hog Brew in 22 oz bottles in single or a 12-pack. You can also get it in a 13.2-gallon keg or a sixth barrel keg.

The Tesla Tequila container might not stand on its own, but it does come with a fancy metal stand so you can proudly show it off like a trophy at home.

Each of the $35,000 The Glenrothes 50 single malt scotch is also a ticket the gives the buyer the chances to meet and greet the distillers behind the brand.