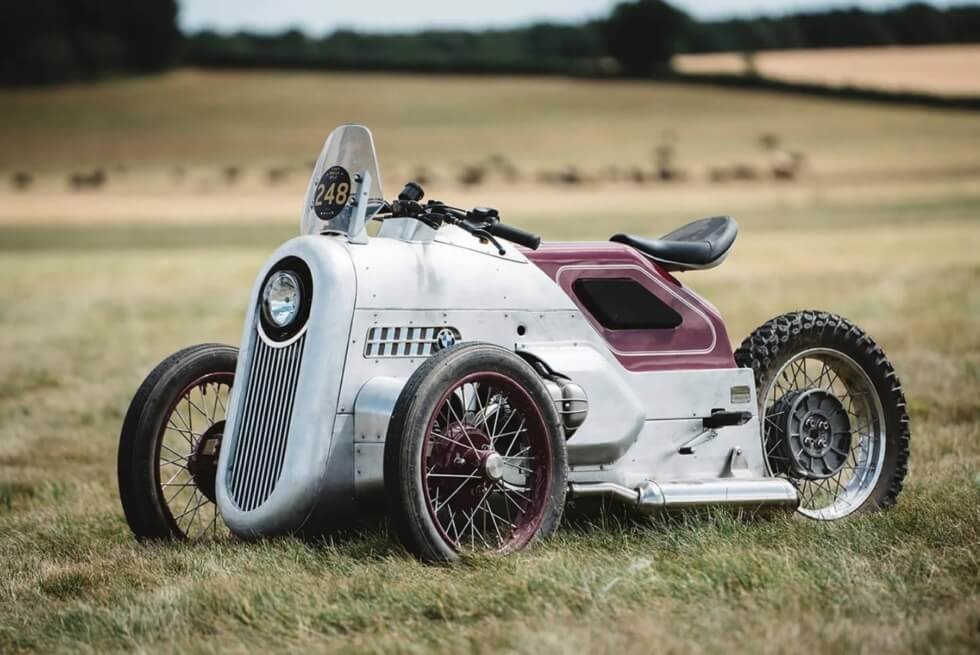 The majority of aftermarket motorcycle modifications we see generally tend to stick with the standard configuration of the donor model. However, there are a few out there that prefer to shy away from the norm. You can say Tim Cumpert is one of those artistic visionaries as he designs this bespoke three-wheel BMW moto called the Cumpert_002.

We’re getting a hint of sci-fi, cyberpunk, and aviation vibes with his custom take on a 1992 BMW R 100R Mystic. The vintage look of this one-off supposedly draws inspiration from pre-war racers. According to the man behind Cumpert Contraptions, this project has been in the making for quite some time.

Work started on the Cumpert_002 way back in 2012 and he considers it as a practice to eventually get good with aluminum sheet fabrication. To accommodate the reverse trike setup, the standard front end of the two-wheeler needed to go. In its place is a frame sourced from an ATV.

With a bit of old-school engineering and TIG welding work, the results are outstanding. According to sources, the suspension arms, shocks, disc brakes and steering linkage of the non-BMW donor machine are all intact. Meanwhile, the Cumpert_002’s rear retains the bike’s original wheel and braking system.

The shop also nudges the boxer engine forward via new anchoring points. The work on the Cumpert_002’s body is remarkable with sections hammered and English-wheeled to form. He keeps the metal bare, which looks drop-dead gorgeous, especially with the visible rivets.

The Cumpert_002 does flaunt a tinge of red toward the back. Rounding out the rest of the add-ons is a windscreen from a Kawasaki Versys, a Triumph Bobber saddle, a Honda brake lever, and Yamaha BT1100 mufflers. Documents show the most recent service was in June 2022, which means this 1974 Ferrari 365 GT4 BB is ready to drive and enjoy.

Chevrolet is giving the Blazer an all-electric treatment which positions it to compete with Ford's popular electric crossover.

The 43-foot beam means the Unique 71 has enough volumes to house up to 12 people in luxe accommodations along with a crew of 17.