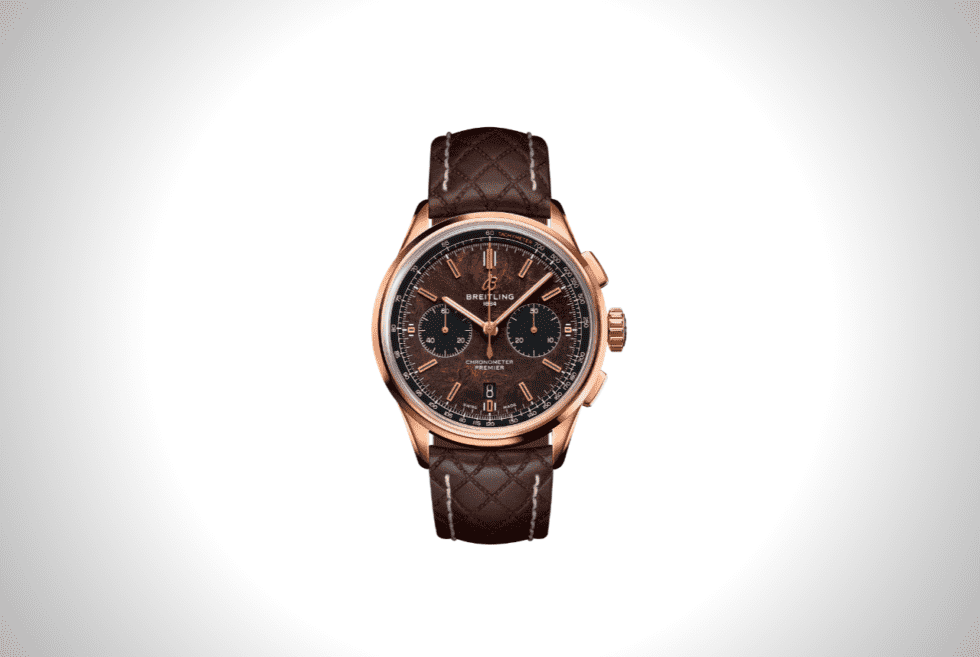 Here we have the Breitling Premier Bentley Centenary Limited Edition. A beautiful timepiece that celebrates a hundred years of automotive excellence. The story of its debut started a few days ago, at the 2019 Geneva Motor Show. Bugatti introduced the world’s most expensive supercar, the La Voiture Noire. It’s an ebony-clad one-off beauty that was surprisingly sold immediately. It was a special model to commemorate its 110th anniversary in the business.

Meanwhile, another carmaker also made a big impact at the expo. This European brand was also celebrating its 100th anniversary and it was doing it in elegant style. The 2019 Bentley Continental GT Number 9 Edition by Mulliner is one classy ride. It pays homage to the 1929 Blower Bentley with a wooden insert taken from the original car’s dashboard. On the other hand, the watchmaker is responding in kind, with a brown bur elm dial. Other details under its non-reflective sapphire lens include a chronograph counter and a tachymeter scale. Both of which are within black subdials.

The indices and hands sports coatings of Super-Luminova for low-light visibility. Its case measure 42 mm and features Bentley script on the side opposite the crown. Next, this limited edition timekeeper runs on a Breitling Manufacture Caliber 01 Automatic movement. Then, the bottom holds a transparent case back with the rotor and its complications on display. Furthermore, the Breitling Premier Bentley Centenary Limited Edition is available in 18K rose gold and stainless steel variations. Just as the name suggests, availability will be exclusive, with only 200 units for the rose gold and 1,000 units for the stainless steel.

With the Bentley 2021 Home Collection, there are several new additions to the company’s growing lineup to elevate your living spaces.

LÜM-TEC for is applying X1-grade Super-LumiNova with MDV technology on the Vortex D4 which can supposedly glow for over 24 hours.

Some sections of the Model Excellence 24K adorned with gold via electroplating while the Tesla badge has been replaced with Caviar's crown emblem.

Each of the $35,000 The Glenrothes 50 single malt scotch is also a ticket the gives the buyer the chances to meet and greet the distillers behind the brand.

The GR Super Sport will likely see a highly exclusive release in the near future that will resonate with the automotive industry and consumers.