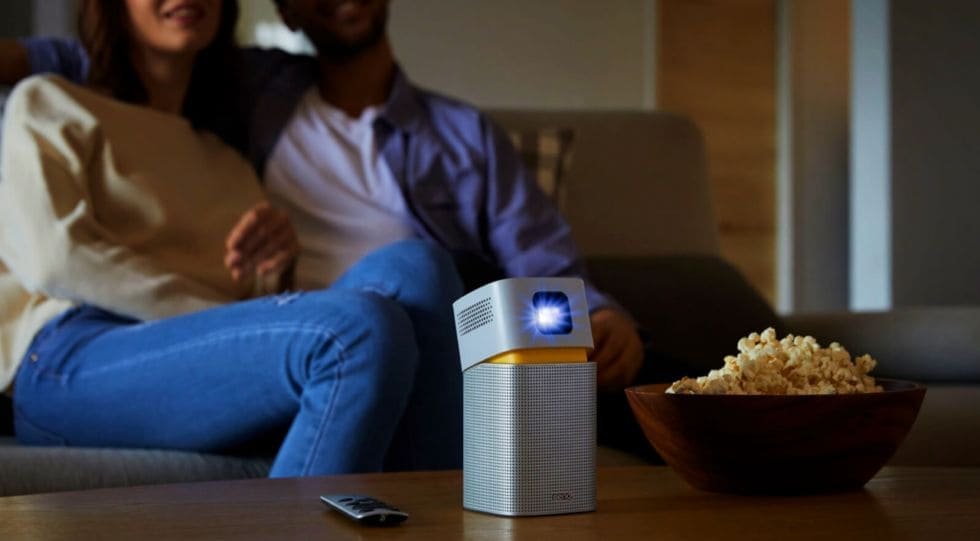 At Men’s Gear, we’re lucky enough to review a lot of impressive products. However, it amazes us when we get our hands on something truly special. That was how things felt when we got our hands on the BENQ GV1 Pocket Projector. It may seem like a weird concept, but don’t think this projector is meant for your pocket.

The concept behind the projector was for it to be smaller and more mobile than what you might see from other projectors. It clearly has done just that, offering a better concept than that of normal projectors. You won’t need any cords lying around, nor scramble for an outlet.

One handy extra feature is that it can capably run for much longer than this when you play just music on it. The device is capable of using up to 11 languages. This comes with some closed captioning for certain applications but will be in the complete language of your setting on the majority of the device.

The languages it uses are Arabic, English, French, German, Hindi, Japanese, Korean, Portuguese, Spanish, Simplified Chinese, and finally Traditional Chinese. It even comes with a handy carrying bag for when you plan to take it on trips.

The BENQ GV1 And Its Speaker 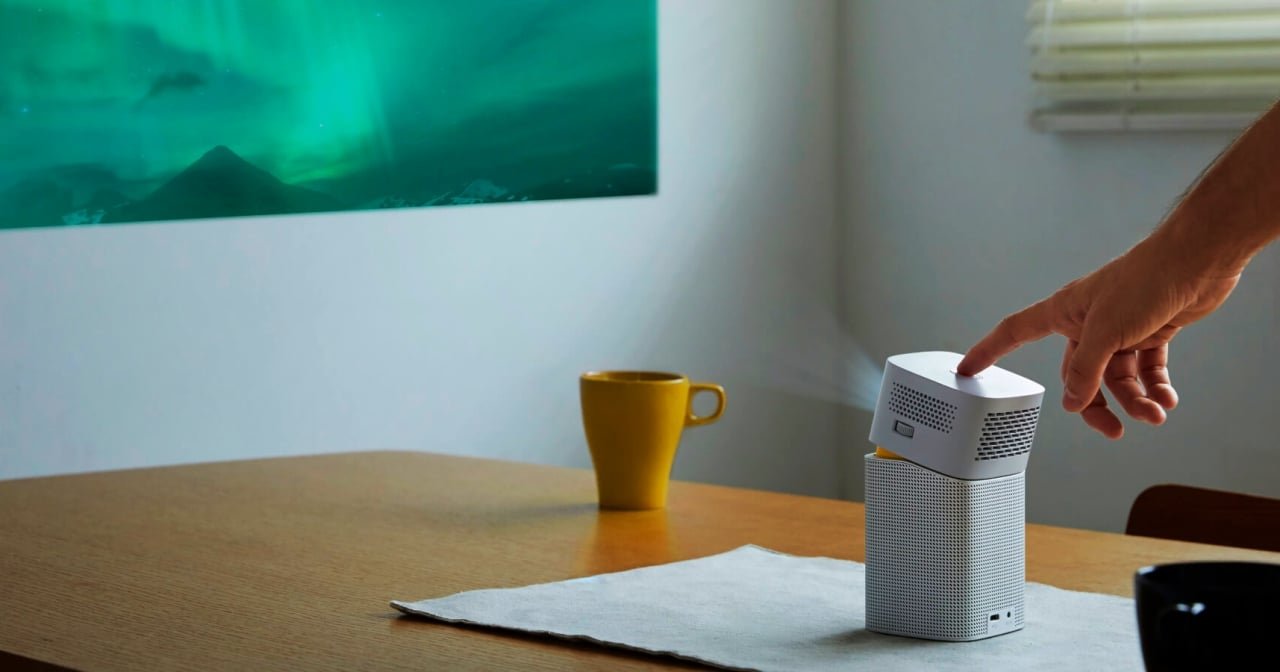 When we were evaluating the BENQ GV1, the first thing we wanted to know was how it worked opposed to normal projectors from the BENQ brand or anywhere else. The first is obvious, it is much smaller and more mobile. This allows us to take it anywhere we want.

The brightness it has allows us to have it show on any surface we want without much of a problem. However, you won’t be able to shine it on an area directly in the path of any bright light. It’ll be drowned out by the normal lighting, which is not uncommon among projectors.

Since the battery can last around 3 hours, this is enough for any normal film. Well, unless you’re trying to watch Gone with the Wind or The Titanic, both over 3 hours in runtime. Since the charge to get halfway is about 30 minutes, you can be up and going with a small intermission if you wish to see one of these films on it.

The speaker on the device encompasses the entire thing, meaning you can hear what you’re watching without any real struggle. A lot of projectors force you to get a surround sound or speaker system as an attachment. Meanwhile, with the BENQ GV1, you’re ultimately going to hear with ease.

This is due to it working on a 360 speaker that allows it to be heard all over any given room you’re in. Also, regardless of what you lay it on or where you place it, the speaker will work. It officially workers on a 5W Chamber x1 speaker system. 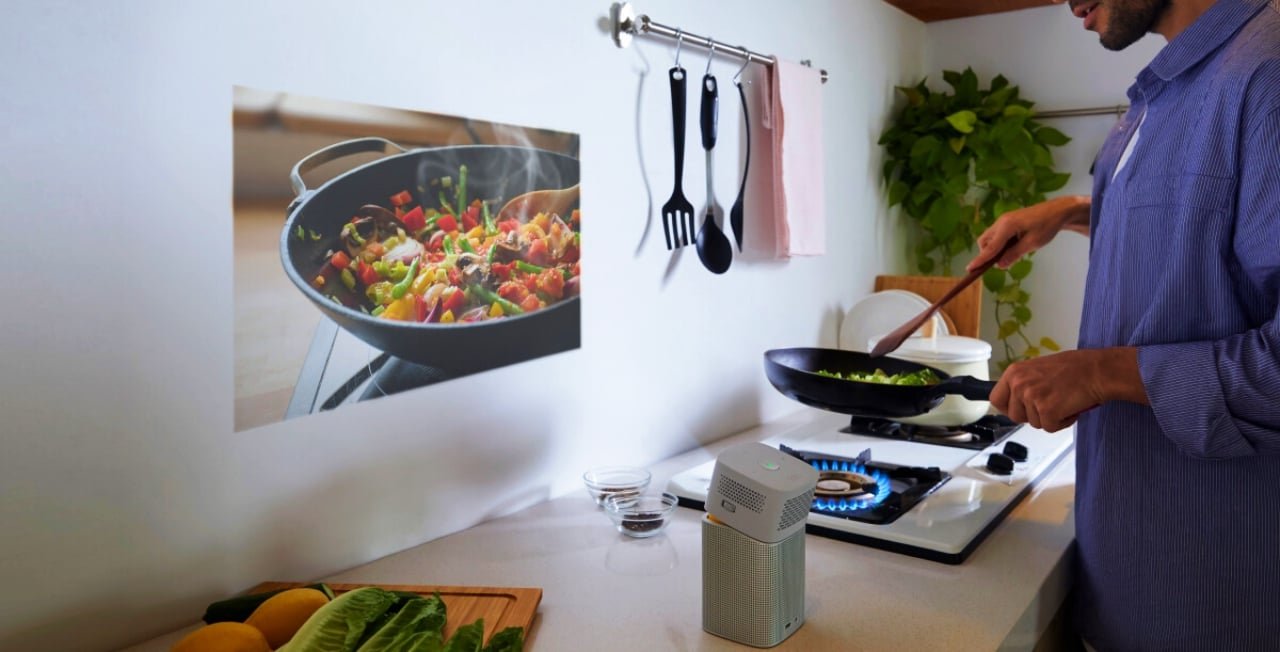 The best part about the device is its ability to connect to WiFi, anywhere you take it. This means you can download applications like YouTube, KODI, and much more. This makes it similar to that of a Smart TV, with all the apps one might use from one that you can merely gather up and add yourself.

Then you can access and play things from them with nothing more than a click of the remote.

To top it off, it is able to connect to any Bluetooth technology you need it to as well. That includes a Bluetooth speaker or even something like your phone, computer, etc. That gives you the ability to not have to worry about much at the end of the day. 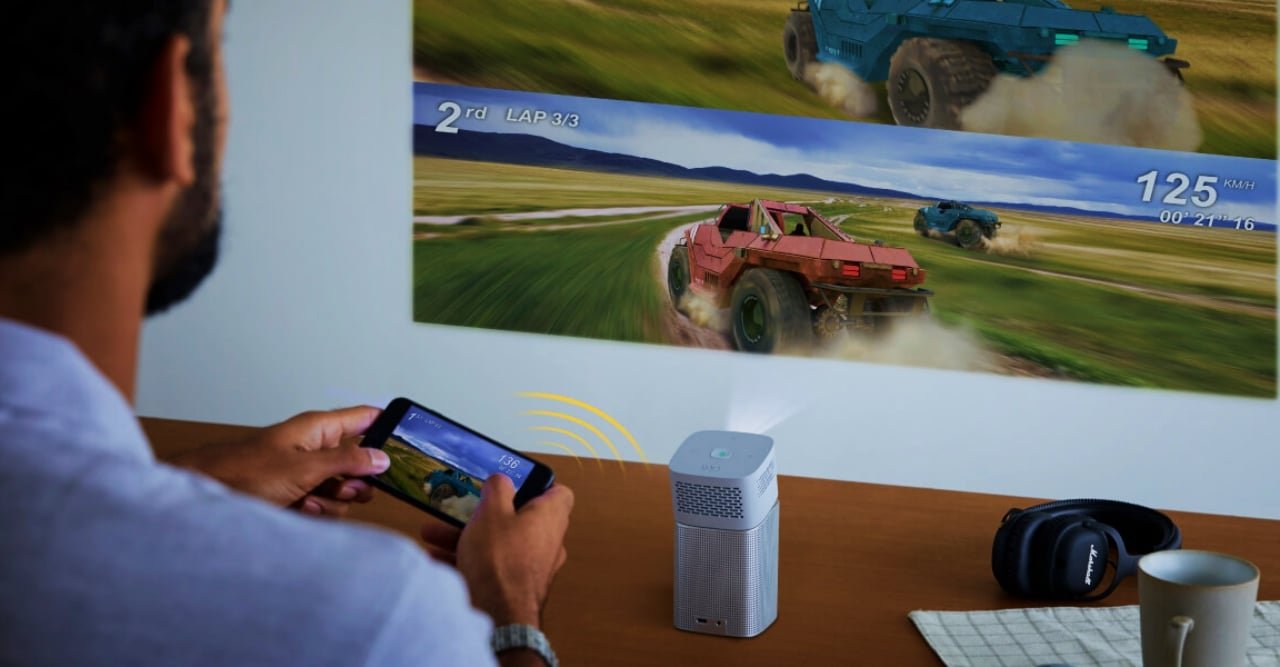 While we are certainly not going to say much bad about the device, the BENQ GV1 does have some issues that need to be considered. Since it is a pocket projector, this does mean you’re reliant on a battery system only. Not much of an issue really, but we have seen some pocket projectors with slightly more time on the battery.

The record thus far is up to 5 hours.

This goes to around 3, so it is not that problematic but worthy of note. It should also be mentioned that you need a darkened room for it to work at its fullest. We found that the lighter the room was, the harder it became to see the images.

The projector works on just 200 ANSI Lumens with its brightness, which is likely why it needs the darker rooms to work to its fullest ability.

The image runs on the older high definition model. This means it won’t come across in the kind of high definition you might be used to from other projectors or televisions. The official picture goes from VGA(640 x 480) to Full HD(1920 x 1080).

Officially, it works on nothing worse than 480p resolution. In this, you’re getting a good image. Yet it’s not as High Def as other projectors. The picture still looks very impressive, but you should not be expecting a 4K type of image out of the BENQ GV1.

When this is all we can find an issue with, we call that a really good device. It works beautifully, has no real issue with set-up, and offers a perfect display system. Plus, the other cool stuff we already mentioned above.

How To Buy The BENQ GV1 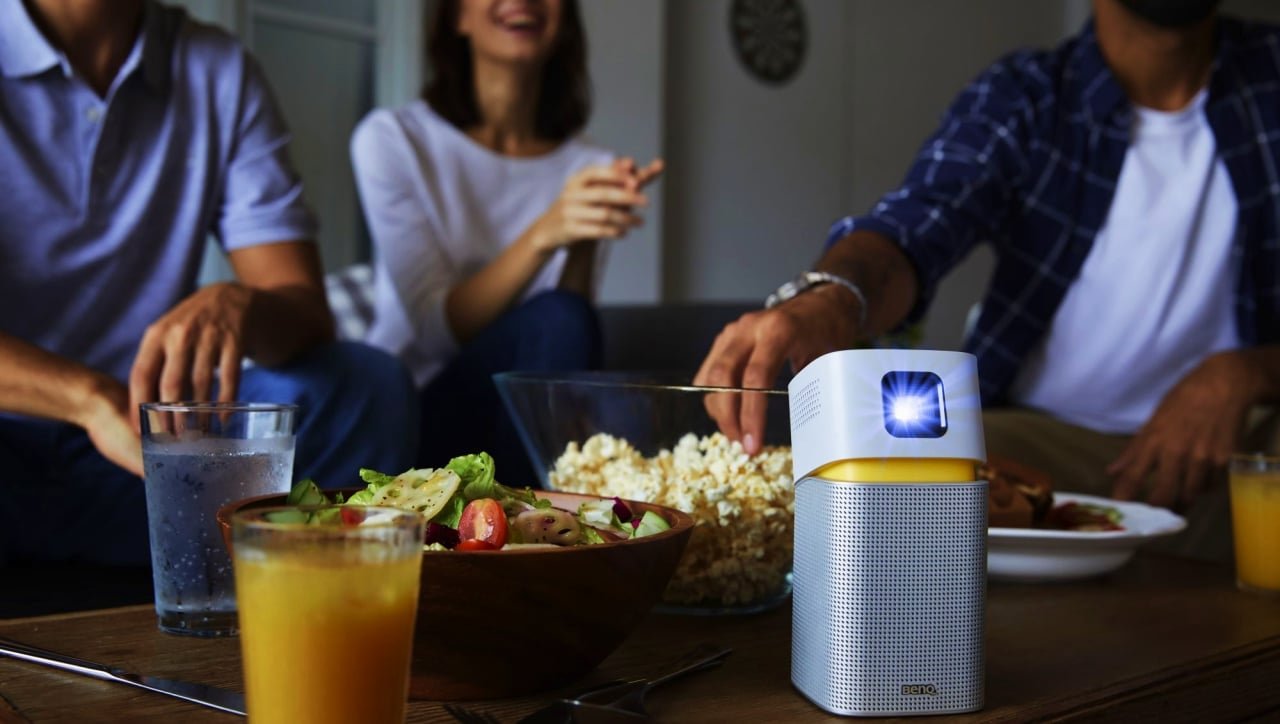 Likely one of the other cool features about the BENQ GV1 is that you can adjust where the images go by merely moving the head of the device up or down. You won’t need a setting to do this for you, even though it does offer proper keystone settings. Rather, you’re literally moving it up or down with your hand.

This pocket projector also lives up to its hype regarding its small stature. It only ways 1.6lbs, which makes it one of the lightest projectors in the world.

We also should not forget to mention it manages to do so much and yet this is only added to the impressive DLP Technology the projector uses. For those unaware, this tech allows for the overall picture of the device to be 10x better.

All of this only makes it easier to operate. It also just makes it more worthy of your attention. If you want to buy the BENQ GV1, simply click the link below. The link will take you to the BENQ website where it’ll show you a list of places you can buy the device from.

The price is not the same on them all, so we suggest looking at each until you find the price that best fits you.