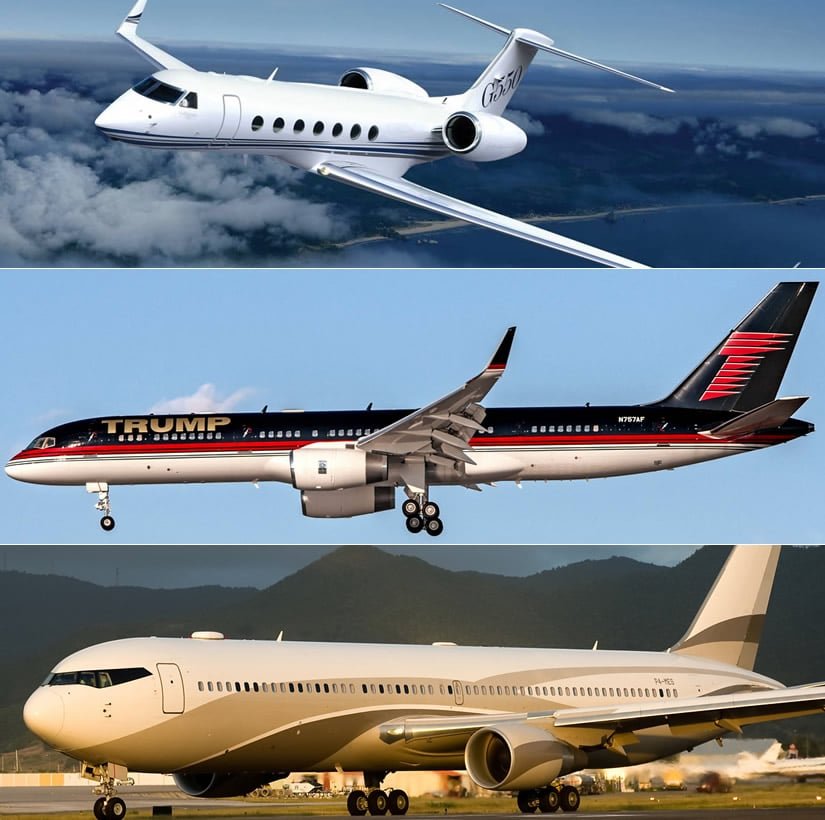 While flying first class is a very exciting experience, nothing really beats owning a personal jet. The freedom, comfort and privacy that comes with a personal airplane is priceless. Not literally so, though, because these flying luxury toys always come with a very exact and very steep price every time. That’s also the single most important reason why not everybody owns one, as much as we would all like to.

The next best thing to being the owner of one (or two, or three, or more) of the top most expensive private jets in the world is to rent one. Some wealthy people own more than one aircraft, but they obviously cannot travel in multiple planes at a time, so what they sometimes choose to do is offer them up for luxury jet charters. It’s a win-win situation for everybody involved.

So next time you contemplate flying to an exotic island with your friends, keep in mind that you also have the option to do so in complete privacy aboard a really cool personal aircraft! In the meantime, have a read about some of the world’s most exciting and opulent personal jets.

As the largest passenger plane in the world today, a regular Airbus A380 can transport as many as 853 passengers at a time. This customized version, however, was designed to accommodate only 100 people, every one of them being offered outstanding travel conditions. The project was awarded to the interior experts over at Edese Doret, who have vast experience in outfitting megayachts and luxury private jets.

Some of the features the owner asked for were somewhat decent, but then there were a few request that challenged both the imagination and the technologies of the time. The “magic carpet” room, for instance, reportedly offers breathtaking views of the ground through a transparent floor. We’re not sure if the actual plane really does feature such a room, but if it does, we imagine it must take a lot of guts to actually step inside it and onto the see-through floor.

One request that was not granted was to throw a swimming pool into the mix. The team did compensate with a plush whirlpool tub featuring a fast drainage system which can get all the water out in a matter of seconds.

Another outstanding feature that got approval from the experts is the elevator. This makes the jet the first airplane in the world to have one, offering super-private access to the select few passages who get to use it: it extends all the way down to the ground, offering fast and easy egress. Special quarters for a few Rolls-Royces and horses were also taken into consideration when planning the layout.

There are of course some more common luxury amenities inside the Flying Palace, including a series of comfy lounging areas, a 14-seat dining area for the owner and his closest friends, and a series of five-star grade private bedrooms complete with en-suite bathrooms, king beds and private relaxation/dining areas. A concert hall, a state-of-the-art meeting/presentation room, and even a modern-day throne in the sitting room complete the list. Unsurprisingly, this is the most expensive private jet in the world. 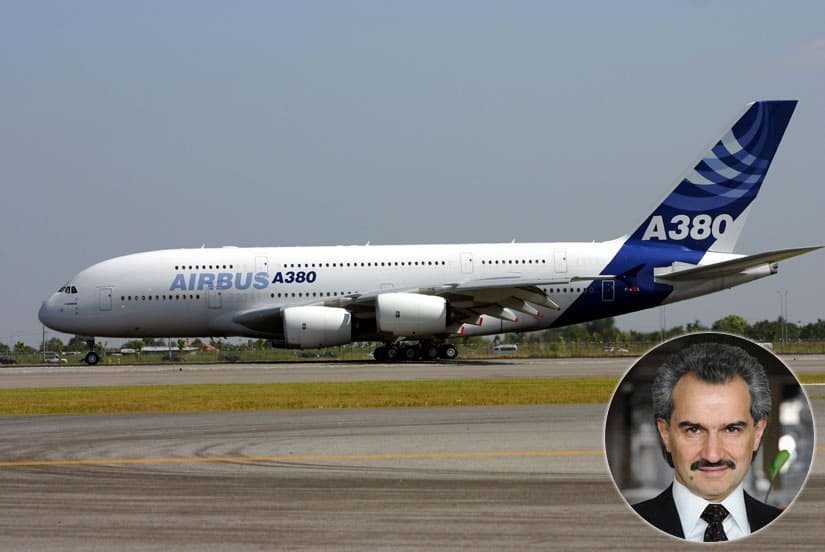 As soon as the Airbus A380 airliner appeared on the market in 2007, Saudi Arabian Prince Al-Waleed bin Talal decided to get one for himself and then give it a nice $150 million upgrade. The plane itself had a starting price of $300 million, but money did not seem to be an issue for the Arab royal.

Quite unexpectedly, though, he later decided to sell his opulent toy to an undisclosed billionaire, even before the plane was ready for its first ever flight. The name of the new owner has remained unknown.

Among the top most expensive private jets, this one gets extra points for opulence. No expenses were spared in upgrading this flying machine, and the final product ended up being $120 million pricier than the original version.

Improvements include such things as gold-plated furniture and even solid gold wash basins with Lalique crystal details. An elegant living room, a cozy bedroom and a remote-controlled desk unit are all there to ensure perfectly enjoyable flights across the globe.

The Sultan of Brunei

The billionaire royal famously owns between 6,000 and 7,000 cars, as well as what is believed to be the world’s largest palace, with 1,788 rooms. His aircraft fleet is no less impressive, featuring two helicopters, six small-size planes, one or two Airbus 340s, one 767, and then this seriously upgraded Boeing 747-430, which is the largest and most luxurious one of all. The most interesting part of the story is probably the fact that the monarch actually flies his own planes when he feels like it.

Priced at approximately $38 million, the remarkable Gulfstream G550 business jet is essentially a better version of the highly popular Gulfstream V aircraft. It provides an extra 12,000 km (7,456 miles) of uninterrupted flight with help from two Rolls-Royce BR710 turbofan engines. It reaches a maximum altitude of 51,000 feet, and boasts a cruising speed of 675 mph. This particular luxury toy is one of the very few private jets to flaunt army-grade heads-up display (HUD).

As one of the richest people in the world, British-Indian steel magnate Lakshmi Mittal is the owner of some pretty impressive things: his so-called “Taj Mittal” residence, for instance, features marble sourced from the same query as the actual Taj Mahal, and it used to be the world’s most expensive house, priced at $128 million.

He is famous for enjoying an extravagant lifestyle, as proved by the many star-studded events that he likes to host. For his niece’s 2013 wedding he held three days of festivities that cost around £50 million, and which required the expertise of over 200 staff people from various countries. The 500 guests were kindly requested to sign a confidentiality agreement.

With such a flamboyant lifestyle, it is hardly surprising that Lakshmi Mittal also owns a luxurious private jet like the $38 million Gulfstream G550. The aircraft can hold a crew of two, plus a total of nineteen passengers in perfectly comfortable seats, and surrounded by all kinds of luxury features.

A regular Boeing 757 can transport between 200 and 295 passengers at a time, but when you change the layout to include a lounge area with plush sofas, a lux bedroom with a double bed, and an opulent marble bathroom with golden details, that number is bound to decrease dramatically.

The state-of-the-art technologies, the super-comfortable leather seats, the top-notch entertainment systems, the elegant walnut details, and the shiny golden trims make this one of the top most expensive private jets out there. 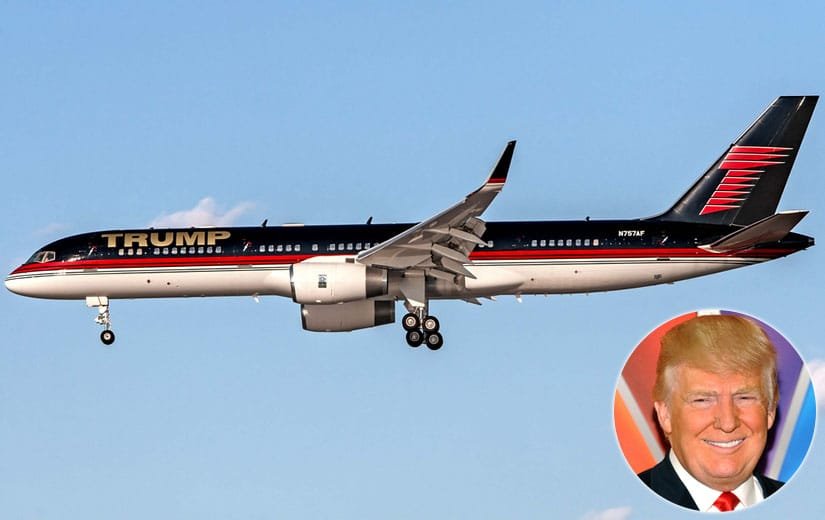 One look at the golden sinks or the Trump family crest that is embossed on all the leather seats in the plane will immediately tell you who the owner of this luxury toy is. The extravagant and somewhat gaudy style of Donald Trump is also immediately recognizable in the gilded seatbelts and all the other numerous shiny trims that are virtually present everywhere. The American mogul reportedly paid approximately $100 million for the makeover, but that’s just nothing in his world of fame and glory.

The name of the luxury private jet comes from its cockpit paintjob and is a clear indication of the fact that this is no regular Boeing 747-33A. “The Bandit” flaunts chestnut finishes, gold trims, and other lavish details throughout. Essentially a plush home-in-the-sky, the airplane is equipped with everything an iconic magnate could need in a private aircraft. The owner and his guests can work, rest, relax, and stay entertained throughout the entire duration of the flight, thanks to the numerous custom amenities onboard. 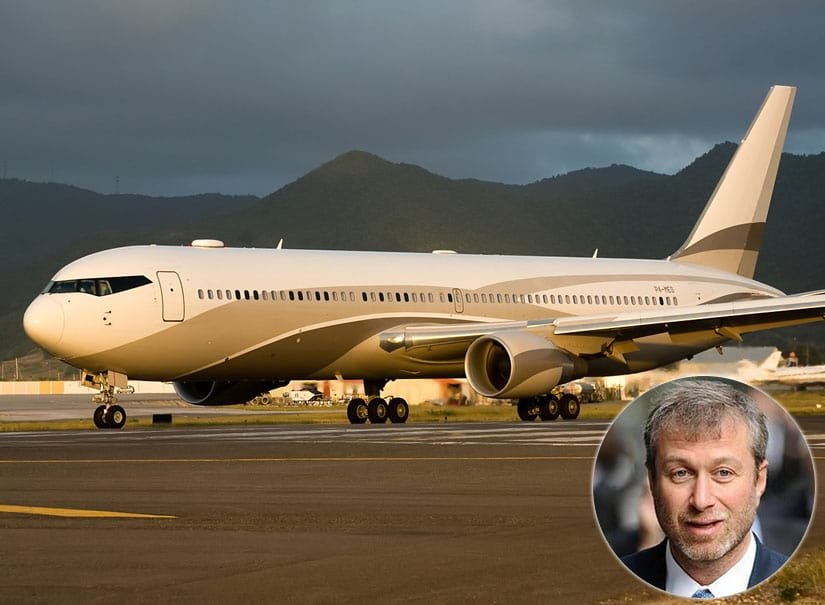 It is a surprise for no one that one of the most expensive private jets in the world is owned by Roman Abramovich. The famous Russian magnate has a reputation as a lover of all things luxury. His collection of extravagant things is truly remarkable, ranging from real estate to modern art and opulent yachts.

His personal fleet includes a customized Boeing 747-33A that people love to film take off or land in various places around the globe. Looking quite understated from the outside, the jet is nothing short of fabulous on the inside, which is only fitting for Abramovich’s flamboyant lifestyle.

This week, it has been one awesome audio product after another. It’s a welcome change of pace after our nonstop features on cars and other cool stuff. So far, we’ve…