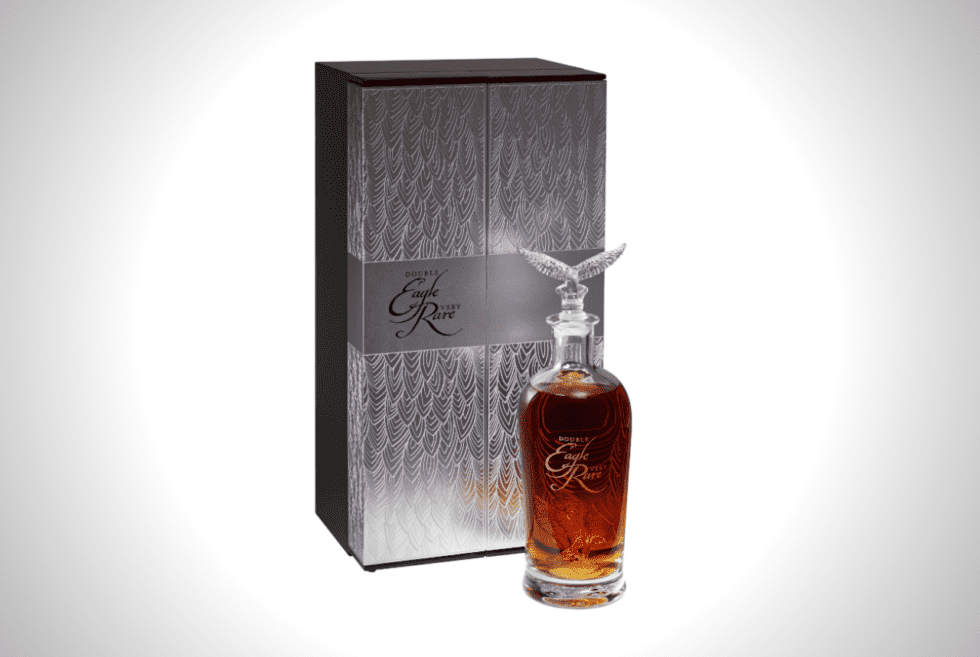 Buffalo Trace only made 299 bottles of its latest gem, the Double Eagle Very Rare Bourbon. Each going for $1,999 a pop, so you need to be quick — and rich.

This is also its oldest-release of the Double Eagle Very Rare yet, clocking in at 20 years old. That’s a full three years older than the 17-year-old version found in the distillery’s Buffalo Trace Antique Collection. It’s also double the age of 10-year-old bourbon bottles found on most shelves.

If you think it’s got a weird name, you’re right on the money. But actually, “Double Eagle Very Rare” has a double meaning. It refers both to the bottle’s age and the two eagles inside the hand-blown container. Again, Buffalo Trace produced no more than 299 bottles. Act fast if you want one, and be prepared to have a $2,000 check at the ready.

A purchase also nets you its fancy packaging, which features a silver box with sliding doors that, when opened, trigger spotlights above and below the bottle. After all, a ridiculously expensive drink deserves all the opulence it can get, even if it means snazzing up the box with its own lights.

Now, for the alchemy. Buffalo Trace says each bottle boasts “hints of vanilla, toasted oak and caramel,” which they say makes for a “gracefully aged oaky flavor.” You’d have to take Buffalo Trace’s word for it.

“We’ve been waiting for this whiskey to mature for years. Even after two decades, these barrel are surprisingly balanced,” said Kris Comstock, senior marketing director for Eagle Rare.

This LG Fridge Is Perfect If You Love Whiskey

Do you love whiskey? Do you want a high-tech fridge? Would you like something that fulfills both these interests? Well, you can have it. The LG Fridge LRFVS3006S is a…

Father’s Day is an interesting time of year for many men and women alike. Some of our fathers passed away or we may have never known them. Meanwhile, there are…

BakerStone Pizza Oven Box converts your burner stove, gas BBQ, or charcoal grill into a legit pizza oven. Plop it down, throw in your dough, and you’re set.

Warm beer is nothing short of torture and we do not wish it upon any man. Keep yourself safe by purchasing a quality cooler with wheels!