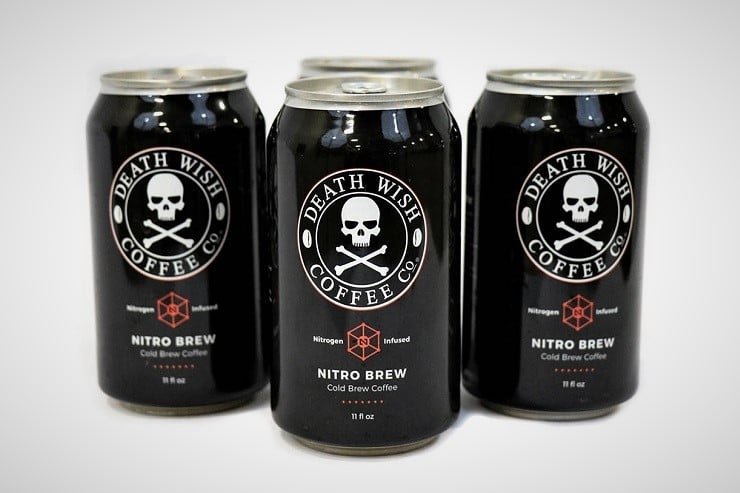 Death Wish Coffee Company has won the war against sleep by creating the most heavily caffeinated coffee in the world. Using Arabica and Robusta beans from India and Peru they have found a roasting method that exudes the maximum caffeine from every bean.

Now they have given their signature coffee a new twist. The Death Wish Nitro Brew Cold Coffee ($15) has been infused with nitrogen to create a creamy tasting brew that features a frothy head. As with all Death Wish Coffee, this too is made with no preservatives and no cream or sugar. Sold in 4-pack, 11 oz. cans, this potent cold brew must be refrigerated for best effect.

It does come with warnings about the extreme caffeine levels and the need to know your limits. Caffeineinformer lists Death Wish Nitro Brew as having 381 mg per ounce. That works out to 3,844 mg. per 11 oz. can. When you figure the average cup of coffee from McDonald’s averages 9 mg/oz and Starbuck’s at 20 mg/oz, you begin to see why drinking responsibly isn’t just for alcoholic beverages anymore!

If you’re eager to try the Coors Seltzer Orange Cream Pop ice cream, it's available for purchase online or at Tipsy Scoop barlours.

If you love a good Scotch but aren’t sure which to try next, take a look at our best blended Scotch whiskies to whet your whistle.

To celebrate the launch of its limited-edition small-batch brew, James Squire had Discommon craft this luxurious bottle opener.

Koko Black – an Australian chocolatier – is teaming up with Modus Operandi and giving us the Koko Black x MODUS Choc Hazelnut Belgian Stout.