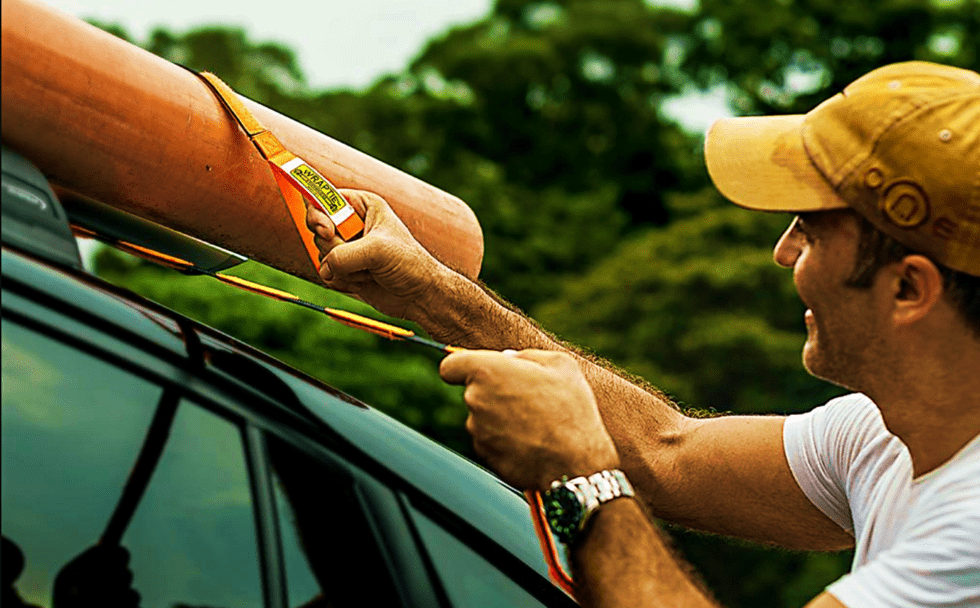 WRAPTIE™ Puts All Other Latches Or Tie-Down Straps To Shame

One of the things most men will agree upon is the issues we have with tie-down straps and latches. Regardless of what you call them, they’re always harder than they need to be. That said, we could not believe our luck to come across WRAPTIE™ as of late.

These tie-down straps made us feel like someone actually listened to us as we yelled into the ether.

We’ve all been there, right? Trying to down a canoe, bike, heck even a tree to our truck or SUV can be a hassle.

The entire design of a truck is to haul this stuff, but they don’t keep it safely there. That is why tie-down straps are so essential. It’s truly annoying to see tie-downs that lock up, tangle easily, or don’t want to crank right.

At Men’s Gear, we’re ashamed to say it took us so long to come across WRAPTIE™. However, we lucked out when we were sent their direction and found that they were made the way all tie-down straps are meant to be made.

Instead of working on a crank or having tangle issues, they work by actually connecting.

The WRAPTIE™ was invented in Australia when a man named Paul McNeill had the idea in 2007. It wasn’t until 2017 that Paul and his co-founder Mark Blackburn finally decided to launch it.

They knew they had something when they were oversubscribed on Indiegogo last year by more than 300 percent! 1 year later and the WRAPTIE™ is sold in over 30 countries around the world.

How WRAPTIE™ Works, And Why They Stand Out

The big deal about the WRAPTIE™ is the way they connect. We don’t mean connecting similar to how you did with your good friend from high school at the HS reunion years ago.

We mean they connect like a long-lost lover who is seeing their beloved for the first time in months.

WRAPTIE™ found a secret to the proper tie-downs strap.

Adding buckles or clamps made things worse for other straps, so they took them away. While obviously, WRAPTIE™ has their secrets to success, they’re also upfront about a lot.

For example, their “Fast Grab” feature is perfect for grabbing any fixed point without an issue or risk of damage. This makes it easier and faster to tie things down.

The real killer is their “Auto-Grab” feature. This is patent pending and helps to make tie-downs 80% faster than normal versions. Think about that for a second, that’s 4 x faster than a regular tie down strap!

Unlike a bungee cord, it could be let out or tightened, depending on the need. All of this can be done literally within seconds, hassle-free.

On top of this, WRAPTIE™ made it impossible to have any leftover strap flapping around with their “Tail End Tidy” feature.

To use the WRAPTIE™ is as simple as using VELCRO, so no more knots or buckles scratching your gear. Due to the fact that it uses industrial strength tabs, it feels super strong. In fact, they actually rate it to secure loads over 100lbs.

It also uses high-tension industrial grade elasticized webbing materials, which means you don’t even need to crank on the strap, like a tie down, to make it secure.

The stretch of the rubber keeps it snug 100% of the time. To release, simply yank it off.

WRAPTIE™ is Multi-functional And Comes In Four Amazing Models

How many tie-down straps do you know of that can be used with literally anything? It’s likely tough to find, and for good reason. WRAPTIE™ has cornered the market here by making the world’s only multi-functional tie-down strap.

You can tie stuff down in your truck, for sure. However, you can also load up for a motorbike road trip, go hiking, and even bundle wood. You could also tie up bed sheets or stuffed animals with ease too.

The company offers four different sizes to fit your specific needs. Not many tie-down straps have several sizes for the needs of the person using from what we know. With that said, WRAPTIE™ clearly wants to change the game.

Here are the models and prices you can check out (currently 10% off with 2 twin packs/15% off with a six-pack):

On top of this, they also offer a Six-Pack Bundle which is normally $109.00 but currently discounted to $92.65. That includes two 130, 180, and 240 cm tie-down straps. This is not a bad offer at all, as you’d be saving a good bit. They’re also available in all black on top of the normal, original colors.

The one you get depends on what you need to tie down. WRAPTIE™ recommend the smaller ones for bikes and camping and other kinds of smaller loads. Meanwhile, bigger straps are helpful for bigger projects like moving or strapping down larger objects.

However, they have one more little trick up their sleeve to avoid shorter rope.

The 130, 180, and 240 WRAPTIE™’s can all attach to each other and double in length! This can make your 8ft strap a little under 16ft. That should just about cover you for everything!

They guarantee the product to be durable too, so much so they’ve added a 1-year warranty to it. As if all that wasn’t enough to convince you, all the WRAPTIE™ straps use recycled plastic. That’s enough to make sure at least 1 plastic soda bottle doesn’t end up in a landfill!

The Tactica F.100 flashlight emits 1000 Lumens of light in a scratch-resistant lens and corrosion and waterproof body designed for any outdoor adventure.