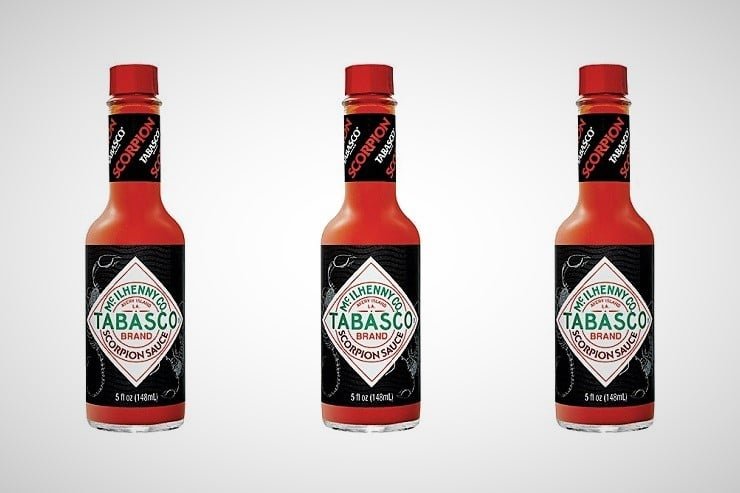 Renown for heating up food for almost 150 years, the McIlhenny Company’s Tabasco brand hot sauce has become a staple for lovers of heat. Besides their signature Red Hot sauce, they have offered seven other varieties with varying degrees of heat and flavor. Now they have added an eighth, limited run sauce, that is reported to be 20 times hotter than their Original!

Tabasco Scorpion Sauce ($8) blends ultra-hot scorpion peppers into a mixture of guava, pineapple, and Original Hot Sauce. With a sweet/hot taste and rated at nearly 1.5 million on the Scoville Heat Unit scale, these scorpion peppers blend with the fruit to create a Caribbean influenced sauce that imbues food with a distinctive flavor along with its volcano-like heat.

Even though this limited run of super hot Tabasco was offered for sale exclusively online, the company reports it took less than 24 hours to sell out. With that kind of popularity and demand we can but hope that McIlhenny Company takes the hint and brings the scorpion back to stay.

Just launch your favorite streaming service and pour a glass or more of these cinema-inspired whiskey offerings from Filmland Spirits.

5 Best Ramen Subscription Boxes You Should Try in 2023

Ramen is the perfect food. It’s cheap, fast, and delicious. But sometimes you get tired of the same old ramen flavors. That’s where ramen subscription boxes come in. They offer…