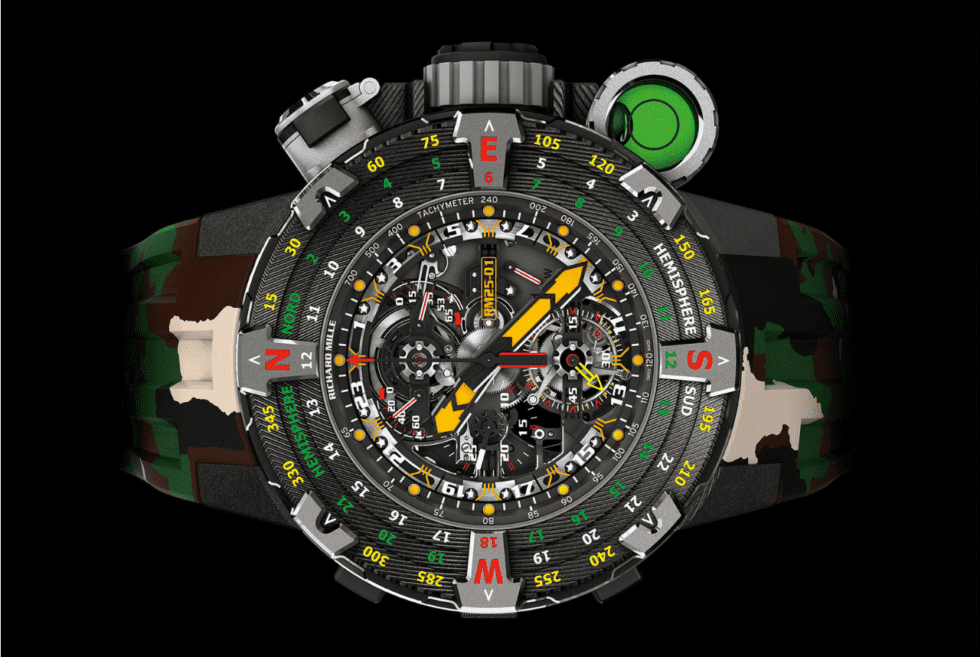 The beauty of the craftsmanship featured by luxury watches is amazing to behold. Intricate inner workings intentionally exposed for the owner to marvel and enjoy. Normally, these models are for formal occasions—preferably with a matching attire to complete the ensemble. For those discerning few that are in the market for somewhat more rugged, maybe even better illustrated as something that Rambo might wear if he was going to an upscale event, the Richard Mille Tourbillon Adventure Sylvester Stallone RM 25-01 is the timepiece that you should own right now.

This horological beast is ready to accompany you to any adventure. The look itself automatically gives it away as a wristwatch for the outdoors. However, don’t let its roguishly-handsome aesthetics fool you, for underneath its military-inspired façade lies a luxury pedigree.

It is something apparently for the macho men (at least those with a cool $1 million to blow away). The wristwatch sports a 50.85 mm x 23.65 mm titanium and carbon TPT case, which also bears an elegant damascene pattern. You also get a removable bezel that can be interchanged from the default bidirectional option and a compass via a bayonet mount system.

Other notable features include a mounted spirit level and a hermetically-sealed compartment that holds around five water purification capsules. The Richard Mille Tourbillion Adventure Sylvester Stallone RM 25-01 will see a limited production run of 20 pieces.

Urwerk Flaunts Their Timekeeping Creativity With The Stunning UR-112 Aggregat

Part of their Special Project collection, the Urwerk UR-112 Aggregat is once again a testament to the brand's timekeeping ingenuity.