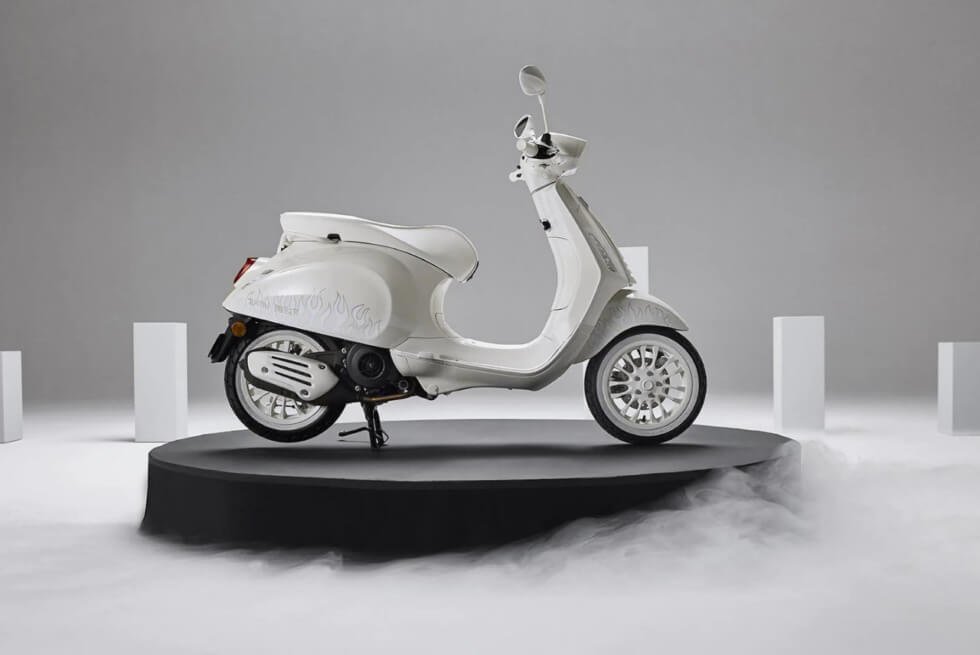 Justin Bieber! You either hate him or love him. However, you can’t deny that he is a successful artist. In fact, his latest album, “Justice,” debuted at number one in 2021. Piaggio surprises the motoring scene with a special collaborative version of its iconic Vespa Sprint. This is a limited-edition version that flaunts an exclusive colorway.

As noted earlier, the specific model for this tie-in with the two-time Grammy Award winner is the Vespa Sprint. To make the two-wheeler stand out from the rest in its stable, Piaggio goes for an all-white colorway. Of course, they’re also adding some visual contrast with the gray flame graphics

These are on the front fender and fairing beneath the saddle. Although not immediately discernible, a script that reads “Justin Bieber” is printed near the tail of the Vespa Sprint. Moreover, there are sections that are in black such as a license plate holder, engine cover, muffler, and kickstand, among others.

The manufacturer states that interested parties can order it in three engine options: 50 cc, 125 cc, and 150 cc. The Justin Bieber x Vespa Sprint rides on a pair of 12-inch rims in white. Meanwhile, the onboard multifunction display boasts Bluetooth connectivity for your smartphones.

Aside from the scooter, Piaggio also teases a pair of gloves and a helmet that mimics the motif of the machine. “I just remember seeing a Vespa and being like, ‘I want to ride one of those.’ And I had such a great time, just the wind flying through my hair, the freedom. It was fun,” according to Bieber. The production run of this Vespa Sprint will last until the end of this year.