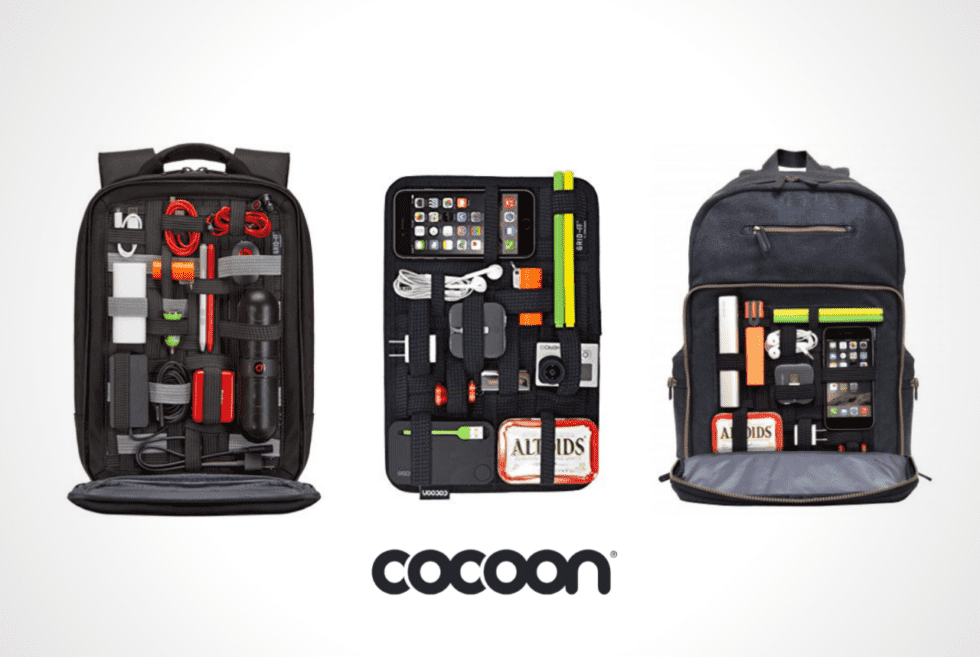 Cocoon: The Brand That Keeps You Organized

When you’re looking for the best companies to keep you organized, it’s often hard to find a great brand for such things. At least, it was hard to find, that is. The Cocoon brand has managed to invent a system of organization that allows you to make sure everything has a place and everything is in its place.

Cocoon technically sells bags like backpacks, laptop cases, messenger bags, duffel bags, gadget cases, and more. The star of their company isn’t so much their bags but rather what they include in a lot of them. They call it Grid-It!®, a currently patent pending organization system that can be applied to any bag or case.

Grid-It!® is a brilliant system of organization that includes rubber elastic bands, which help to keep everything in place. The best part about Grid-It!® is that Cocoon did not invent it to be one, universally set system for all. It was invented with the concept of giving the user the power to organize things the way they wanted them.

All Grid-It!® had to do was give you the tools to make sure your organized vision became a reality. This is why Cocoon has been able to implement it in so many different forms thus far. It works in big or small cases and bags as a result, which only goes on to prove that it’s a tremendous concept.

The question is, what type of bags and cases does the brand have? When looking into Cocoon, you’ll notice that they have a selection of bags and cases that are seemingly endless. This only makes them a better organization overall. They have several different lines or series types within the Cocoon series of bags and cases. These are the ones you’ll see most often:

Most of these lines include bags but some are sleeve or case only. A large portion of these bags and cases include the Grid-It® system with the purchase. However, you can also buy it separately for your current backpack or even add it to the purchase of one of the bags or cases at Cocoon.

The better buy at Cocoon is getting the system with the bag, as the combination saves you more money long-term. If you want to look just into the Grid-It® system, you can click here to look at all the purchase options.

How To Buy The Grid-It® System And Cocoon Bags & Cases The Cocoon brand seemingly has an endless amount of impressive products. However, it should not be forgotten that people love their cases and bags. The brand has won several awards for their products over the years. They won the RedDot Design Award in 2010 for their bags. However, Grid-It® won faveable.com’s Best Travel Gift for Anyone that Travels with Lots of Gadgets in 2017.

This is on top of several other awards they were named in or came close to winning.

Most of their products come with a one-year warranty. In order to fix any issues that might come up with them, you’ll need to fill out a form and send it to them. The type of form you’ll typically fill out can be seen here.

Most of their bags and cases are $100 and under. However, they have a few bags that go for a bit more. The highest bag price is around $250, which makes sense due to it being their largest model. The Grid-It® system is sold for different prices due to it being different for the type of bag or case you’re using.

The price for one of them goes for $15 to $50, which is a steal for such an inventive organizer.

To buy any of the bags and cases or just one of the Grid-It® systems, click one of the links below.

If you would like your product reviewed and featured on Men’s Gear as well as its vast social media channels, e-mail Joe@Mensgear.net today!

The Marshall Motif A.N.C. is compatible with wireless chargers and adds another 20 hours on top of the 4.5 hours battery life of the earbuds.