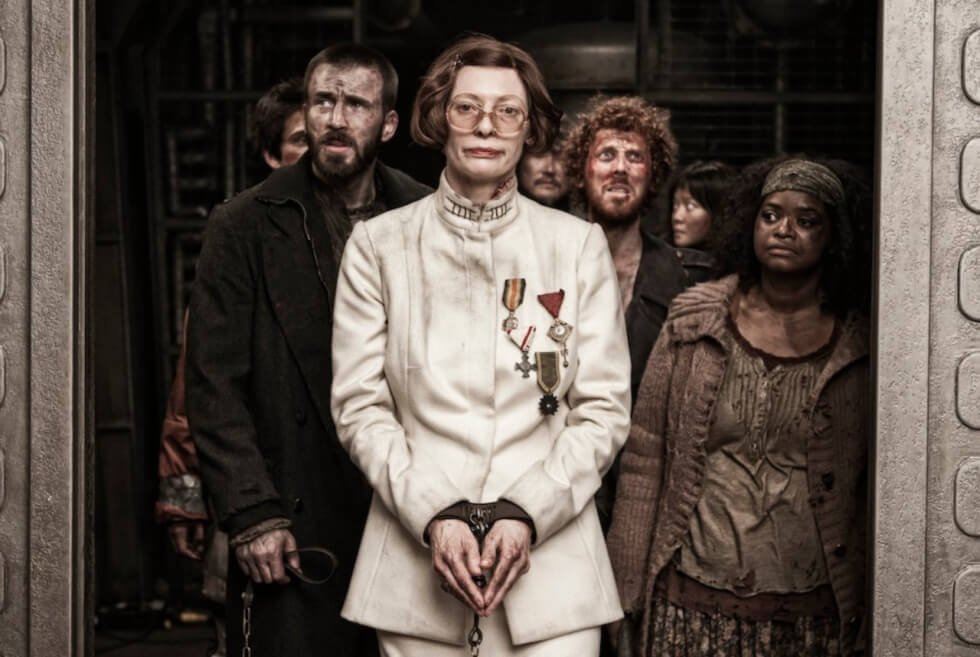 One cannot imagine what awaits us years from now although we tend to gravitate toward positive thoughts. Especially with the advancement in science and technology, we can only hope that they bring about a great, bright future. But we have witnessed over time alchemy’s law of equivalent exchange. To achieve greatness one must make meaningful sacrifices. In the brightness, there is always darkness. Life always leads us to both bad and good things and greed, one of mankind’s greatest sins, can result in a grim future.

This much has been engraved in the deep recess of our minds not just in literary findings but also through creative means: the cinematic world. If there is one thing that dystopian movies have taught us, it’s that life is unpredictable. One moment you are enjoying a quiet time at the beach and the next thing you know, you’re being dragged to your death by strong currents. That simple flu-like feeling can turn into something more fatal.

“Dystopia” pertains to a society or a situation marked by extreme suffering or injustice and is usually post-apocalyptic in nature. It can be the remnants of a natural calamity or the consequences of man’s grave mistakes. Dystopian movies may be hard to watch albeit also intriguing as it shows the very core of human nature. They affect us psychologically and emotionally. This being said, let’s take a look at these films and scour the titles available on Netflix. 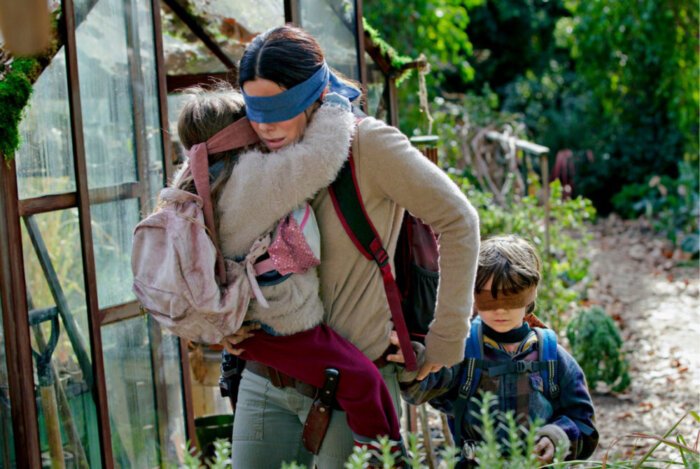 What would you do if you see your worst fear materialize before your eyes? Would you faint or drop dead from sheer terror? The story in Bird Box revolves around this very premise. The population is reduced to a ragtag crew of survivors after tragedy befell those who dared to look fear in the eyes.

The film opens with the mysterious appearance of a nefarious entity that takes the form of man’s fears. Its existence led to a post-apocalyptic world, where the remaining human population finds having the use of their eyes more of a curse than a blessing.

Sandra Bullock takes center stage as a mother who must do everything in her power to protect her children, even to the detriment of her own safety and sanity. Armed with determination and bravery, they venture into dangerous territory and go on a tumultuous journey toward where hope awaits with eyes blindfolded.

There is something totally terrifying when you’re forced to surround yourself with darkness and rely on your other senses in order to survive. It’s quite a contradiction to how we’re programmed to live our life — with eyes wide open. It’s ironic when we’re constantly told to face our fears if we want to live and succeed. Still, if there’s one lesson “Bird Box” tells us, it’s that hope is never lost no matter what fate brings. 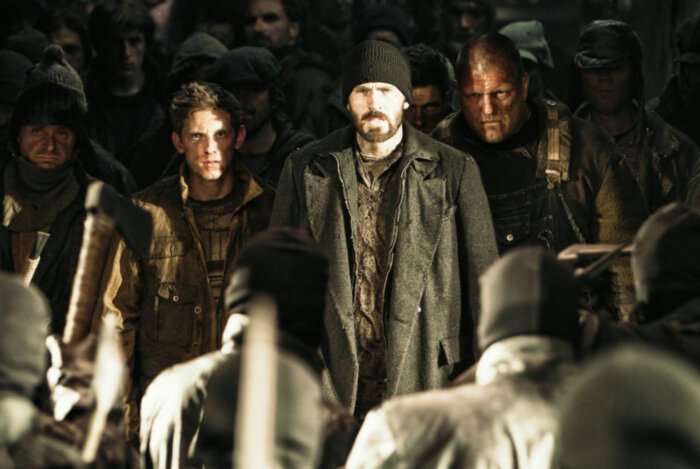 Survivors of a failed climate-change experiment that wiped out most of all life forms on earth are forced to ride their lives out in a perpetually moving train called the Snowpiercer. Inside, a caste system dictates who gets to live or die.

Naturally, those who fall in the lower class are subjected to prejudice. They live in inhospitable conditions cramped up in the farthest part of the train. They struggle to live through meagre food rations.

Meanwhile, the affluent continue to live like there is no suffering, sickness, and death happening farther down. They live in grandeur, unaware of the strife that surrounds them.

As with any class system, there tends to be a revolution against discrimination. This film culminates with those poor brave ones making the journey forward to revolt against their unjust treatment. They risk their lives for a taste of justice and opulence.

Snowpiercer may be set in a steampunk, dystopian future but its story is very raw and real. It tells of despair and rage and of the hopelessness that poverty can bring. 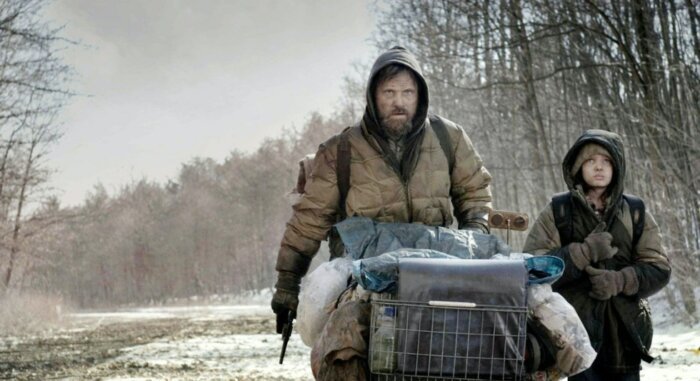 A father and son fight to survive in a post-apocalyptic world where humanity is merely a shred of hope. They battle freezing temperatures and hunger, all the while trying to steer clear out of trouble. For in this world, mankind fights against their own in their plight to live. They do the unfathomable for a morsel of bread, for a tiny roof over their heads, and for a pair of gloves to keep them warm. Everywhere there is despair, destruction, fear, and danger from thieves, vicious gangs, and cannibals.

Vigo Mortensen is a father who vows to put his child’s safety and life above his own. He battles his own raging illness to protect his son and take him away from their vile surroundings. Even if it means going on foot, scavenging for food when it’s safe to stay out, and mastering all his strength and courage to fight.

Truly, it is a parents’ nightmare to see their child harmed in any way. It is their heartbreak to see them leave this world before you. No parent has to ever see their children die first. This fact propels the story forward as father and son fight their way to survival. 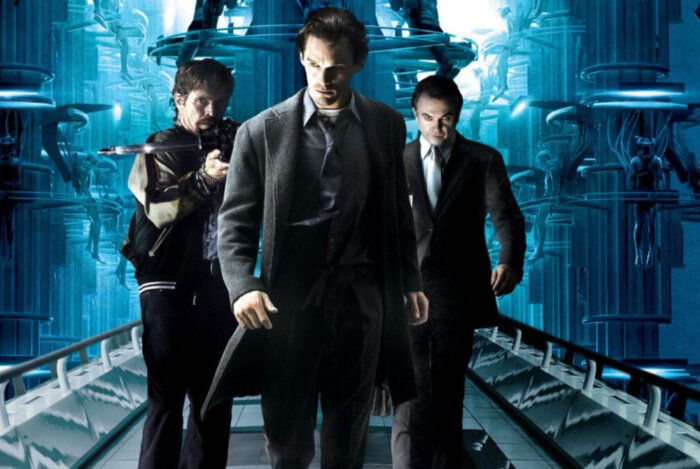 Daybreakers imagines a world where vampires dominate the human population in the aftermath of a plague. It is the year 2019 and the remaining 5% of the living race are forced to co-exist with the bloodsuckers that roam the earth.

But hunger can bring out the worst in anybody. Food supply eventually falls short and danger starts to rumble as these vampires start to turn vile and break the adapted sense of normalcy and peace.

In the background is Dr. Edward Dalton (Ethan Hawke), a vampire hematologist. Sympathetic to the plight of the humans who wish to not become blood banks, he is in a race against time to create synthetic blood. But an encounter with Lionel Cormac, a vampire-turned-human (Willem Dafoe), ultimately alters his goal. 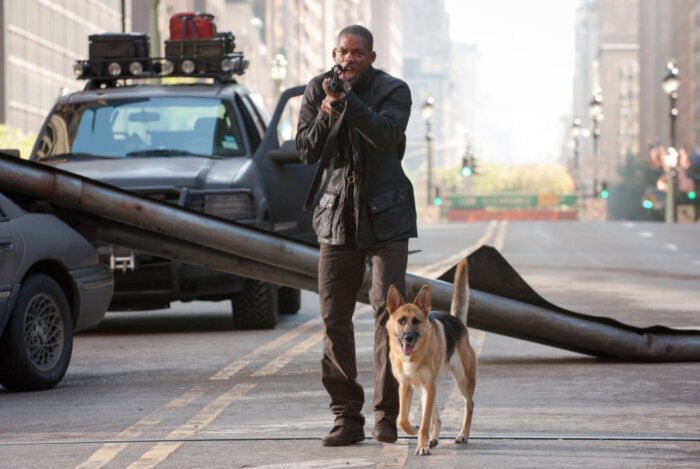 US Army Scientist Robert Neville (Will Smith) and his loyal canine companion Samantha brave zombies in a post-apocalyptic New York. They roam the streets in the daylight doing security checks, scavenging for their sustenance, and looking for other survivors, while the undead sleep.

In the night, they hide out in their protected shelter. There is a sense of calmness despite the danger that lurks in the dark. Man and his best friend adapt to their mundane tasks on a day-to-day basis. But everything changes when the zombies decide to brave the light in their search for food.

This film tells the poignant story of the close bond shared between man and beast. It is thrilling and scary at best, but also heartwrenching when one has to make the ultimate sacrifice for the sake of the other. 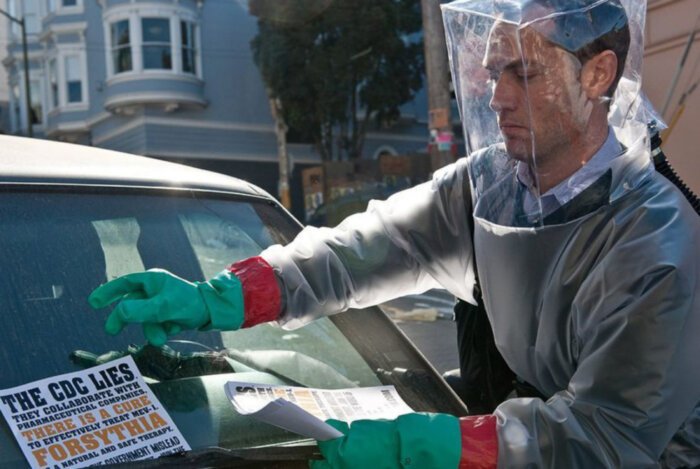 Who would’ve thought we would live to actually see the horrors depicted in this film. It has been a decade since Contagion threatened viewers with the possibility of a global pandemic. Now that threat is very much real as the human population now strives to outlive the COVID-19 pandemic.

The situations in the movie relate deeply to what’s happening in the world right now. What initially starts as the flu turns into something deadly. The virus soon spreads, sending people to hospitals and to their deathbeds. No one could have prepared people to face the stark reality that this movie brings with the onslaught of the Novel Coronavirus.

Scientists race against time to find a cure and a vaccine. Health care workers risk their lives to care for those infected. Other professionals brave the outside world while others are forced to shut themselves in isolation for fear of the disease. The world as it is continues to live in this nightmare with no projected end in sight. 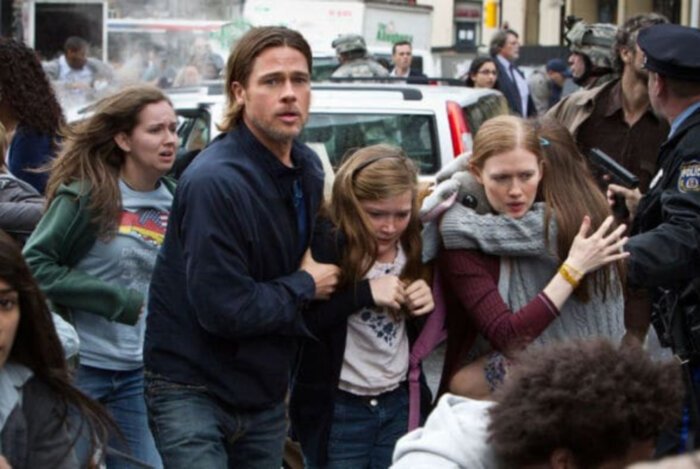 This is a new take on the virus-turns-people-into-zombies trope. The premise is there, a mysterious virus suddenly turns humans into the undead. Total chaos eventually ensues as people panic in their search for safety. The world is put in a state of a pandemic as scientists scramble to find the source of the virus in order to find a cure and the military try to reinstate peace.

But there is a twist. Turns out that these zombies or the infection per se, are quite selective. They only go for the healthy ones and ignore those who are sick. The film is great with its jump scares and heart-raising tension. For a zombie flick, this one is unique. 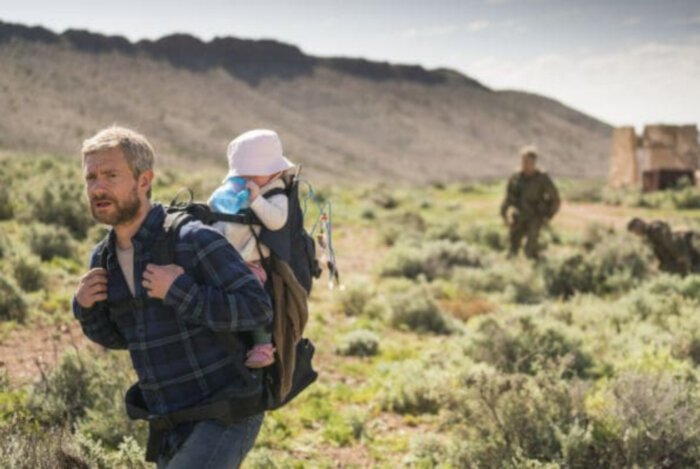 This underrated film takes place in rural Australia in the aftermath of a pandemic that has turned humans into hostile zombies. An infected father makes a dangerous trip across grasslands inhabited by these vile creatures in search of a safe shelter for his infant child.

He must reach his destination before the infection completely ravages what’s left of his humanity. He desperately tries to find a way to protect his child not just from the dangers surrounding them, but from himself. 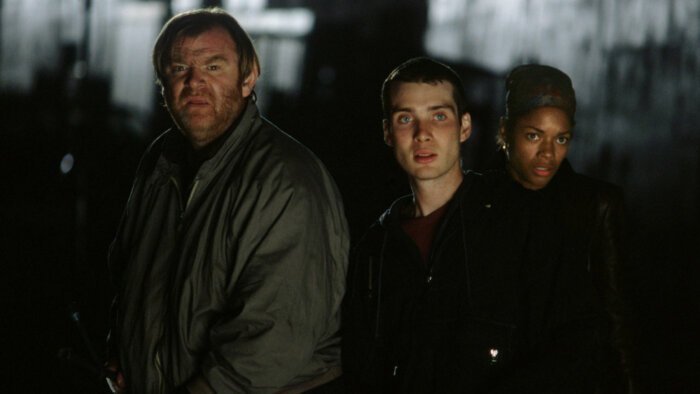 28 Days Later set the stage for what the many zombie flicks and series that came afterward. Viewers were thrilled, intrigued, and scared at the virus-turned-humans-into-zombies idea because it was something fresh at the time. Plus, the undead in this movie move fast.

The film follows our protagonist Jim (Cillian Murphy), after he wakes up from a coma in an abandoned hospital. He walks a deserted city and sees no living soul in sight. Instead, what he finds are hordes of zombies roaming London. He is completely baffled as he has missed 28 days of his life. He is thankfully saved by the few survivors that are in hiding. Suffice to say, this film did not disappoint it even birthed to a sequel 28 Weeks After in 2007. 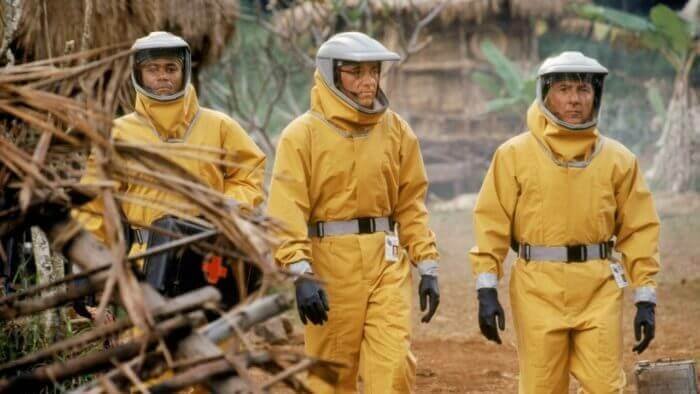 An Ebola-like virus called Motaba puts the fictional California town of Cedar Creek under lockdown 28 years after it first killed a group of soldiers in Africa. The origin of the virus comes from a monkey and while the army has already eradicated any trace of its existence by burning the soldiers’ camp, it still manages to find its way to the city.

The film treks the challenges and the efforts made by the CDC and army doctors to contain the virus within the confines of the town. They eventually resort to a martial law ruling to prevent people from leaving and spreading it through air.

Interestingly, Outbreak premiered in theaters on March 10 when the real-life Ebola outbreak was happening in Zaire. Now the whole world is going through another outbreak with certain countries on lock down amid the COVID-19 pandemic, in a bid to prevent the spread of any fatalities brought by the Novel Coronavirus.

Netflix will charge an additional fee for accounts that share passwords with users outside of the household.

The Best Steak in The World: 20 Steakhouses You Have to Visit

Curious about the best steak in the world? Why not check out our well-done list of 15 amazing steak houses you must try.

Here're the 50 shortest actors who are not short of talent or fame, and not let their small stature stop them from achieving their dreams.