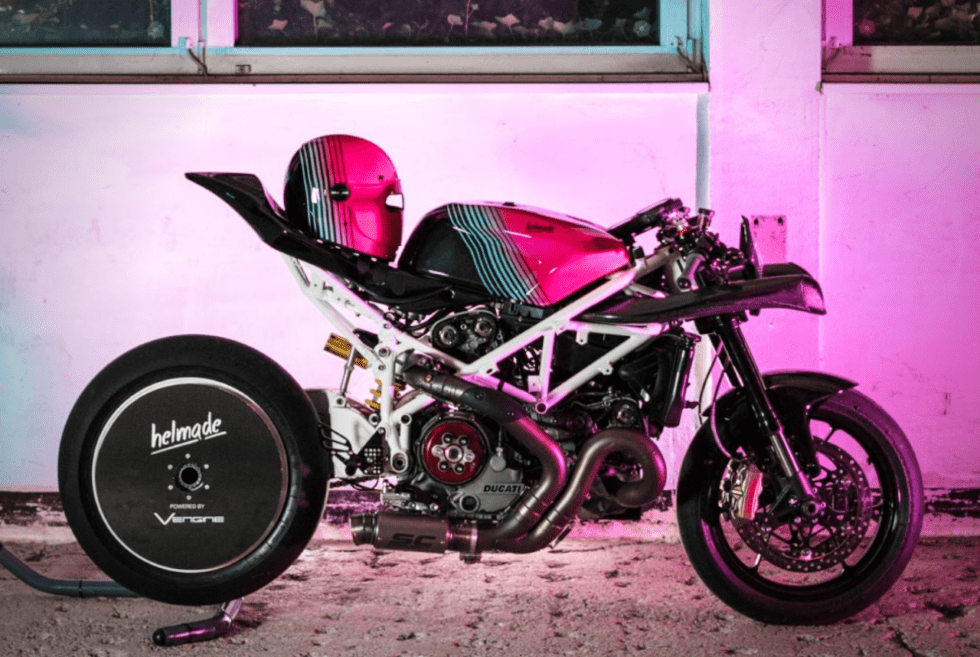 What do George Lucas, Ridley Scott, Terry Gilham, and Denis Villeneuve all have in common? They’re all terrific directors, for one. But the most notable common denominator among these men is that each of them has made an excellent science fiction flick at least once in their careers.

Which is why all of them would probably love Vengine’s new Ducati 999S, a straight-up badass custom ride that takes cues from beloved dystopian tales like Blade Runner and Tron. You can throw this slick bike and helmet combo into any of those director’s sci-fi flicks and it’ll fit right in.

Let’s talk about the helmet. It was made on a base Bell Bullitt and boasts two halved eye ports in the visor, which harks back to the first Formula 1 racing elements from Bell. Now, on to the bike. Vengine took a standard Ducati 999S with a 136 horsepower V-twin engine and threw in a slew of performance upgrades. Among them is a new exhaust system, Diavel pipes, an SC-Project can, and an Ohlins 1098S swingarm and shock. The front end was taken from an Aprilia RSV4.

Vengine coated both the bike and helmet with splashes of neon. It’s as if they took inspiration from Tron. Look, we understand that pink is traditionally a feminine color. But there’s just something about how this whole thing is presented. It makes that hot pink paint job not emasculating one bit. On the contrary, it’s slick, fun, and stylish. Kind of like when David Bowie wore something terrible and made it look cool. Vengine took pink and made it appealing even for men.

This Rikuo Type 97 bike comes perfectly restored, with all its historical flourishings intact.

Why settle for a stock Porsche 911 Turbo when you can unlock even more with the Gemballa GTR 8XX Evo-R tuning package.