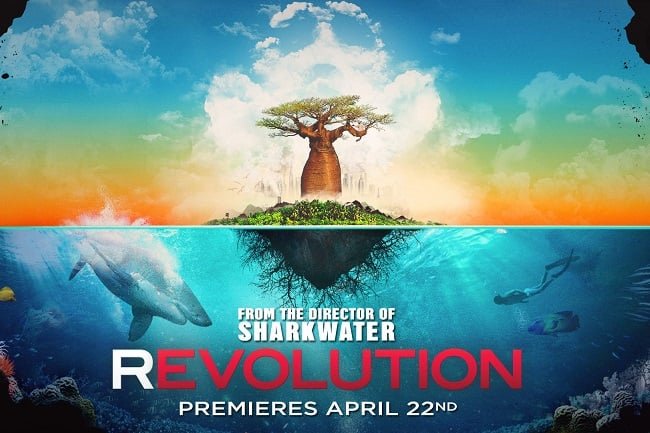 The last time the oceans went down was 65 million years ago, wiping out almost all life on Earth! Scientists say we are facing this threat again, and it could happen in the next 20 years. Decided to raise awareness on this survival issue, the internationally-awarded film director Rob Stewart brings us the eye-opening Revolution Documentary ($4,80).

This highly anticipated follow up of the hit Sharkwater is a true life adventure that took 4 years, traveling through 15 countries into the greatest battle ever waged, to prove that this is no longer about saving the oceans, it’s about saving ourselves! Featuring incredible wildlife spectacles of sharks and cuddly lemurs, microscopic pygmy seahorses, and deadly flamboyant cuttlefish, Stewart reveals that our fate is tied to even the smallest of creatures, from the coral reefs in Papua New Guinea to the rain forests in Madagascar.

Startling, beautiful, and provocative, Revolution is an inspiration to join the biggest movement in history that’s rising to the challenge of saving our world. An essential viewing for everyone, this documentary has already won 10 awards, including the Audience Award for Best Documentary at the Atlantic Film Festival. It’s time to spread the word!

The Parachute Leather Sling Chair comes in an oak frame and vegetable-tanned leather for the seat and back that conforms to your shape over time.