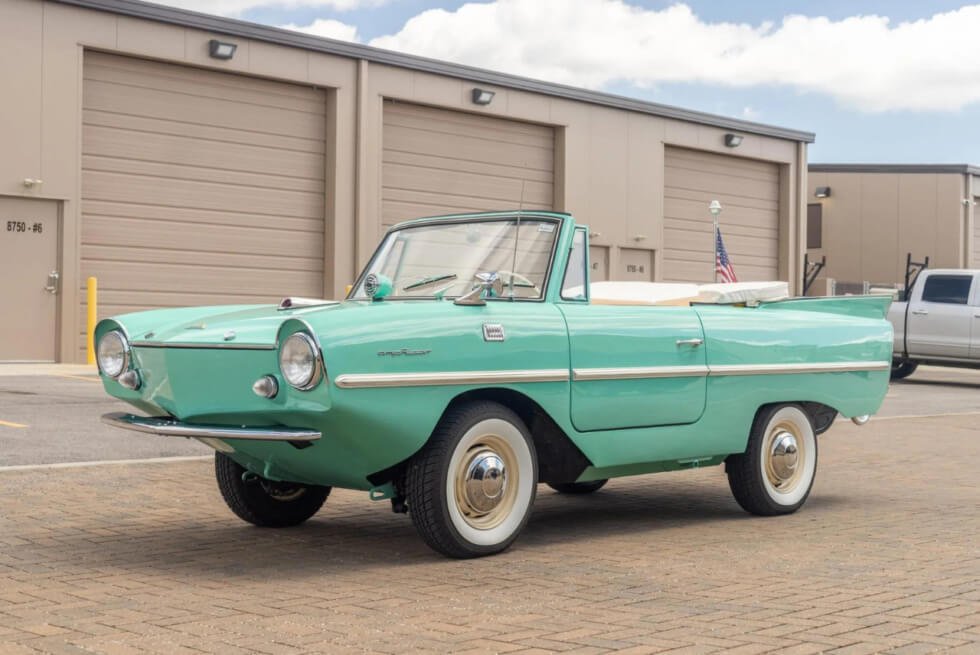 When Rolls-Royce unveiled the extremely exclusive Boat Tail, people collectively praised its design. Luxurious craftsmanship plus a silhouette of a leisure watercraft, the first two units were bespoke masterpieces. However, its capabilities pale in comparison to the 1964 Amphicar Model 770. This machine’s refinements may be lacking but it makes up for it with functionality.

This whimsical little number is the work of Hans Trippel and was in production from 1960 to 1965 in West Germany. The 1964 Amphicar Model 770 made its official debut at the 1961 New York Auto Show. Only 3,878 examples were ever made and Bring A Trailer manages to have one up for auction. As of this writing, it’s already at $58,000.

The cool part here is that, unlike the Double R emblem’s Boat Tail, this vehicle is amphibious. The name is a giveaway that it can travel on both land and water. Powering this cool contraption is a Triumph 1,147 cc OHV inline-four paired with a two-part four-speed manual gearbox. Output is 43 horsepower and 61 lb-ft of torque.

Despite how it looks, the doors form a tight seal to keep the cabin watertight. This 1964 Amphicar Model 770 flaunts a vibrant Fjord Green exterior with chrome trims. Meanwhile, the cockpit is embellished with white and yellow upholstery. On land, it rides on four 13” yellow steel wheels with hubcaps. At the rear, you’ll see two propellers to facilitate propulsion on the water.

To ensure safety while sailing on this strange vessel, it comes with a marine horn and lighting. A white tonneau cover is likewise available just in case bad weather strikes. This 1964 Amphicar Model 770 might not be for everyone, but some might want it for their collection. Interested Air owners need to fork over $6,000 and wait until 2023 to get the "Stealth Look" package for their electric saloon.