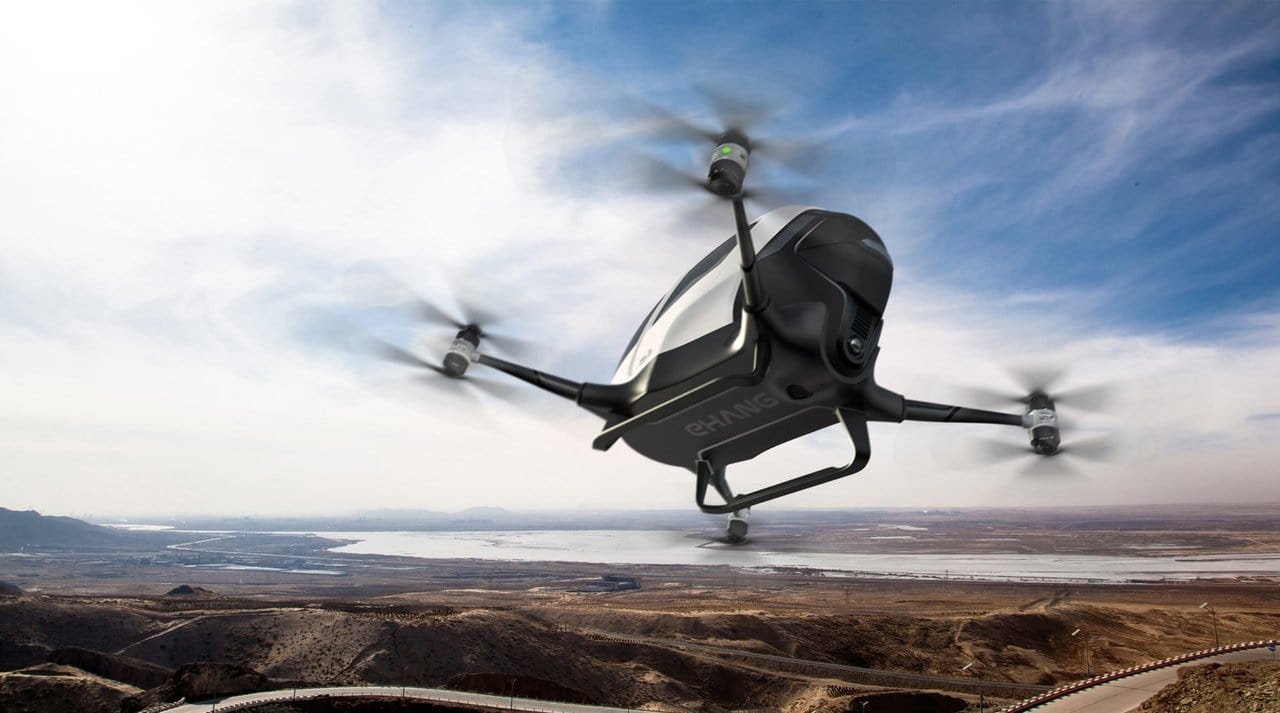 Dubai to get the Self Flying Drone Taxi this Summer

While Tesla, Uber, Apple and Google are busy thinking about self-driving cars, a Chinese drone maker has unveiled a giant self-flying drone taxi known as the EHang 184. This giant drone is big enough to fit an adult human passenger and is fully automated so users will not need a pilot’s license to use it.

This move, which will is certain to make Uber drool, was unveiled in Las Vegas at the Consumer Electronics Show. It is made by EHang, which is a Chinese company known for making high-end intelligent drones like the GhostDrone 2.0 for personal use and the Ehang Falcon for commercial use.

The EHang 184, which got its name from its unique characteristics: 1 passenger, 8 rotors and 4 arms, has caught the attention of Dubai authorities. Dubai aims at ensuring that 25% of all passenger movements in the country are done on driverless vehicles by 2030. This drone seems like a step in the right direction.

A few weeks ago at the fifth World Government Summit, EHang and the Dubai Roads and Transport Authority (RTA) announced that they will be introducing the EHang 184 into Dubai. The goal is to build the most intelligent transportation system in the world.

“The step will enhance the integration between public transport modes and people happiness through the provision of smooth, quick and innovative mobility” said Mattar Al Tayer, who is the Chairman of the Board of Directors and the General Manager of the Dubai RTA.

Mattar also said that test flights have already been done in Dubai sky in coastal and even desert environments. In these tests, the Dubai Civil Aviation Authority (DCAA) provided support in giving contribution that helped in defining the safety requirements. The authority also inspected the vehicle and issued the permits for the tests.

Those who were present in the summit watched videos of some of these test flights in Dubai.

The EHang 184 is an autonomous drone. This means that once the passenger sits, the only requirement will be to enter their preferred destination and to tell the drone to take off. From there, the drone takes care of everything else.

It has a smartphone stand and a cup holder. Other than that, the cockpit is virtually empty. The Dubai RTA plans to launch passenger flights on this drone taxi in July.

How Safe is the Drone Taxi?

Being an automated drone has its advantages, but it also comes with a fair share of problems. The first problem is the lack of control should something go wrong during the flight. According to George Yan, the co-founder of EHang, the drone comes with sophisticated back-up systems that make the drone very secure.

It even says on the official company website that the system used on the EHang 184 is fail safe. Should there be a problem in any of the components on the drone, it will immediately land in the nearest safe area to ensure safety of the passenger. They have also encrypted communication to prevent third parties from taking control of the flight.

Passengers also have the option to pause the flight and have the drone hover at one point in the air should they sense a problem.

The drone has room for one passenger and a small suitcase at the back. Since it runs primarily on electric power, it doesn’t have a big range. It works best on short to medium trips not longer than 30 miles. However, this also means that it doesn’t use fossil fuels hence it’s a friendly to the environment. The EHang 184 drone taxi can fly at around 60 miles per hour.

“You know how it feels to sit in a Ferrari? This is 10 times better” Yan told the Daily Mail in an interview. The drone will take off and land vertically, and the flight path will look like an inverted U shape. This means that you will get to your destination faster since there are no obstacles to go around in the air.

By making it 100% automated, the company will be eliminating one of the most common causes of road accidents: human error. It will be able to carry a single passenger weighing less than 220 pounds.

EHang is working on getting licensing from the Federal Aviation Authority to bring the EHang 184 to the US.