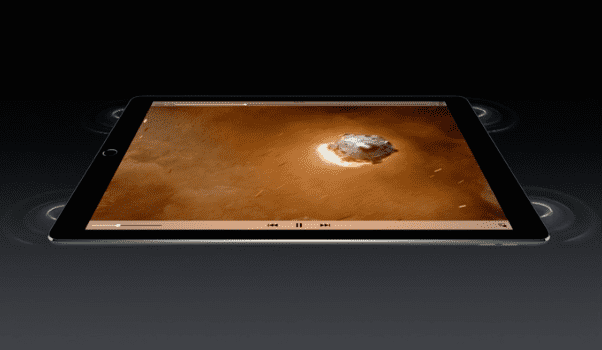 More iPad Air 3 specs have been revealed by a not so reliable source, which says that the upcoming tablet will feature a 4k display, 4GB of RAM and a larger battery.

It was recently reported that Apple has plans to unveil the iPad Air 3 at a special event in March, alongside the iPhone 5se, updated Apple Watch and OS updates.

The latest rumor, coming all the way from Chinese website DigiTimes, states that Apple will fit a 4k display on the iPad Air 3. The website hasn’t been very reliable in the past, so take this with a pinch of salt. We probably may not see Apple include a 4k screen on the 9.7 iPad, as the current generation already has a pretty good 2,048 x 1,536 resolution Retina display.

However, anything is possible, and we could see the iPad Air 3 equipped with a 4K resolution display. A recently leaked schematic showed the iPad Air 3 with a rear LED flash and four speakers similar to the iPad Pro. It is also believed that the iPad Air 3 will not sport a 3D Touch display.

A higher resolution display will require a much faster processor, more RAM and larger battery. Even with all that, we don’t expect it to be substantially better than the iPad Air 2 in performance. A 4K screen will use a lot of processing power, RAM and battery.

The website also states that to cope with the larger 4K display, Apple will include 4GB of RAM and a much larger battery. The current iPad Air 3 has 2GB of RAM and a 7340 mAh battery. Apple touts the iPad Air 2 to have a 10-hour battery life. To achieve such a feat on a 4K display equipped iPad Air 3, they will have to go big on the battery.

According to the report, Apple still believes that there’s a fan base who would purchase the iPad and provide good sales for the company. The iPad business has been slowly decreasing, but it’s still bigger than all Android tablet sales put together.

A newly leaked schematic for the upcoming iPad Air 3 shows a slightly refreshed design, which includes four speakers and an LED flash.

While we’re not sure how accurate this leaked design drawing can be, it would be nice if Apple included four speakers on the next-gen iPad Air 3. So, take this with a pinch of salt.

Apple introduced the iPad Pro and updated the iPad mini four last year, but left out the iPad Air. The iPad Pro was the first device to include four speakers, which improved the sound quality and loudness. Several reviews praised the new speakers and how it did provide true stereo sound.

There would be two speakers at the top and two at the bottom when held in portrait orientation. Even if you hold your hand over one of the speakers, there would be enough sound coming from the other speakers.

It is understandable to add a flash to the iPad mini, but the iPad Air is too large. Not many, we hope, use the iPad Air for photography, therefore eliminating the need for a flash. The iPad Air has a 9.7-inch display, and although it’s thin, it’s no camera.

According to several reports, the iPad Air 3 release date is set for the first quarter of 2016. It may also be announced alongside the iPhone 5se in March this year. Or, Apple could hold a special event just for the iPad Air 3 and iOS 10.

Update 14/February/2016: Apple plans to release the 4-inch iPhone 5se and iPad Air 3 tablet on Friday, March 18,according to a report from 9to5mac.