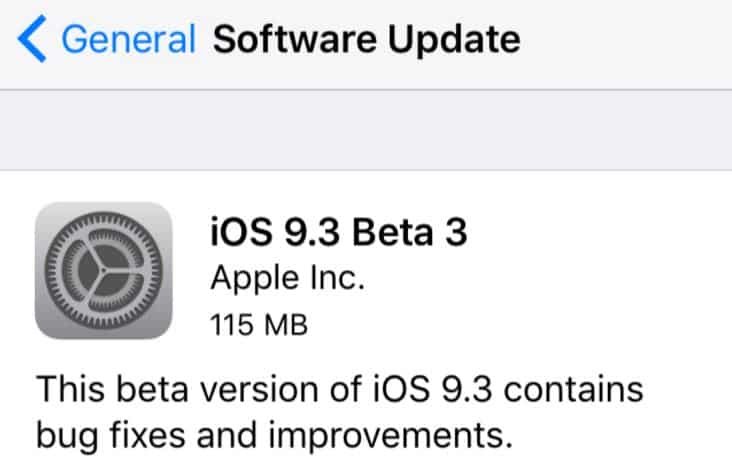 Apple has released iOS 9.3 beta 3 to registered developers and is currently available as a standalone download or an OTA update.

If you’re already running iOS 9.3 beta 2, then you should be notified of the new beta release soon. If not, head over to Settings>General>Software Update. The new beta is also available from the iOS developer website.

It took Apple two weeks to release the third beta and almost a month since the release of the first. iOS 9.3 is going to be a major update and includes several new features and updated apps.

One of the biggest changes in iOS 9.3 is the new Night Shift mode. Several apps such as News, Notes, Health, and more have been updated with new interface and features. There are plenty of new 3D Touch Actions available for system apps as well.

iOS 9.3 beta 3 carries the build number 13E5200d and brings some new features. First and foremost, Verizon users can now enjoy WiFi calling with the latest beta. Secondly, a bug on the T-mobile network, which caused Apps from not loading over a cellular connection, has been fixed.

We haven’t seen a jailbreak for some time now and iOS 9.3 Release Date is unknown. There probably won’t be a jailbreak until a solid version of iOS is out.

We’ll update this article when we know of other changes in iOS 9.3 beta 3. Apple is said to release iOS 9.3, watchOS 2.2 and new products during a Special Event in March.