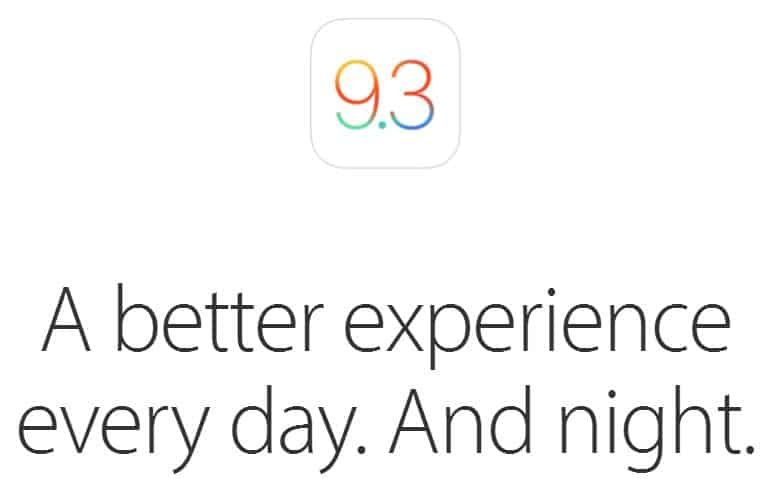 Apple has released an iOS 9.3 beta to registered developers with a new Night Shift mode, new features and updates to some stock iOS apps.

The iOS 9.3 update is a major one, features a lot of new stuff, provides better performance and is the biggest one since the release of iOS 9.0.

Apple has also launched a new iOS 9.3 Preview page that showcases everything that’s new with the update.

With the iOS 9.3 beta release, developers can test out some of the new features and give their feedback to Apple. There’s bound to be bugs, which is why developers get the release first. Here’s everything that’s new with iOS 9.3:

Night Shift: This is a neat new feature that a lot of people have been asking for. With Night Shift, your iOS device will know when it’s night time in your location and change the display temperature to suit your eyes. A warmer display at night is better for your eyes and a cooler display during the day.

Notes: The stock Notes app on iOS can now be secured with TouchID. You can now lock individual Notes and also sort them according to date created, date modified or alphabetically.

Apple News: The News app is updated and features a better ‘For You’ section that provides improved article selection. The app also gets Landscape mode and is smoother and responsive than before.

Apple Watch: Starting with iOS 9.3 and watchOS 2.2, you can pair multiple Apple Watches to your iPhone using the Watch app.

Health: The updated Health app will now display stats like, exercise, stand data, goals and more directly on the Apple Watch. It’s also easier to find Health-compatible apps thanks to new categories such as Weight, Sleep and more.

CarPlay: In iOS 9.3, CarPlay gets new features such as improved support for Apple Music with ‘New’ and ‘For You.’ There’s also a new Nearby tab that shows points of interest like restaurants, coffee, gas, etc.

Education: Lastly, the latest iOS 9.3 updates will feature multiple users alongside a new Classroom app. With this app, students can log-in to their profiles on iPads in classrooms. Teachers can use the app to check on their students progress and help with lessons.

If you’re a developer, you can download the latest iOS 9.3 beta update from the iOS developer portal and test it out.