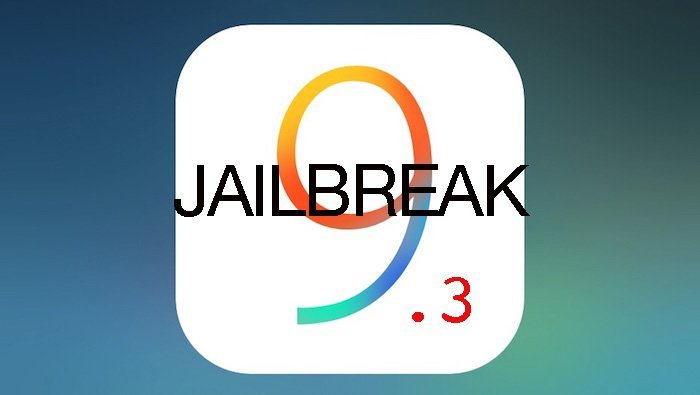 LATEST – At the MOSEC 2016 Conference being held in China, Pangu showcased a working iOS 10 jailbreak to the audience. The mirrored their iPhone which was running iOS 10 and had Cydia on the recent apps Widget. They even launched the Cydia app and showed some tweaks. 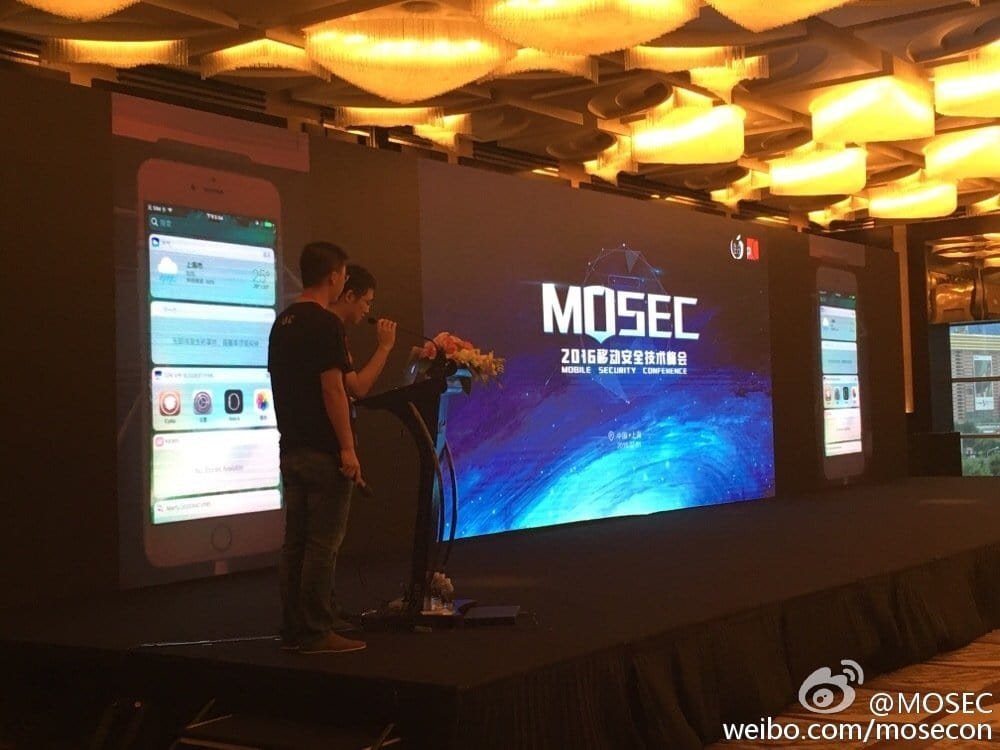 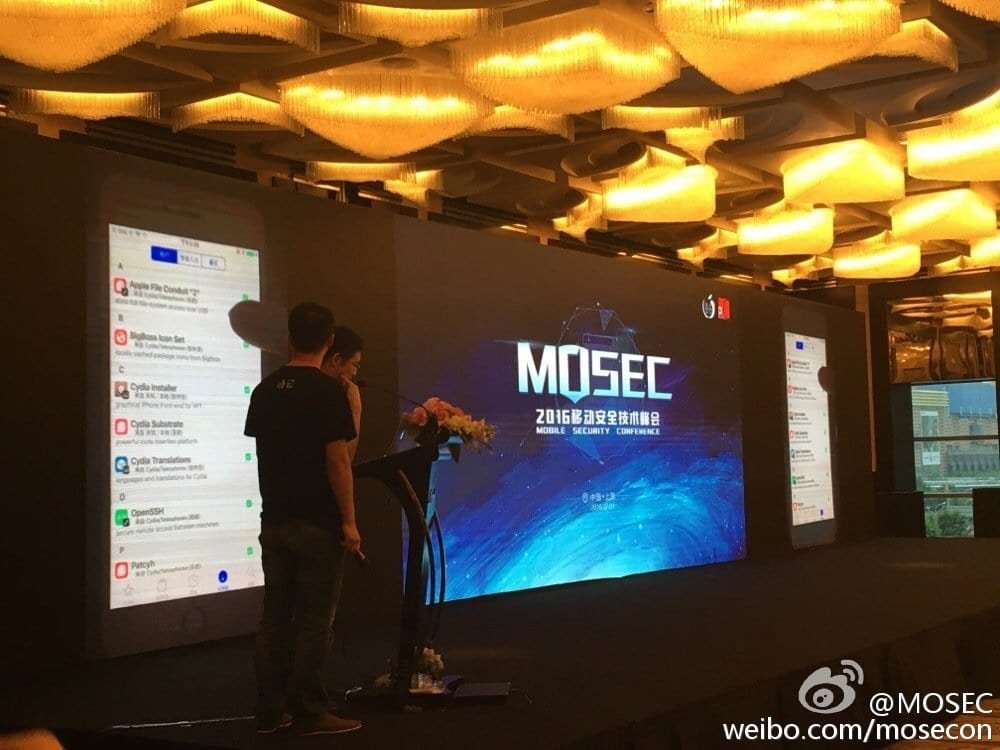 The above images were posted on the MOSECON page on Weibo.

After the iOS 10 jailbreak demo, Pangu also gave some insight on iOS 9.3.2 jailbreak. The team spoke about privacy problem in iOS 9.3.2, but didn’t really say anything about a potential release date.

Pangu is a very popular jailbreak team hailing from China, and they’ve delivered two working iOS jailbreaks in the past.

It looks like we may get an iOS 10 jailbreak instead of iOS 9.3.2, which is currently the latest iOS version available. Apple is said to release iOS 9.3.3 soon, but the final iOS 10 update will arrive later this year. And perhaps a jailbreak as well, if Apple doesn’t patch the vulnerabilities in future iOS 10 betas.

Update – June 19, 2016 – It has hardly been a few days since the release of the first iOS 10 beta, and it has already been jailbroken. That’s right, an iOS 10 jailbreak is possible, we do not know how, but it is. And there is video evidence.

Well known iOS hacker and developer of tools such as Sn0wbreeze, iH8sn0w, has released a video on his channel that shows a working, untethered iOS 10 jailbreak. He demonstrates the jailbreak on his iPhone 5, which loads up Cydia no problem.

Prior to releasing the video, he posted a tweet saying that ‘Cydia doesn’t crash on iOS 10’. Let’s hope that the vulnerability isn’t fixed in other iOS 10 betas, and maybe we’ll see an iOS 10 jailbreak in the near future. iOS 10 is supposed to be available later this fall, so maybe we’ll have to wait till then for a jailbreak.

No word on an iOS 9.3.2 jailbreak, and it doesn’t look like we’re going to see on anytime soon. Keep your fingers crossed though, anything is possible.

Update – June 6, 2016 – A new group known as GSMagic claim to be working on an iOS 9.3.2 jailbreak, which they say, will be released on June 10. We’re not sure if this team is just saying so to urge other iOS jailbreak groups to release a jailbreak first, or if they actually are working on a jailbreak.

According to them, the iOS 9.3.2 jailbreak will also work on iOS 9.3.3, but we’re not convinced. They also say that if they cannot make a jailbreak tool by June 10, then they will stop trying. If you go to their Twitter page, you’ll see that they’ve been taunting hackers such as Luca Todesco, who actually has a working iOS 9.3.2 jailbreak.

Update – May 29, 2016 – Yes, that’s right, an iOS 9.3.2 jailbreak exists, but it cannot be yours. Our favorite hacker Luca Todesco has once again created a stir in the jailbreak community, and angered many, by jailbreaking iOS 9.3.2.

Why has he angered people? Well, despite having a working untethered iOS 9.3.2 jailbreak, Luca will not be sharing it with the world. There won’t be a tool that can jailbreak your iOS device, at least, not from him.

He recently shared a video of his iPod Touch running iOS 9.3.2 and jailbroken. As many were asking for proof, he also showed how the jailbreak actually works. The jailbreak is similar to the popular browser based JailbreakMe tool. You didn’t have to connect your iOS device to the computer, instead, the exploit would be injected using Safari.

The iOS 9.3.2 jailbreak that Luca Todesco has, is similar to the JailbreakMe tool. Watch the video below to see the jailbreak in action;

Update – May 24, 2016 – Apple recently released iOS 9.3.2 to the public, and still, we have no jailbreak. Users have been eagerly waiting for jailbreak news, but there hasn’t been anything new.

Rumors and reports are still floating around suggesting that the jailbreak teams, either TaiG or Pangu, will release a jailbreak before WWDC next month. Only time will tell.

Update – May 9, 2016 – Looks like we’ll have to wait longer for a jailbreak on iOS 9.3. Yes, it is possible to jailbreak iOS 9.3, as shown by hacker Luca Todesco, but we will not be seeing a public release from him.

It is still being reported that the jailbreak teams are waiting for Apple to release the final version of iOS 9.3.2 so they can release a jailbreak, but we’re not sure how far that’s true.

Recently, among rising fake jailbreaks, another one has joined the list and we urge you not to fall for them. The new jailbreak is called ‘3K Jailbreak‘ and claims it has jailbroken iOS 9.3.2, 9.3.1 and 9.3. All false claims. Do not download such jailbreak tools as they will both ruin your Windows PC and your iOS device.

Update – April 27, 2016 – Several fake iOS 9.3 jailbreaks are circulating on the Internet, we strongly advise you not to download and try any.

Web sites called Taig9.com and en-pangu.com are circulating fake jailbreaks to unsuspecting iOS users. The tool most likely injects some sort of malware onto your device, which is why you should stay away from them.

As of now, there is no working iOS 9.3 or iOS 9.3.1 jailbreak. When there is one, we will let you know, until then, enjoy your non-jailbroken iPhone, iPad or iPod Touch.

It is being reported by several sites that an iOS 9.3.2 jailbreak could be released at WWDC 2016.

We’re not sure if anyone is even working on a jailbreak anymore, because Apple has moved past iOS 9.3.1 and is now testing iOS 9.3.2. It is possible that the jailbreak teams are now focusing on iOS 9.3.2 instead or perhaps are waiting for WWDC to release a jailbreak.

Apple is expected to talk about iOS 10 and most likely release a developer beta during WWDC this year. The jailbreak teams could thus be waiting for Apple to release the next major iOS update. This way, they can provide a jailbreak for all versions of iOS 9.3, including 9.3.1 and 9.3.2.

Apple recently seeded iOS 9.3.1 to fix bugs that were present in iOS 9.3. According to a new report, jailbreak teams could be waiting for Apple to fix the bugs on iOS 9.3 to release a working jailbreak.

The report says that the release of an iOS 9.3 jailbreak could’ve been delayed due to Apple working on a smaller update. And as suspected, Apple released iOS 9.3.1 with bug fixes.

Now, the jailbreak teams could release an iOS 9.3.1 jailbreak is one is ready. If such a jailbreak tool is ready, now would be a great time to release it.

iOS 9.3 is now available for download and brings with it, several new features. You get the Night Shift mode, TouchID for notes, more 3D Touch shortcuts for apps and a tonne of new improvements and bug fixes.

Now that it’s out, jailbreak teams are probably hard at work trying to release a tool to jailbreak iOS 9.3. We’ve already seen leaks and videos of hackers successfully jailbreaking iOS 9.3 betas. The last beta, is very similar to the public release, which means that a jailbreak is definitely possible.

Unfortunately, the hacker who managed to jailbreak the iOS 9.3 betas, will not be releasing any jailbreak to the public. Therefore, we will have to wait for teams such as Pangu or Taig to come up with a solution. Recently, Pangu released a jailbreak for iOS 9.1, but not many users are on that firmware.

It has been six months since the last jailbreak release, so it’s about time a new jailbreak is released. Hopefully, it’ll be for iOS 9.3 and happen soon. If you want a jailbreak, do not update to iOS 9.3.

Those who don’t want a jailbreak or can no longer wait, should update to iOS 9.3. Between iOS 9.0.2 and iOS 9.2.1, there haven’t been plenty of changes, except for security updates and minor bug fixes. With iOS 9.3, there are plenty of new features and improvements, therefore urging users to upgrade.

We have no idea when an iOS 9.3 jailbreak will be released, but it could happen as soon as 1-2 weeks. If there are any new updates, we will let you know.