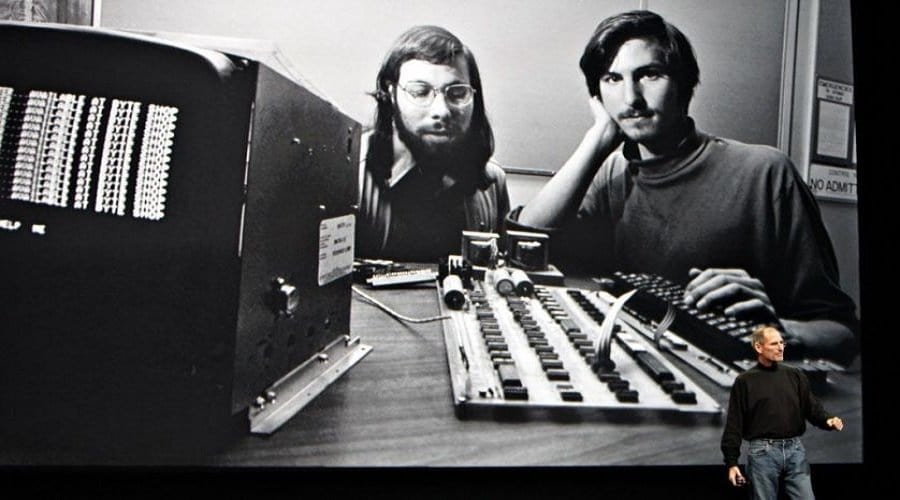 From a Californian garage to 480 retail stores spread out all over the Globe and an income of 18 billion US dollars in the first quarter of this year, Apple made this journey in 40 years, and April 1 2016 is Apple’s 40th anniversary.

It was on this day, April 1st, 40 years ago that Steve Jobs, Steve Wozniak and Ronald Wayne filed partnership papers.

Only a couple of months later, Ron Wayne sold his 10% stake in the company for $800. In the Apple story, Ron Wayne is known as the man who won the lottery but lost the ticket.

It’s only fitting that we commemorate Apple’s milestone, and we’ll do this with a few Apple employees who got together to reminisce about the past.

Apple employees are usually not permitted to talk about their company or products. But a 40th anniversary for a tech company is certainly a milestone worth celebrating, and Apple has been one of the great computing stories of our time.

Forty years is a long enough time period to have seen big changes occur. Six workers from Apple talked about their company, the culture and the things that make it stand out. Some of them were there since Apple’s infancy and the others joined later.

One of the most beautiful things Apple did was to break away from the tradition of only hiring employees with a tech background. The employees at Apple come from various backgrounds: the artist, the musician, someone with a medical background, like Bud Tribble who was with Apple in the early days.

The company culture cultivates in its workers a sense that its mission is nothing less than making “a dent in the universe,” as Jobs once said.

People wonder what it is like to work at the biggest company in Silicon Valley.

Bud Tribble says the company’s DNA is essentially the same today, as it was in the 1980s.

“We felt we were going to change the world. We felt like the products we were making were going to be part of people’s life. And we made them so that we ourselves would love those products,” said Tribble who joined the company in 1980 to work with the original Mac team, and who is now vice president of software technology at Apple.”

“Those constants are a real source of strength and consistency for the company. We had no idea back then that Apple would grow to be the size that it is … . Yet here we are.”

Apple makes everything in-house and nothing is off the shelf.

“There’s beauty in that. You are almost creating art in a way,” said Cheryl Thomas, a senior software engineer who has been at Apple for 27 years.

Greg Joswiak, a veteran Apple employee and vice president on the worldwide marketing team joined Apple in 1986. According to him, “There was a short time that we lost sight,” he said. “We were really trying to make Macs like PCs.”

He said that the return of Steve Jobs in 1997 improved employee morale and fueled the company’s spirit of innovation. The 1997 “Think Different” ad campaign featuring famous icons like John Lennon, Albert Einstein and others also worked wonders.

“PCs and Windows seemed to rule the world. That commercial explained us as a company. I still get goose bumps. We were going to be the ones to watch,” said Joswiak.

Apple faced tough times when the dot-com bubble burst, in the 2000s,. But this was the time when Apple created some of its best and most popular products such as the iPod.

The company just announced a new milestone in January 2016 – that the total number of active Apple devices around the world is more than 1 billion. Its billionth iOS device was sold in November 2014.

This, the employees say fosters a sense of opportunity in the workplace, giving hope and encouragement to the employees who have joined apple in the recent years.

Divya Nag, one such employee, who joined Apple in 2014 said, “It is definitely a big company…but the feeling is so much like a startup.”

Now with all those years of experience, and with customers forever hungry for something new from Apple, the company is preparing to move into something that only Apple could have designed – Apple’s new Spaceship Campus as it is called due to its flying-saucer-like design.

With a smile, Joswiak said, “Apple approaches everything like a product. This new campus is a product.”

According to reports from the media present there, there was not much discussion about Apple’s recent fight with the U.S. government about privacy and security, but the employees are definitely very proud of Apple’s stance.

Joswiak proudly stated, “it would have been easier to acquiesce.”

Apple’s staff is celebrating on Friday afternoon with a beer party. Then they will be back to work on Monday, trying to create more products and making history.

After all, as Thomas said, doing so “does take some time.”

The company ‘s 40th birthday was marked with the launch of the iPhone SE and the latest smaller iPad Pro on Thursday. The 4-inch iPhone starts at $599 in the US and £359 in the UK.