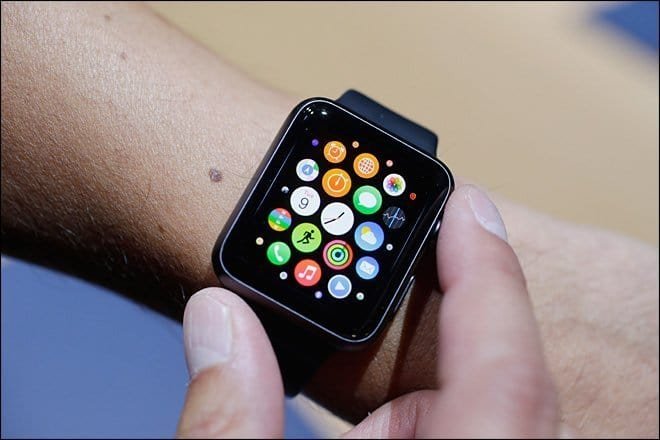 New Apple Watch 2 Rumors: All We Know So Far

A larger 334 mAh battery could help the Apple Watch 2 last longer on a single charge. The original Watch came with a 245 mAh battery.

Leaked photos, of what is claimed to be the battery off of a 42mm Apple Watch 2, show the larger battery. We’re not sure if they are genuine, but if they are, then you’ll be able to use the next gen Watch for longer periods of time.

Looks like we will not be seeing cellular connectivity feature on the Apple Watch 2 after all. According to a new report by Bloomberg, the feature has been delayed because of technical and battery issues.

Apple did have discussions with carrier companies in the United States and Europe, but that it would be delayed till December. Adding cellular connectivity feature to such a small device will drastically affect its battery life.

Instead, this year, the Apple Watch 2 will only feature in-built GPS, apart from other improvements. We might have to wait another year for the Apple Watch to get cellular connectivity.

A new research note was obtained from KGI Securities Analyst, Ming-Chi Kuo, who states that Apple will release two Apple Watch models in 2016. According to him, one model will be a slight improvement over the existing Apple Watch. This model will be same as present, but include better internals.

The second variant will be the new Apple Watch 2 that will include GPS, barometer, better waterproofing, and a larger battery. However, he believes that Apple will introduce LTE capabilities in 2017. Also, a new slimmer design for the Apple Watch can only be expected in 2018.

According to a new report, the next gen Apple Watch 2 will sport a new One Glass Solution display, which will be thinner and lighter than the current gen. In the first gen Apple Watch, Apple has used a Glass on Glass touchscreen.

As this new OGS display will be thinner, Apple could also increase the battery size in the new Watch. However, this method is a little tricky and Apple has faced several issues in production.

Therefore, Apple Watch 2 might be launched in a limited quantity at first.

LATEST – The latest rumor suggests that the next gen Apple Watch 2 will be getting GPS as well. This would mean that the new Watch would be able to be completely independent from the iPhone. It would have cellular connectivity and GPS for tracking workouts when not connected to the phone.

Also, the Workout app will supposedly be able to track more data on swimming, which could mean that the new Apple Watch will also be more waterproof.

Update – June 16, 2016 – According to a new report by DigiTimes, Apple will most likely launch the Apple Watch 2 alongside the iPhone 7 and 7 Plus announcement. The iPhone 7 event is pegged to happen in the month of September.

Supply chain sources told the Taiwanese trade publication, which has been both right and wrong on several occasions before. The Sources told the publication that Apple has ramped up gathering of parts for the new Watch 2. And Apple has ordered more than expected, which means they’re pretty confident that the Watch 2 will do better and are very committed.

Update – May 10, 2016 – In a recent interview with CNBC, Apple CEO Tim Cook stated that the company is working on making the next Apple Watch even better.

He stated that the Watch will keep getting better and that the company is still learning. According to him, in a few years time, people will wonder why they didn’t get the watch before.

“You’ll see the Apple Watch getting better and better. We’re still in learning mode. We’re learning fairly quickly, though. We know a lot more than we did a year ago.”

“I think that in a few years we will look back and people will say, ‘How could I have ever thought about not wearing this watch?”

Update – April 27, 2016 – A new report suggests that the next generation Apple Watch will feature true cellular connectivity. This means that you’ll be able to make calls, send texts and connect to the internet without the need of your iPhone.

Few smartwatches from LG and Samsung already offer 3G or 4G connectivity. Therefore, it would make sense for Apple to include the feature in the Apple Watch 2. The Wall Street Journal has heard from sources that Apple is working on bringing cellular connectivity and a faster processor to the next Watch.

Update – April 14, 2016 – The Apple Watch 2 may not do as well as Apple hopes, says Ming-Chi Kuo of KGI Securities. He has been known to have a good track record when it comes to Apple hardware and has been right several times.

In his latest research note, he states that Apple Watch sales will decline in 2016, despite the launch of a new updated device. One of the main reasons for this, is that the Apple Watch 2 will not see any design changes. Instead, there will be updated internals, a possibly thinner design, improved battery, and a FaceTime camera. It is also rumored to work without an iPhone.

He believes that the Apple Watch 2 will begin production in quarter 3 of 2016 and will launch with the iPhone 7 in September.

Another report that came out last week stated that the next-gen Apple Watch will be at least 40 percent slimmer. We’re not sure if Apple can managed that without affecting battery life.

March 18, 2016 – Apple will be unveiling new Apple Watch bands on March 21. The company sent out invites for the special event earlier this month. We also expect to see the all new 4 inch iPhone SE, new iPad Air 3 or iPad Pro mini, updates to Macs, iOS 9.3 and watchOS 2.2.

Recent rumors still suggest that the Apple Watch 2 will be released in Q2 2016. According to the Chairman of Quanta, Barry Lam, the next-gen Apple Watch will be unveiled towards the end of Q2 2016.

Quanta was the company that help Apple manufacture the first gen Watch. We believe that Apple will launch the Apple Watch 2 in September 2016.

Update -March 06, 2016 – It still looks like that Apple will not be releasing a new improved Apple Watch 2 with upgraded internals and a FaceTime camera anytime soon.

We may only see the new smartwatch in September this year, with Apple following yearly release cycle. Reports did suggest that Apple will instead launch an updated Watch model with newer straps and software.

Recent rumors suggest that Apple will not be releasing the Apple Watch 2 in March this year. Instead, the current gen models will receive new bands and watchOS 2.2. That’s what’s going to happen.

However, several online retailers and brick-and-mortar stores are selling the Apple Watch at significant discounts. Are they getting rid of their inventory to make space for new ones? It could be that these retailers are preparing for new shipments of an updated Apple Watch, instead of a new model.

British online retailer Currys PC World is giving £50-120 discounts on the Apple Watch. We’re not sure if this means that they’re making room for the Apple Watch 2, or just trying to have a good sale.

A March 15 event is said to unveil the rumored iPhone 5se, the new Apple Watch updates, iPad Air 3 and other software upgrades. Let’s see what Apple has to offer.

The second gen Apple Watch 2 will not be coming in March this year, according to a new report from TechCrunch.

Matthew Panzarino from TechCrunch has heard from several sources that Apple may not unveil a new Apple Watch model in March.

Instead, a slightly improved version of a FaceTime camera is what Apple will announce this year. There won’t be any changes to the design, case or straps.

I’VE NOW HEARD A BIT MORE THAT SUGGESTS THAT APPLE MIGHT SHIP A MINOR REVISION OF THE APPLE WATCH THAT INCLUDES A FACETIME CAMERA AND NOT MUCH ELSE — BUT STILL THAT IT WOULD NOT BE A FULL “WATCH 2.0” WITH CASING CHANGES AND MAJOR IMPROVEMENTS.

Previous rumors had suggested that Apple may be having a special event in the month of March where it would unveil the Apple Watch 2. Supply chains had also mentioned a March 2016 release date, but it looks like that may not be the case. The latest gossip from the Supply chains is that there isn’t anything substantial going on.

Apple should have started production in late 2015 if it had planned to release the new Apple Watch in March 2016. Yes, there have been rumors stating that Apple has indeed started production, but that may be entirely correct.

There haven’t been any chatter regarding new software for the second gen Apple Watch. Although Apple has been releasing updates to watchOS 2, there hasn’t been any significant update yet. As per the reports, the second-gen smartwatch will be a separate piece of hardware. It will have its GSM antenna, better battery life, faster hardware and maybe a slight design refresh.

The Apple Watch 2 will come out this year, but it may not be released in March. The report says that a September release alongside the introduction of iPhone 7 and iPhone 7 Plus is more plausible. Apple might instead refresh the iPads and release the rumored 4 inch iPhone in March.