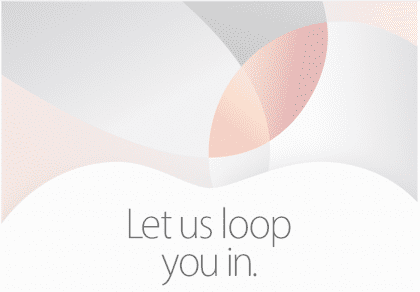 Apple has officially sent out invites to the media and the press for a special March 21 event, where we could see the iPhone SE, iPad Air 3, new Apple Watch bands and more.

The event will start at 10 AM PT at the Town Hall Auditorium in 1 Infinite Loop, Cupertino. That would be Apple’s HQ if you were wondering. The Town Hall holds only around 300 people, so yes, this isn’t a major event, for the company.

Rumors about a mid or late March Apple event have been flying around for some time now. We finally have confirmation from Apple themselves, which is good, as we will be prepared.

Apple sent out an invite with the words ‘Let us loop you in’, and like always, we have no idea what it means. The graphics on the invite are colorful and depict the colors Gold and Rose Gold. Are we going to see new Apple Watch bands in that color? Who knows!

For the March 21 event, Apple has been said to release a new 4 inch iPhone SE, which would have the same hardware as the iPhone 6 with TouchID, Apple Pay, Live Photos and a sub $500 price tag. The 4 inch iPhone will also borrow design cues from the iPhone 6.

Apart from that, Apple will also update the iPad Air line, with a mini iPad Pro like 9.7-inch tablet that would have most of the features of its bigger sibling. Will it be called the iPad Air 3 or iPad Pro mini, we have no idea.

That’s about it. That’s all the new things we expect from the March 21 Apple Event. What are you most excited about? The new 4 inch iPhone SE, the iPad Pro mini or others?