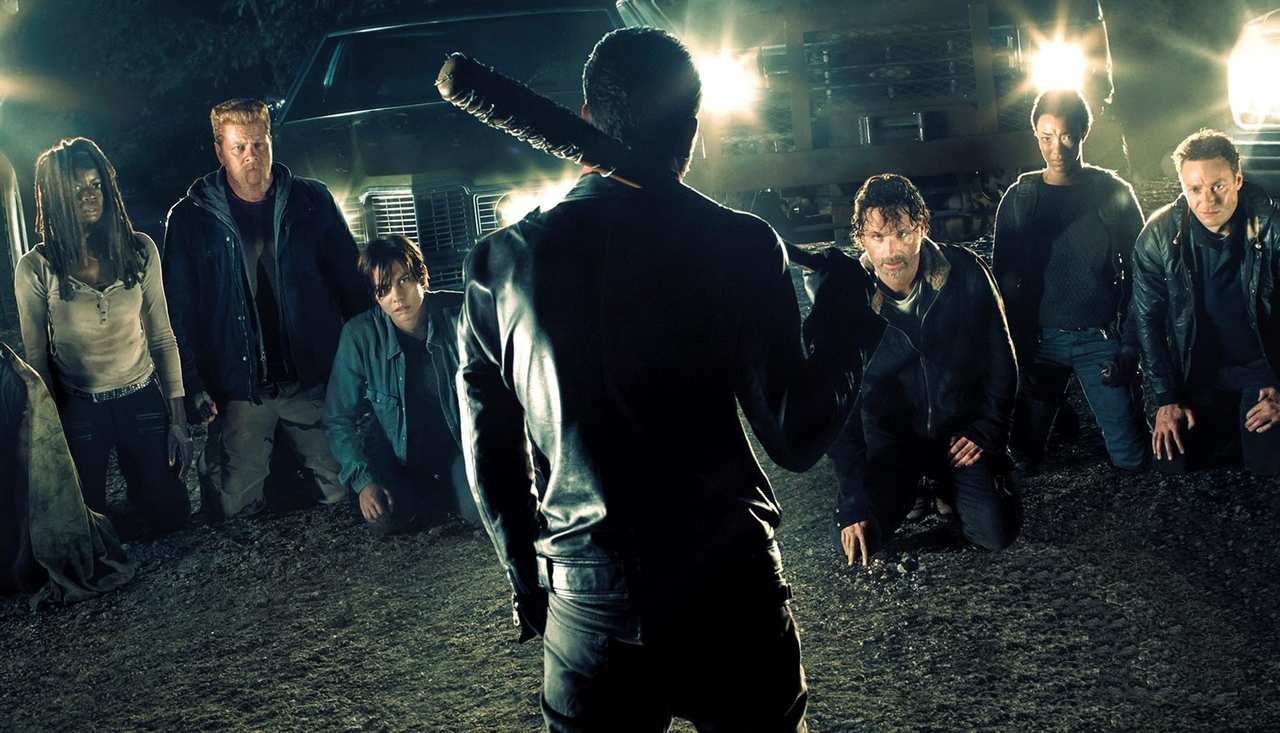 We’re getting closer to finding out how that Walking Dead season 6 cliffhanger plays out.

A new trailer for The Walking Dead season 7 is here and it’s packed with juicy hints about what fans can expect. It’s also super Negan-centric, which is fine by us because the season 6 cliffhanger left us begging for answers. In the 30 second The Walking Dead season 7 trailer, we get a look at some of Negan’s rules, setting the tone for what’s to come, including the chilling promise: “I am everywhere.” Shiver.

Who did Negan kill?

During a panel at the recent San Diego Comic-Con, Walking Dead star Andrew Lincoln confirmed that the Walking Dead season 7 premiere will reveal who Negan killed when things were left dangling at the end of the season 6 finale. Variety reports that Lincoln explained, “It’s a really sh**ty start to the season [for the characters].”
Chris Hardwick, who moderated the panel, asked executive producer Robert Kirkman about the cliffhanger, with Kirkman reassuring fans, “It’s definitely worth the wait. It’s a fantastic premiere to a fantastic season.”

Turns out Jeffrey Dean Morgan, who plays Negan, was in the dark about the season 6 finale’s outcome too. He told EW recently that even he didn’t know his victim’s identity, explaining, “They did not tell me. I don’t know that anybody knew on that particular evening, and if they did, no one has copped to me. But I certainly didn’t know.”

Morgan also gave a glimpse into what fans can expect, and they’re in for a wild ride, as he noted: “And that ending — or this beginning, I should say — is jarring. It’s a reset on The Walking Dead world and it’s f—ing Negan’s world now, you know? It’s a lot.”

As for the fans upset with the season 6 cliffhanger, Morgan issued this warning about season 7: “And I’ll say this, you have to be careful what you wish for, audience, because you’re going to get those answers answered and more, and you’re probably not going to be happy with it.”

While that’s probably beyond true, we can’t wait to see how it all plays out. We’ve seen plenty of Walking Dead rumors and spoilers, but we’re excited to see how things unfold.

A few new posters for The Walking Dead’s upcoming season also give a glimpse at the terror Negan will be bringing, with one tagline reading: “The price will be paid” and another showing Negan, bat in hand, with the line, “The Next World.”

Look for the story to unfold when season 7 of The Walking Dead kicks off October 23rd on AMC.