So there it is, another season of the Walking Dead has finished and with lots of hype leading up to the finale, there’s mixed feelings about whether or not it delivered. Some (not many) feel that is was the perfect cliff-hanger to head into season 7, whereas others were underwhelmed and frustrated by the conclusion.

If you take away the ending, as an episode it was good, but it’s importance to deliver as a finale is why it was a bit ‘meh’. Throughout the entire 90 minutes tension was continually building as Rick and a small group get in the RV to get an ailing Maggie to the Hilltop. As they travelled down a number of different roads they would be blocked off by a small group of the Saviours, lead by the voice actor of Trevor from GTA V (Steven Ogg). These parts worked pretty well to maintain the intensity, but overall nothing really happened.

Realising they aren’t going to get through, they decide to go into the woods on foot to avoid the Saviour’s roadblocks. This plan lasts all of about 5 minutes as they begin to hear the creepy whistling noise the Saviours all make, and suddenly they’re surrounded by a tonne of them. Any fan who keeps up with their Walking Dead news will know that Negan arriving is rumoured to be bad news for a big character, so this is it, the game-changer. Or so you would think. 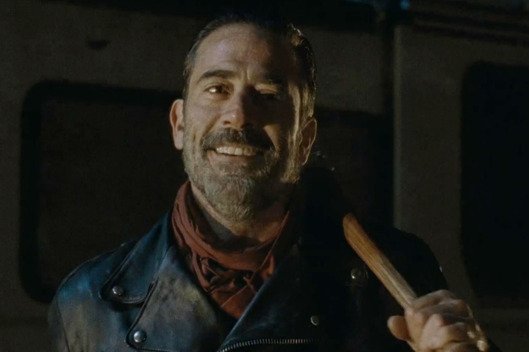 After a not so polite hello from the Saviours we find our group of protagonists on their knees in front of their beloved RV, out steps Negan (Jeffrey Dean Morgan) with his barb-wire bat ‘Lucille’ in hand. Although most don’t agree with the final scenes of the episode you can’t deny how awesome he is, this guy is bad-ass and will definitely make season 7 one to watch. So anyway, out he steps and confronts Rick about killing his men, and goes on to tell him that there will be punishment.

Long story short he’s going to kill one of the group kneeling in front of him, this is what we’ve been waiting for, a big loss will be an awesome revenge story for the upcoming season. Glenn is one of the group, and because he’s killed off by Negan in the comics we would assume he’s the candidate for some batting practice.

After a short bout of eeny, meeny, miny, moe we the viewer are now in the point of view of the selected victim, and following a number of brutal blows blood begins to come down the screen – sort of like in the opening of James Bond movies but better.

The credits roll. Wait what? So that’s it? No emotional ending or turmoil, just a cliff-hanger that leaves us no closer to knowing which key character has just met a gruesome end. As a cliff-hanger it works well yes, but it’s safe to say the majority of fans wanted and needed to know who gets killed.

Personally I liked the episode in general, but it’s hard to deny that the ending was frustrating, a revenge plot leading into the next season would be great for the narrative and completely certify Negan as the best villain of the series so far. Oh well, we’ll have to wait until October 9th to find out who found themselves on the business end of Negan’s bat.

The Walking Dead season 7 will begin on October 9th 2016