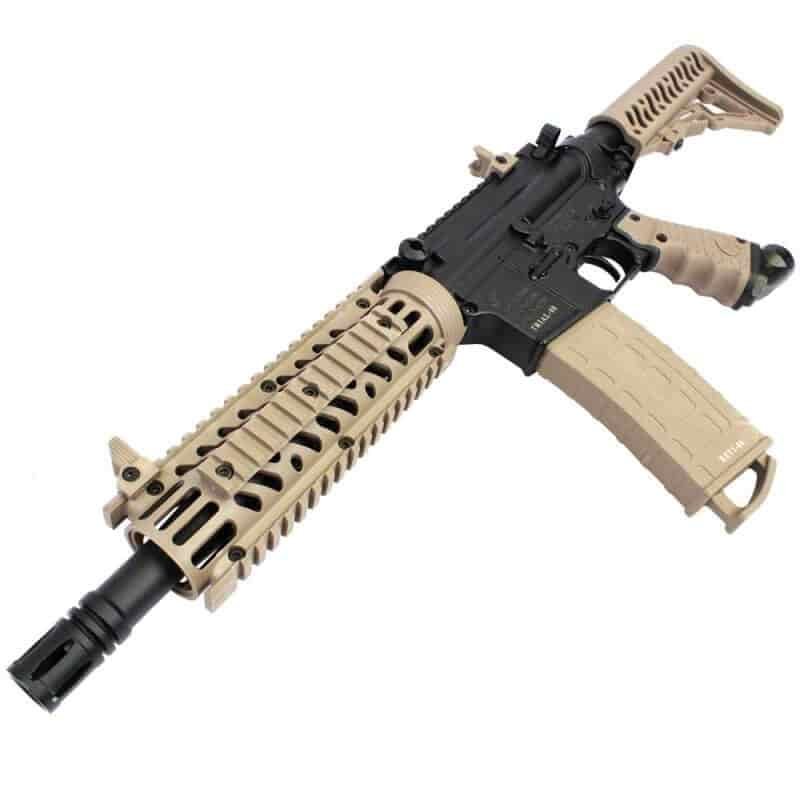 Products Mentioned In This Review:

Note: The Tippmann TMC is great for woodsball, if you’re looking for something for speedball I’d recommend looking at the Empire Axe.

What Your Purchase Includes: 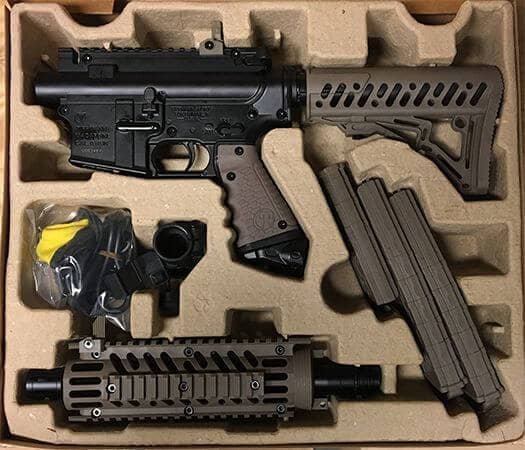 When you purchase your Tippmann TMC Magfed Paintball Marker this is what you’ll see upon opening the box. Included items are as follows: 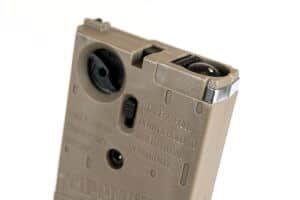 The magazines that the Tippmann TMC use have a carrying capacity of 19 balls (Initially 20 but Tippmann has retracted this and said 19). These magazines are significantly sturdy and in no way cheap plastic material, they can definitely take some abuse. What’s even better about them is that they are very well priced compared to other Magfed magazines. You get two magazines on Amazon.com most of the time a single magazine for magfed markers cost upwards of 30 dollars. Absolutely crazy how well Tippmann catered to those on a budget with the Tippmann TMC Magfed paintball marker. 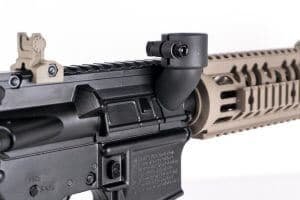 While magfed is the main purpose of this gun Tippmann understands that players like having the ability to customize, so giving us the choice to at any point forego our magazines and throw on a hopper is a nice plus for players. The hopper feed neck is included with your purchase of the Tippmann TMC Magfed paintball marker so don’t worry about having to dish out more money to pick one up. A nice feature included on the hopper feed neck is the clamping neck. This allows for you to be able to attach any hopper you want and be sure that it fits securely as you can tighten it to meet your needs.

How To Change From Magfed to Hopper:

Going from using magazines to the hopper is a very simple and tool-less process that takes less than a minute.

If my written description of these steps sucked (more than likely) here’s a visual example from ANSGear:

PS: Don’t forget to put your dummy magazine in when using your hopper!

The rubber trigger frame on the TMC is something that everyone who’s used it can not stop raving about, including myself. If you have the opportunity to get your hands on one of these you’ll quickly notice how nice the grip on your hand is. Although it’s hard to explain through text, I’ll give it a shot. The finger grooves around the handle of the grip are extremely comfortable, fitting virtually any hand and providing a cushioning yet firm base for the palm and fingers. The trigger is the same as the Cronus’ Easy Pull Trigger – very smooth pull with just the right feedback. 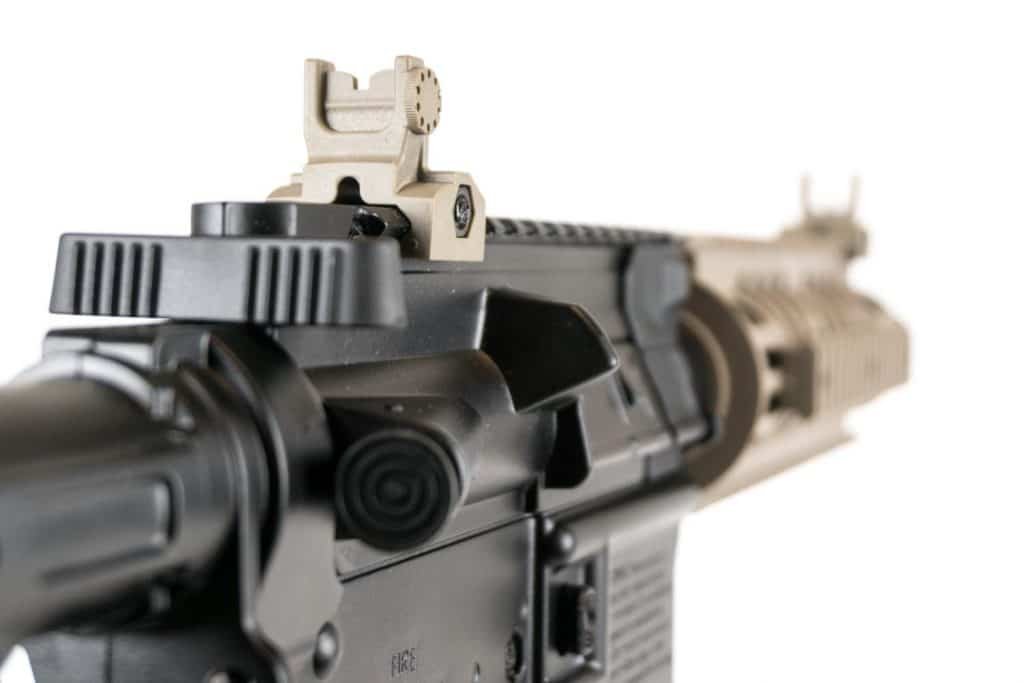 The front and rear adjustable sights are a great addition to this already solid marker. The TMC is already a very authentic AR-like marker and Tippmann adding the front and rear sights only furthers this AR-like marker they were trying to create. Having sights is a premium in paintball that usually you’d have to pay for. Tippmann putting them on for you is another way they’ve packed great value into this marker.

If you guy’s have been following my reviews for some time now you guys know that I like to always throw in what I think you guys as buyers should be wary of and what you should pick up when purchasing your gear in order to maximize your enjoyment and keep your stuff running smooth. With the TMC I have found a few things that I think could help for a more pleasurable experience when using it.

Get a Remote Line – For those of you who don’t what a remote line is, it’s common in woodsball and MilSim for players to carry their HPA/C02 tanks on their back and have a cord attached to that which connects and feeds the air into their gun. With the TMC I would highly recommend picking one up because you already have a stock on your TMC and having that pressed up against you with your air tank just below makes for an awkward feel. Also would recommend just for extra mobility, something on your back wont get in front of your way.

Buy a Few More Magazines – While it is great that Tippmann gives you two magazines when you purchase the TMC marker, that means you only get to carry 38 paintballs on you. Could you imagine going to play a game with only 38 paintballs? I know some players who use that much in 3 seconds, playing with 38 paintballs either means you have the trigger discipline of a USMC Sniper or you’re out of ammo, and I think it’s safe to say it’ll be the latter more often than the former.

The great news is that Tippmann has made the magazines for the TMC at a great price (unlike most of the competition) so you can really load up on a good amount of them. I would recommend picking up 4 to 6 more, this would put you at a good enough amount in my opinion to last you a game or possibly two.

There was one thing I heard about TMC magazines that I’ve personally never seen or experienced but nonetheless felt I should include it as it is something that may happen to any of you guys. If a ball does jam in the magazines, you won’t be able to unjam that mag until after the game when you’re off the field. So essentially removing one magazine from your carrying capacity for the entirety of the game you’re playing. While nothing too severe it can suck if this happens when you’re getting low on paint out there. This is also why I rated the Tippmann TMC a 4.5, this flaw does impact its use in a minor way.

The Tippmann TMC Magfed Paintball Marker is perfect for those on a budget or those who are looking to dip their toes into magfed. For its price this is a perfect paintball gun for under 200 dollars. Tippmann has always been well known for providing sturdy, reliable and efficient gear and the TMC is no different. Giving players the ability to customize and tune the TMC to their liking while still maintaining the authentic AR feel is something many look for and this has answered their calls. Tippmann has made sure to pack this TMC bundle full of value. You won’t be able to find something that’s such a great bang for your buck as this.

If you’re interested in picking up the Tippmann TMC Magfed Paintball Marker you can purchase it here at Amazon.com

Enjoyed the review? Think I missed out on anything or disagree? Let me know in the comments! If you provide enough insight I might add you into the article!

One of the most common things we’re asked about at Men’s Gear is our stance on knives. We cover a lot of them, so we can understand why this comes…