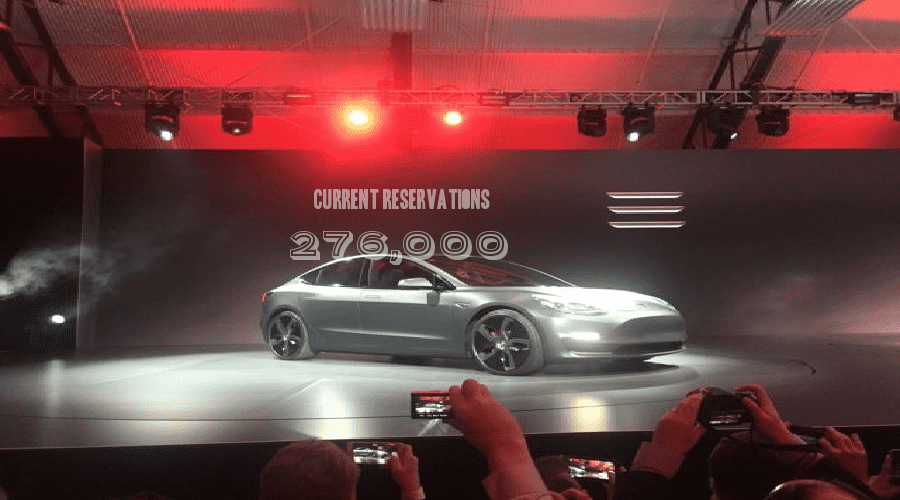 The company didn’t expect such great preorder interest in the new Tesla Model 3 electric car, according to Elon Musk, the company CEO.

The lines of people camped outside to pay the $1,000 deposit on this model indicated that the preorder number would be big; but nobody was prepared for the shocking number.

This goes beyond all expectations, including analyst predictions. A Time survey said that preorders might be around 55,000 in the first 72 hours.

This preorder news took Tesla’s stock to a six-month high on Friday, and that was before the latest pre-order numbers were announced by Musk.

This means Tesla now has $276 million in the bank only from initial deposits.

Token of appreciation for those who lined up coming via mail. Thought maybe 20-30 people per store would line up, not 800. Gifts on order.

Tesla’s factory in Fremont, California will be busy for the next few years to keep up with this immense demand. But this level of demand may be a problem for the company.

In the past, Tesla has never made more than 100,000 cars and its factories may not be equipped for higher level of production. With the preorders going higher with each passing day, the wait times are soaring and the estimated delivery time for the latest preorders may even be 2020, according to analysts. Cairn Energy Research Advisors predict that Tesla will ship 212,646 Model 3 cars by the end of 2019.

Tesla hasn’t specifically stated how the allocation for Model 3 cars is going to be. However, it did indicate that customers in California might get preference (since they are near Tesla’s headquarters). Former owners of Model S and Model X cars might also be on the preferred list. It’s too soon to know.

According to Musk, there will be another update, when the first full week’s order figures will be shared.

While it is impossible to predict the future preorder numbers for Model 3, if the current level of demand is anything to go by, we might soon be talking about 500,000 orders and more.

The general consensus is that Tesla Model 3 customers may forgive wait times and even delays, as it means being part of an experience, a movement. Find out more about Tesla Model 3, an electric car that costs $35,000.