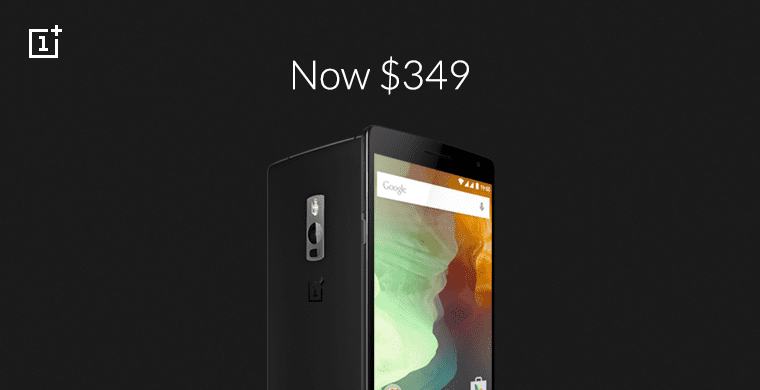 After making the OnePlus X ultimately invite free, the company announced yesterday that they’d give the OnePlus 2 a permanent price cut. The price cut will be applicable throughout the world. Those who purchased the OnePlus 2 for its introductory price of $389 in the last 15 days will get a $40 refund, in their respective currency.

The company also introduced free shipping for all orders over $100 on their website. According to OnePlus, the cost of producing the OnePlus 2 has gone down due to higher production of parts. This is why they’ve reduced the OnePlus 2 price to $349.

Known as the flagship killer, the OnePlus 2 is a great phone for the price. There’s no other similarly spec’d phone that you could get at this price. You get a Snapdragon 810 processor, 3GB of RAM, 5.5-inch 1080p display, fingerprint scanner, 13-megapixel camera and 64GB of internal storage. The 16GB version is no longer available.

OnePlus will also give a free StyleSwap cover or a OnePlus X Case to all buyers. You can buy the OnePlus for the discounted price, directly from OnePlus, no invite required. Other online retailers should show the new OnePlus 2 price.

The OnePlus 2 marshmallow update will be released in the first quarter of 2016 and will include the Marshmallow API for the fingerprint sensor.

OnePlus had announced few months ago that the OnePlus One, OnePlus 2 and the OnePlus X, will be receiving the Android 6.0 marshmallow update. Although, we’ve known this for a while, an estimated release date has now risen.

A post on Chinese social media site Weibo, reveals that OnePlus will soon be inviting fans to test a beta build on Android Marshmallow. Due to the message being posted on Weibo, the program is probably only for users in China.

The Chinese versions of the OnePlus handsets run Hydrogen OS, which doesn’t include the Google apps. Except the OnePlus One, that runs on Cyanogen OS. In the teaser image that OnePlus posted, with all the flat icons, you’ll see H2 OS written at the bottom. Also, not all OnePlus smartphone owners will be able to test the new marshmallow build.

To be eligible to test the beta marshmallow build, users would need to own the OnePlus 2. You’d also be available online for 30 hours a week, be willing to flash software updates twice a week and provide regular feedback and bug reports. Previous beta testing experience would be a plus. You can sign up using the source link.

Recently, the OnePlus 2 received Oxygen OS 2.2.0 update with several improvements and bug fixes. Oxygen OS is a slightly themed version of Android 5.1 Lollipop. It has all the goodness and speed of the stock Google Android experience, with added extra features.

The OnePlus 2, OnePlus X and the OnePlus One are most definitely getting the Android marshmallow update. However, the release date has still not been confirmed. The beta testing stage will last a month or two, after which the updates should start to roll out.

As OnePlus promised, all their devices will be updated to Android 6.0 marshmallow in the first quarter of 2016. First in line would be the OnePlus 2 marshmallow update, followed by OnePlus X and then the OnePlus One.