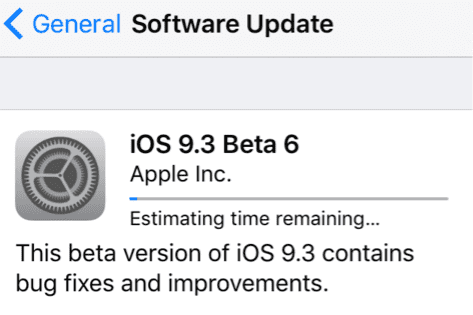 Apple has released iOS 9.3 beta 6 to registered developers and those who signed up for the public beta program.

This release was quite unexpected and could be the last in the series of betas. It hasn’t even been a week since the release of iOS 9.3 beta 5, which brought along full Apple Pencil support and other minor changes.

This week iOS 9.3 beta doesn’t seem to bring anything new to the table and could be the last beta before iOS 9.3 GM. It has been over two months since Apple released the first beta of iOS 9.3. The iOS 9.3 beta 6 carries the build number 13E5231a and weighs around 38 MB.

Apple is scheduled to release iOS 9.3 to the public later this month. The iOS 9.3 update is a major one since the release of iOS 9 and features a new Night Shift mode, TouchID for Notes and plenty more. Stock apps such as Weather, Settings, Compass, Health, App Store, and iTunes Store, get more 3D Touch quick actions.

iOS apps such as Apple News and Health will see improvements. Also, Apple Music for CarPlay will get new features. iOS 9.3 also allows a user to connect multiple Apple Watches to one iPhone while the Watch is running watchOS 2.2. Apple also released the watchOS 2.2 beta 6 alongside the latest iOS 9.3 beta.

You can download iOS 9.3 beta 6 from iOS developer portal if you’re a registered developer or participated in the public beta program. If you’re already running iOS 9.3 beta 5, then you can update via Over-the-air.