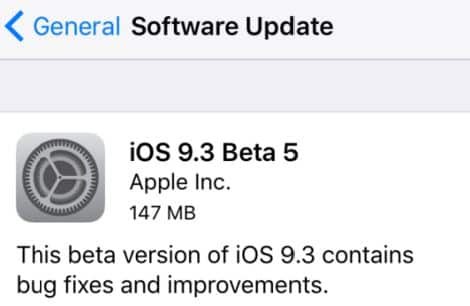 Apple has seeded the 5th iOS 9.3 beta to registered developers, and the latest iOS 9.3 beta 5 includes bug fixes and improvements.

The last iOS 9.3 beta was only released 9 days ago. Looks like Apple is pushing to finish testing iOS 9.3 and be prepared for public release later this month. Apple will release iOS 9.3 to the public during a special event that has been reported to take place in the third week of March.

In the latest iOS 9.3 beta, Apple has brought back the ability to use the Apple Pencil to navigate and scroll on the iPad Pro. This functionality wasn’t present in early iOS 9.3 betas, but it’s back now.

Another change in the latest beta, is the way how iOS notifies you of toggling Night Shift mode on and off. Previously, when you toggled the Night Shift mode, a pop-up used to appear, now, it’s more subtle and clean, showing up at the top of the Control Center.

The last few betas didn’t include any major new changes, but subtle UI modifications such as a new icon for Night Shift mode. Users are also reporting battery improvements and better performance in the latest beta.

The main new feature of iOS 9.3 is the Night Shift mode, TouchID passwords for the Notes app and new 3D Touch shortcuts for apps. CarPlay also gets new features such as improved Apple Music, and Nearby in Maps.

If you’re a registered iOS developer, you can download the latest iOS 9.3 beta 5 from Apple’s developer portal. Those who’re already running iOS 9.3 beta 4 will be notified about the update. The beta update weighs 147 MB via OTA.