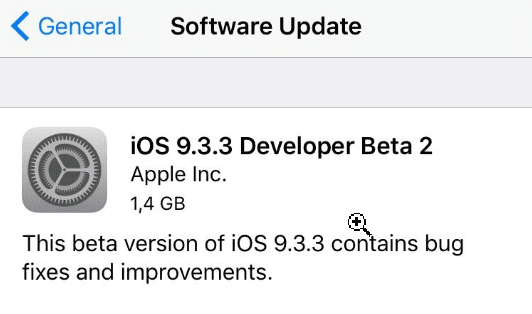 The first beta of iOS 9.3.3 was released two weeks ago and did not include any major bug fixes. Even the previous public release, iOS 9.3.2, was only a minor update. iOS 9.3.2 was released three weeks ago, and we expect Apple to release iOS 9.3.3 to the public before WWDC 2016.

Just like the first beta, the second iOS 9.3.3 beta doesn’t come with anything new. As Apple notes in the release notes, this beta only fixes bugs and provides improvements. Developers who are already running the first beta, can get the new one via OTA or download it from the Dev center.

Interestingly, Apple has also released iOS 9.3.3 beta 2 for the 9.7 inch iPad Pro. Why’s that interesting? Well, previously, when Apple released iOS 9.3.2 to the public, some users ended up bricking their 9.7 iPad Pro when installing it. Apple had to withdraw that release as the number of bricked iPad Pro’s started to increase.

A stable version of iOS 9.3.2 was recently released only for the iPad Pro, which means the issue has been fixed. Therefore, a new beta for the iPad Pro is also available now for testing purposes.

Apple’s WWDC 2016 is all set to start in the next week, and it has been reported that the first iOS 10 beta will be released soon after the event is over. According to a recent report, iOS 10 will not bring a lot of new features, but will most likely be an update similar to iOS 9 for under the hood improvements.

Whatever the case, it looks like the final version of iOS 9.3.3 could be released to the public very soon. For those wondering about a jailbreak, a recent rumor suggested that an iOS 9.3.2 jailbreak tool would be released on June 10. We’re not so sure about that, but let’s wait and find out.